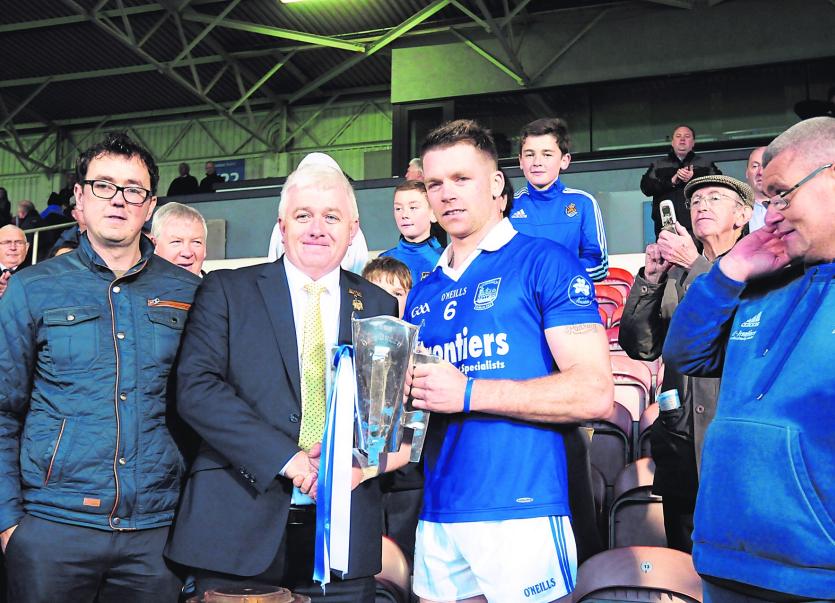 Can Padraic Maher and the Thurles Sarsfields be stopped?

Will lightning strike twice? That's the question. The circumstances are eerily familiar. In 2011 an all-conquering Thurles Sarsfields team arrived in Semple Stadium for a semi-final chasing a third consecutive county title. Clonoulty-Rossmore, however, had other ideas and beat the defending champions with five points to spare. David Kennedy and Lar Corbett saw red and on the day the questions came much easier for Thurles Sarsfields than the answers.

On Sunday next Thurles face Clonoulty-Rossmore in a semi-final, once more, at Semple Stadium and, once more, Sarsfields are chasing a three in-a-row.

Since losing to Nenagh Éire Óg in 2013 (round one) Thurles have played eighteen games in the county senior hurling championship and won seventeen of them - Sarsfields lost to Kiladangan (0-12 to 3-15) during the round robin phase in 2015, but their progression to the knock-out stages had already been assured.

Other than that slip up the numbers are staggering - in seventeen games Thurles have scored 27-363 while conceding 15-222; that’s an average winning margin of 10.4 points.

The only club to get close to Sarsfields during that time were Nenagh Éire Óg - in the 2014 quarter-final Thurles required extra-time and a last minute free from Aidan McCormack to progress while a point separated the sides once more in the 2015 county final. Drom & Inch came next closest in 2014 when losing by three points in the last sixteen.

In 2016 Thurles Sarsfileds dealt with the threat of Roscrea with twenty-one points to spare, Éire Óg Annacarty-Donohill with five points to spare and beat Borris-Ileigh twice; most recently in last Saturday’s quarter-final (2-22 to 0-13).

That does not make for heartening reading for Clonoulty-Rossmore, but the West champions are no slouches themselves. In their divisional campaign Philip Quirke’s men took care of Knockavilla Kickhams and Éire Óg Annacarty-Donohill while Clonoulty also topped a Roinn I group which featured Kilruane MacDonagh’s, Lorrha and Portroe.

Clonoulty-Rossmore, who are coached by Donach O’Donnell, then put away Mullinahone in a composed display on Sunday last (1-18 to 1-10).

Clonoulty-Rossmore were left heart-broken in 2010 and 2011 when the club lost consecutive county finals to Thurles Sarsfields and Drom & Inch respectively and would dearly love an opportunity to show what they can do on the greatest of stages.

Clonoulty-Rossmore lost the 2014 semi-final to Loughmore-Castleiney and came undone last season against Thurles at the quarter-final stage (1-14 to 1-23). Clonoulty started that clash in enterprising mood and led 0-7 to 0-5 before Sarsfields upped their game a gear or three and hit 1-7 without reply. How will Clonoulty-Rossmore respond when Thurles Sarsfields ask the more serious questions on Sunday?

This clash is sure to capture the imagination - neither has ever collected the Dan Breen Cup while Kiladangan are chasing a first-ever appearance in the decider. For their part Killenaule were runners-up in 1932 and 1942 and this weekend will be making a first appearance in the last four since 2007; Kiladangan lost out in the last four as recently as 2013 when succumbing after a replay to Nenagh Éire Óg.

Irrespective of their historical pedigree Kiladangan and Killenaule have arrived in the semi-finals as Roinn I group winners and are due the utmost respect.

Kiladangan, especially, are in particularly good form and raised eyebrows right across the county on Sunday last when taking care of Drom & Inch (2-18 to 1-17) in the quarter-finals.

Killenaule, however, will take heart from the fact that their talisman John O’Dwyer is in sensational form and by the fact that they got the better of Kiladangan, albeit narrowly, in 2014 to the tune of two points (1-13 to 0-14).

All four of Sunday’s semi-finalists are Roinn I group winners with Killenaule getting the better of JK Bracken’s (3-15 to 2-5) before drawing with Upperchurch-Drombane (0-20 to 1-17) and Drom & Inch (4-13 to 2-19) - they progressed on the basis of a healthier scoring difference. In the quarter-finals Killenaule looked after Kilruane (2-20 to 1-20).