15 men up: entire Tipperary team nominated for All Star awards 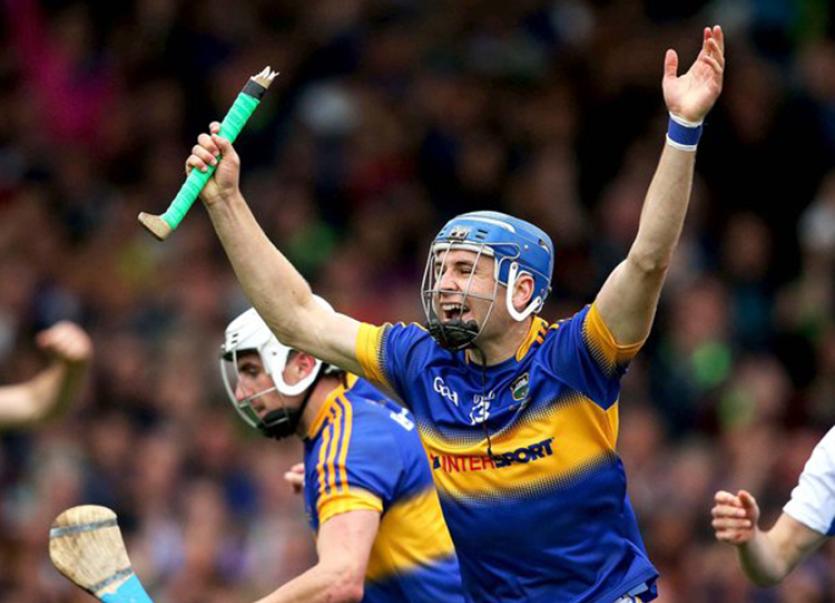 Tipperary's John McGrath is nominated for an All Star award.

The entire Tipperary All-Ireland winning team has been nominated for a 2016 GAA-GPA Opel All-Star hurling award - the Premier County players dominate the shortlist (forty-five players). Waterford earned nine nominees, Kilkenny eight, Galway six, Clare two and Wexford two while Cork and Limerick had one player nominated. In 2010, when Tipperary last won an All-Ireland title, the county earned fourteen nominations. Indeed, never before has an entire team been nominated for the prestigious honour.

The shortlist for the hurler of the year award has also been finalized - Tipperary’s Pádraic Maher and Séamus Callanan will battle it out with Waterford’s Austin Gleeson. Meanwhile the candidates for the young player of the year award are Ronan Maher (Tipperary), Austin Gleeson (Waterford) and Shane Bennett (Waterford). These awards are voted on exclusively by the playing body (GPA members) while the All Star selection will be chosen by a panel of sports journalists and pundits. The team will be selected next month with the awards presented at a banquet in Dublin’s Convention Centre on Friday, November 4th.

Spare a thought today for 34-year-old Eoin Kelly who won six All Stars during a wonderful inter-county career for Tipperary, but who is this week nursing a cruciate knee ligament injury which may end his hurling career - Kelly was injured while lining out for Mullinahone against Clonoulty-Rossmore in last weekend’s county senior hurling championship quarter-final. Eoin Kelly announced his retirement from the inter-county scene following the 2014 season (63 championship appearances).

Since the All Star scheme was inaugurated in 1971 Tipperary have won 89 awards - Kilkenny lead the field on 179 awards with Cork second on 105 and Tipp third.

See below for a county and positional breakdown of the All Star winners (1971-2015).

Prior to the development of the All Star awards scheme the Cú Chulainn awards, run under the auspices of Gaelic Weekly magazine, ran from 1963 to 1967. During that period Tipperary won twenty-six awards.

If anyone needed reminding how far Tipperary football has travelled in recent years they were provided with a telling yard stick on Thursday morning when five of Liam Kearns’ senior outfit were nominated for Open-GPA All Star awards while Jimmy Feehan and Josh Keane were shortlisted as young footballer of the year candidates alongside Mayo’s Diarmuid O’Connor.

Just eight counties, all of which made it as far as the All-Ireland quarter- finals, were represented among the forty-five nominations - unsurprisingly Dublin and Mayo lead the nominations with eleven each. Brian Fenton (Dublin), Ciarán Kilkenny (Dublin) and Mayo’s Lee Keegan have been nominated for the footballer of the year award.

The footballer and young footballer of the year award will be decided by the members of the GPA while the All Star selection will be chosen by a panel of sports journalists and pundits. The All Stars will be revealed on Friday, November 4th at a banquet in Dublin’s Convention Centre. The winners will travel, alongside the 2015 winners, on this year’s All Stars tour to Abu Dhabi and Dubai (November 23rd-29th - with an exhibition game taking place in Abu Dhabi on November 25th).

UNDER-21 TEAM OF THE YEAR

Tipperary’s Andrew Coffey has been named on the Bord Gáis Energy under-21 hurling team of the year - the emerging Nenagh Éire Óg star has been rewarded for his outstanding displays against Limerick and Waterford in this year’s Munster championship. The team was selected by the Bord Gáis Energy Sports Ambassador Ger Cunningham, TG4 presenter Michéal Ó Domhnaill, Waterford’s Ken McGrath and Galway’s Joe Canning.

In all eight players from Waterford were named on the selection - the players will be presented with their awards at a ceremony at Dublin’s Mansion House on Saturday, October 8th. On the night the under-21 player of the year will be named - the nominations are: Austin Gleeson, Patrick Curran or Stephen Bennett. The Bord Gáis Energy Off the Ball Score of the Year will also be announced on Saturday night - Andrew Coffey’s goal against Limerick in the Munster semi-final is among the favourites to take the honours.