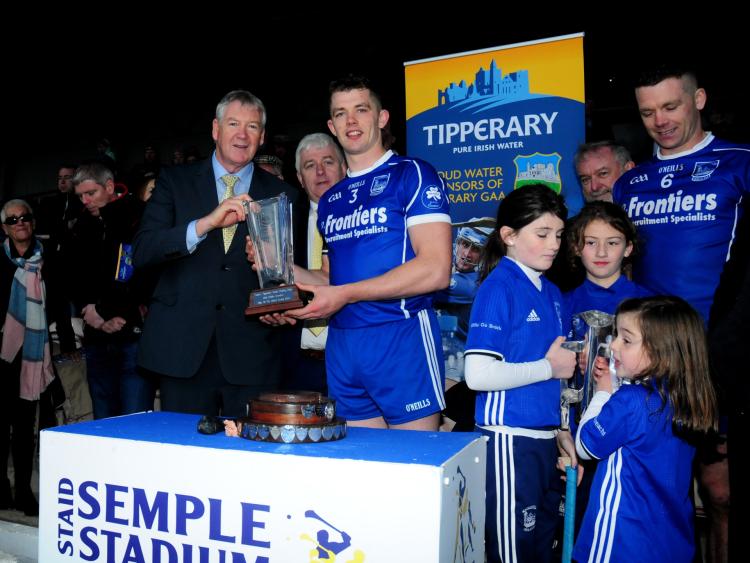 The mighty Thurles Sarsfields landed a 35th county senior hurling title at Semple Stadium, Thurles when they surged to a 0-27 to 1-15 win over Kiladangan on Sunday afternoon and thereby completed a three in-a-row.

In front of 6,546 paying spectators Sarsfields led 0-15 to 0-6 at the break. Joe Gallagher notched a cracking goal for a Kiladangan team who were appearing in their first final since 1938. Ronan Maher’s display earned the Tipperary All-Ireland winner the man of the match award.

In the curtain-raiser on Sunday St Mary’s Clonmel placed county minor A hurling titles back-to-back when earning a 2-15 to 2-11 win over a much-fancied JK Brackens Óg team.

In Mid Tipperary the division’s junior B football championship final was won by Boherlahan-Dualla - they beat Moyne-Templetuohy in the final at Drombane.

Meanwhile Burgess-Duharra collected a fifth successive county senior Camogie title at the expense of a determined Borris-Ileigh team at The Ragg Camogie Grounds on Sunday afternoon. In the replayed county final Burgess-Duharra enjoyed a 2-13 to 1-9 win.

The achievement of Cashel King Cormacs, who completed a minor B county football and hurling double at New Inn, caught the eye in frantic day of sporting action in Tipperary on Saturday. Last week at Cahir the Cashel King Cormacs football team captured the club’s first county minor title in 42 years while on Saturday the hurlers completed the magnificent double when landing the Paddy Broderick Cup - Cashel beat Skeheenarinky-Clonmel Óg 3-17 to 1-11 in the decider.

The quarter-finals of the Tipperary Water County Senior Football Championship also featured on Saturday afternoon - Loughmore-Castleiney saw off the challenge of Galtee Rovers 3-15 to 0-11 with John McGrath (two) and Brian McGrath notching goals in a devastating opening half display from the Mid champions (3-10 to 0-3). Clonmel Commercials, the defending champions, cruised into the last four thanks to 1-19 to 0-11 victory over Arravale Rovers - Michael Quinlivan featured with 0-8 in this contest while Eoin Fitzgerald helped himself to 1-3. Clonmel will be joined in the semi-finals by a Kilsheelan-Kilcash side which beat Ballyporeen 1-13 to 0-12. The last of the quarter-finals, between Moyle Rovers and Aherlow, is scheduled to take place on Wednesday next, October 19th at 8pm in New Inn. Following the semi-final draw Clonmel Commercials will take on Loughmore-Castleiney in Boherlahan and Kilsheelan-Kilcash will face Moyle Rovers or Aherlow in Cahir next Sunday.

The finalists in the Tipperary Water County Intermediate Football Championship are now known following Saturday’s semi-finals. Fethard enjoyed a three-point win over Moyne-Templetuohy 1-12 to 0-12, but required extra-time to progress. Meanwhile an impressive Golden-Kilfeacle enjoyed a 3-12 to 0-11 victory over Fr Sheehy’s at Leahy Park, Cashel - Josh Keane starred in a Golden-Kilfeacle team which will take beating in the decider.

Saturday proved to be a painful day for the Moyne-Templetuohy men - while their intermediate footballers lost a county semi-final to Fethard the club’s senior hurling side were relegated alongside Moneygall when Silvermines and Knockavilla Kickhams drew 2-17 apiece. Although Moyne-Templetuohy have one game to play in the play-off series (versus Moneygall) the result of that game is now irrelevant and the Mid men drop to the intermediate grade in time for the 2017 championship season.

The semi-finals of the Tipperary Water County Intermediate Hurling Championship also took place in Dundrum on Saturday afternoon. In the opener Newport saw off Lattin-Cullen Gaels (2-22 to 1-12) in a bad-tempered affair which stretched the patience of referee Kevin Jordan to the limit. Meanwhile a determined Seán Treacy’s asked huge questions of Thurles. Sarsfields, however, stood tall when it mattered most and saw off the West champions with three points to spare in a thriller (0-17 to 1-11). The intermediate hurling final between
Newport and Thurles Sarsfields will be played in Dundrum next Sunday at 2.30pm.

There was action in Mid Tipperary where Upperchurch-Drombane beat Gortnahoe-Glengoole 3-20 to 2-13 in the division’s junior B hurling final at The Ragg.

In rugby the quarter-finals of the Bank of Ireland Munster Senior Cup took place on Saturday. Nenagh Ormond lost out to Cork Constitution (10-57) while Cashel RFC progressed to the semi-finals when beating UCC 5-0 at the Mardyke. The prize for Cashel is a home semi-final against Young Munster.

Don’t miss all the reports in this week’s edition of the Tipperary Star.