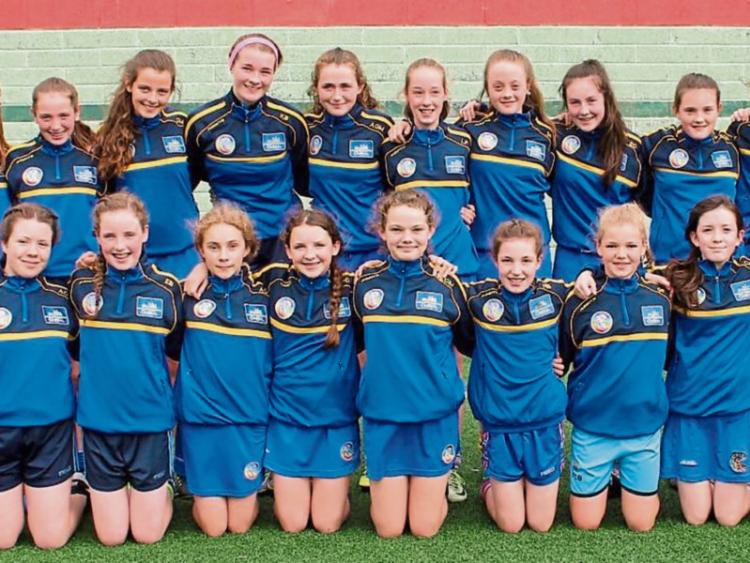 On Saturday last in Mallow our U.14 girls took part in the Feile Na Ngael Regional Finals in Mallow.

This was certainly an experience for the group taking on clubs from Clare and Dublin. Up first we played Kilkishen/Bodyke of Co Clare and what a game this was. Playing in very hot conditions and against a breeze the Clare Club enjoyed a healthy halftime lead 2-2 to 0-1. But the girls emerged full of energy and when Keeva O Donoghue sent a blistering shot to the net we came right back into it. But Bodyke soon replied adding their 3rd goal against the run of play. Cashel soon fought their way back with a goal of quality. Lily Fahie Brilliantly won possession near the end line and sent a perfect delivery across goal for Keeva to control and without catching unleashed another unstoppable shot to the net.Cashel were now in the ascendancy with Alessia Mazzola and Grace Moloney in superb Form. A brilliant point from Grace put just a goal in it as the girls threw everything into those final few minutes to salvage something from the game. Kilkishen/Bodyke certainly had some nervy goal mouth scrambles but Cashel just could not get the crucial score. Final score Cashel CC 2-2 (K O Donoghue 2-0, Grace Moloney (0-2) Kilkishen Bodyke 3-2. And so it was winner takes all against Kilmacud Crokes in game two But the girls could not match the same level as in the first game. Trailing 0-4 to 0-2 at halftime the girls conceded an early goal which knocked us flat. The girls did keep going with Karen Bennett leading the defense brilliantly but it wasn't to be and we exited in a score of Cashel CC 0-3 Kilmacud Crokes 1-6.The experience alone will stand all the girls in good stead. Both teams we played competed in A and both contested their county finals so on balance the girls can be very proud of their efforts. We hope they learn from it and we continue to improve all the time. A big thanks to our sponsors Sean O Dwyer and Donal Ryan for togging the entire panel out and we hope we can go a step further at the Community Games final in University Limerick on July 1st. Also to all the parents that helped out on the day this was greatly appreciated and finally to a fantastic bunch of girls, you were all brilliant.