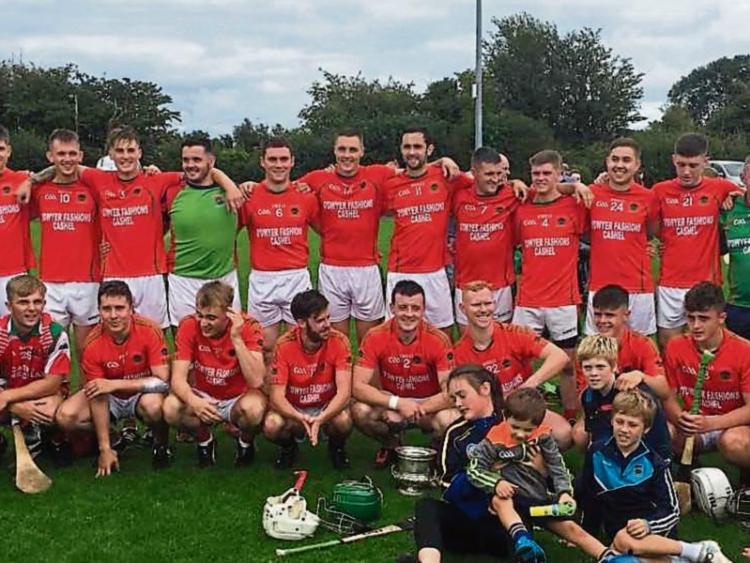 Our Junior B hurling team were in action in a refixture with Solohead in Sean Treacy Park on Saturday last. Solohead started very brightly with the Cashel goal line living a charmed life with two Solohead efforts cleared off the line.

Trailing four points to nil Cashel soon found their feet and produced some good hurling. With the scoreline 5 points to 3 in Solohead's favour, Philly Taylor scored a brilliant individual goal to put Cashel in front. With the half coming to a close Cashel were left to rue a missed penalty but still held a halftime lead 1-6 to 0-7. The second half was all Solohead as they soon restored their advantage with a goal and 3 points in a few minutes. The game was in danger of getting away from Cashel and trailing by 6, sub Adam Skeffington sent home a goal to give his team a lifeline. Solohead soon added a point and did enough to close out victory 2-14 to 2-10. Credit to Cashel as they never gave up.

On Sunday our Intermediate hurling team contested a county league final against Cappawhite in Golden. The opening exchanges were nip and tuck but a Cappa goal just before halftime handed them a 5-point advantage. Cashel struggled to reach the levels of their West championship campaign as Cappa made all the running in the second half. A second Cappawhite goal knocked the stuffing out of Cashel's effort. Conn Bonnar did manage a late Cashel goal, but it was Cappawhite's accuracy in front of goals that proved decisive winning 2-19 to 1-10. The lads now turn their focus to the upcoming county intermediate championship.

Our U16 hurling team exited the championship rather disappointingly on Saturday last. A good start was quickly eroded as Cappa Gaels scored two quick goals to take the lead just before halftime. Cashel struggled to match their opponents and though the crossbar came to Cappa's rescue in the second half they pulled away for a comfortable victory and now play Kickams in the west Final.

Well done to our Garda Cup teams on their victories over the weekend. Our U11 A Garda Cup team had wins over Golden and Clonoulty in Golden while the U11 B Garda Cup team had good wins also over Cappawhite and Arravale in Dundrum. Finally Saturday saw Leahy Park jam packed with teams from all over Tipperary and beyond for an U8 hurling blitz.

There was a feast of hurling with almost 20 teams participating. Well done to Declan and his team of mentors for all their hardwork organising and running the blitz. Also to those who brought food and looked after our visitors throughout the morning. Most importantly well done to all our visiting teams and our own three teams who took part. You were all brilliant.