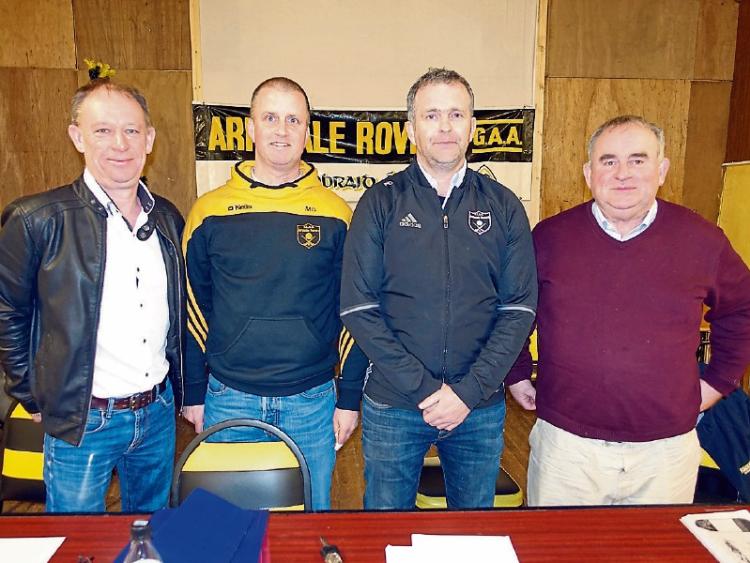 The 2018 Arravale Rovers was held last Saturday the 13th of January in Sean Treacy Park. Again it was a well attended affair with members present from all sections of the club.

Michael Lonergan in his first Secretary's report provided a comprehensive record of the club's 2017 activities. He recorded the many and varied activities over the year including successes and disappointments.

The club also lost some stalwarts during 2017 including the untimely death long serving officer Jimmy O’Connell and the loss of players through transfers and injuries. The Adult Club had mixed fortunes on the playing fields, winning the West SFC was important but County success eluded the panel. Four Divisional finals were lost but the future looked bright. Club na nÓg had a successful year winning a County Hurling title as well as seven West titles, so the promotion of games at underage level is bringing success. The Ladies Football at Adult and Juvenile Level is also progressing and the newly formed Camogie club also did well.

A detailed Treasurer's report from Sean Dalton was circulated and Sean outlined the finances required to run a large club such as Arravale Rovers. Besides the day to day running of the club, over €70,000 were spent improving facilities over the past four years, and it was planned to raise a further €20,000 to complete projects in 2018. He also outlined an ambitious fundraising programme for next year. The important message for members was that a small credit bank balance would be carried over into the New Year.

Outgoing Chairman Tadgh Duggan addressed the AGM. and made particular reference to the success of the four sections of the club, Hurling, Football, Camogie and Ladies Football working together smoothly. Tadgh thanked all who helped him during his three years as Chairman. Special mention was given to grounds man Brendan Crowe for the enormous amount of work done to prepare and keep Sean Treacy Park in good condition over the year.

The following officers were elected: Chairman; Paddy Delaney, Secretary; Michael Lonergan, Treasurer; Sean Dalton and PRO Mark Gleeson. The coach for the Intermediate Hurling Coach will be Kevin Shelly while former Cork Manager Conor Counihan will be the Senior Football Coach.Many tributes were paid on the night to legendary Arravale Rovers man Jimmy O' Connell who passed away during the year. The big fundraiser for 2018 will be the staging of Strictly Come Dancing on Friday March 9th.It was announced also that Arravale Rovers club gear is available on the O’Neill’s and Balon Sports website. This is an excellent addition to the club to ensure all club members have year round access to club gear. Eamon O’Dwyer was complimented for organising thge recent Reunion of the Arravale Rovers County Intermediate Champions of 1997 and also the of commemoration for past officers and members at St. Michaels cemetery.