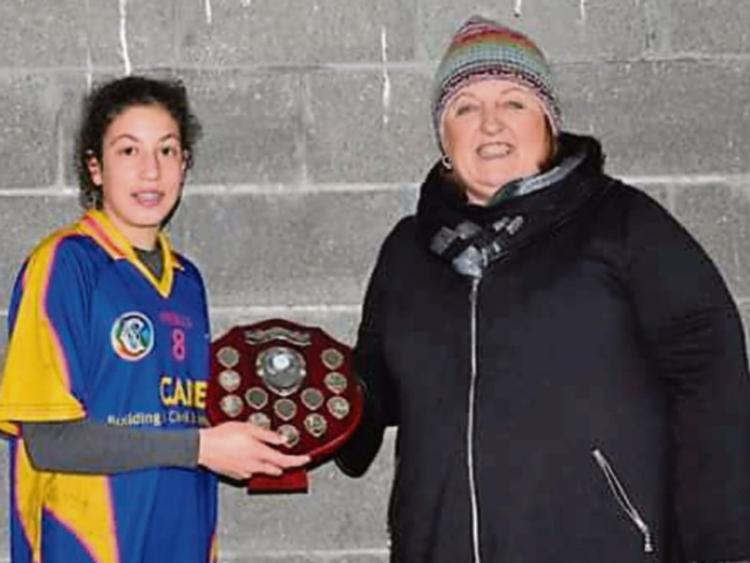 At a wet and windy Ragg on Monday week last, Cashel's U.14 Camogie team pulled out all the stops to see off Shannon Rovers and earn their spot at this years John West All Ireland Feile competition in June.

This group had to do it the hard way defeating both Knockavilla Kickams and Eire Og Annacarty along the way to the final. Aided by the elements in the opening half the girls exerted all the early pressure but only managed a goal and two points. The Cashel goal coming from Ella Shelly with points from Anna Fahie and Keeva O Donoghue. The worry was would this lead be enough with the North team playing with an increasingly strong wind in the second half.

But if anything this group of girls are determined and took the game straight at Shannon Rovers on the resumption. Keeva O Donoghue managed to squeeze home a 21 metre free and this goal handed Cashel that extra cushion we needed. The rain pelted down and the wind picked up but this didn't deter either side as they contested every ball with zest and enthusiasm.

Shannon Rovers did rally and had moments late in the game, but the Cashel girls were not to be denied. The final whistle was met with scenes of jubilation as the huge Cashel support saluted the efforts of the panel. This was a thoroughly deserved victory for Cashel. Each member of the panel has trained brilliantly and their preparation has played a key part in tho success.

Heroes each and every one of them. Captain fantastic Alessia Mazzola accepted the Feile trophy on behalf of her teammates and thanked everyone for their help and support along the way. And so its onto Clarinbridge on June 8th to contest in Division 1 of the All Ireland Feile, representing the town of Cashel and County Tipperary, an occasion we are all looking forward to.

The club would like to thank all those that have supported the team so far and urge as many to make the trip in June also. As with everything this trip will incur major expenses and we would hope some local businesses would like to help out in any way can do so by contacting Donie O Donoghue on 0861637557. Feile 2018 here we come.