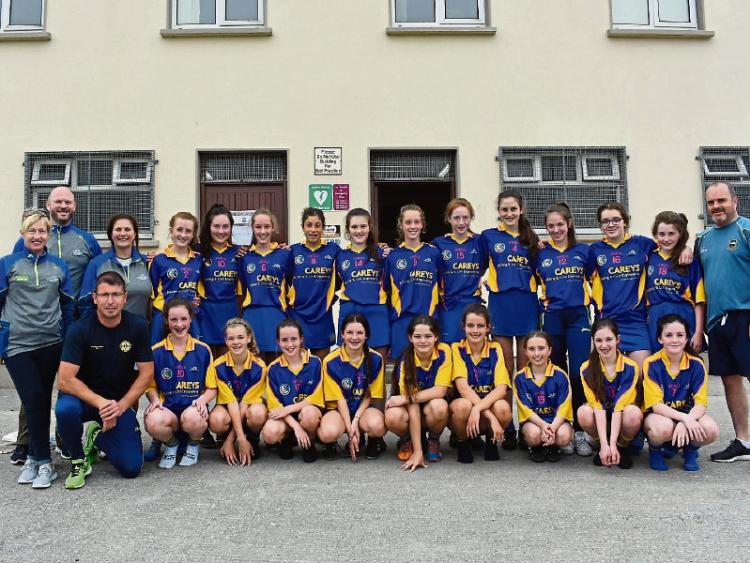 Cashels U.14 Camogie team made the trip to Clarinbridge on Friday last to compete in Division 1 of the John West Feile.

This was a step into the unknown for the entire panel and management with everyone hopeful of having a decent run in a difficult division.

First up was a clash with Craughwell (Galway) and the girls were too strong running out convincing winners 4-10 to 0-3. The talk around the pitches was that the Cashel vs St Brigids (Dublin) was being billed as the 'big clash' and so it proved to be. Cashel started brilliantly and held a five point lead at halftime. A huge crowd was treated to a very exciting game as the Dublin Champs quickly went about closing the gap, scoring a goal and a point. But the Cashel girls stood tall and had enough in the tank to close out the game winning 1-5 to 1-1. This victory raised the bar for Cashel and now had other clubs taking note.

So it was on to Saturday morning and we played our hosts Clarinbridge in game 3. After a lacklustre start the Galway team had no answers for Cashel's firepower with Cashel winning 2-7 to 0-3, securing top place in the group and setting up an intriguing All Ireland Quarter Final clash with Galway Champions Davitts, venue Castlegar GAA grounds. This game will live long in the memory of all of those in attendance as one of the best games of the competition. Cashel got off to a flyer and held a four point lead, Lily Fahie with a brilliant point and Keeva O Donoghue rifling home a goal and converting a free. But Davitts replied with a goal and a point.

Cashel however held a one point interval lead 1-2 to 1-1. The second half was played at a very fast pace. Cashel soon got back on the score bord when Grace Moloney gained possession using her speed and strength to slot home a crucial goal. But the Galway team soon goaled themselves to setup a dramatic finish.

A late Davitts point followed by a slightly controversial moment wasn't enough to undo Cashel as the shroud Shrill of the referees whistle sent Cashel players, management, parents and supporters into a raw state of delirium.

The girls had just pulled off a massive victory 2-3 to 2-2 and had now cemented their place in the All Ireland semi Final in the Connacht GAA Centre in Bekan, Co Mayo. Midfielders Grace and Alessia were always busy and full of energy while the attack of Katelyn, Erin, Anna, Grace, Keeva, Ciara, Emer, Aoife and Lily Tobin all played massive parts in this victory.

The injured Ella Shelly played her part too. After an evening of hospitality from our hosts the attention quickly turned to Kilrush Wexford on the Sunday morning. An entirely new experience for everyone involved. The opening ten minutes saw Cashel play probably their best Camogie of the Féile as favourites Kilrush struggled to cope with Cashel's high tempo and energy. Four unanswered points from Erin Gillespie, Keeva O'Donoghue, Anna Fahie (2) saw Cashel hold an encouraging lead with half time approaching. However right on the stroke of halftime Kilrush struck a blow, Evelyn Gayson brilliantly saving a shot but the rebound was finished to the net. Kilrush dominated the early part of the second half and in a flash went from being a point down into a 3 point lead. Two late frees extended their lead to 5 as a very brave Cashel had just come up short, 2-3 to 0-4. Gallant in defeat is an understatement. Each one of the panel gave it their all and no one could ask for anymore. They were absolutely superb and more than a match even better than the best clubs in Ireland.

From the minute we met at Leahy Park to head off we enjoyed every second with a group of extremely talented and brilliantly behaved girls. Yes, at half-time versus Kilrush it looked like it was certainly on, we just couldn't weather that second half early pressure. But hey not a thing lost in defeat, what a group they are and will have plenty more successes into the future. Cashel Camogie is alive and well.