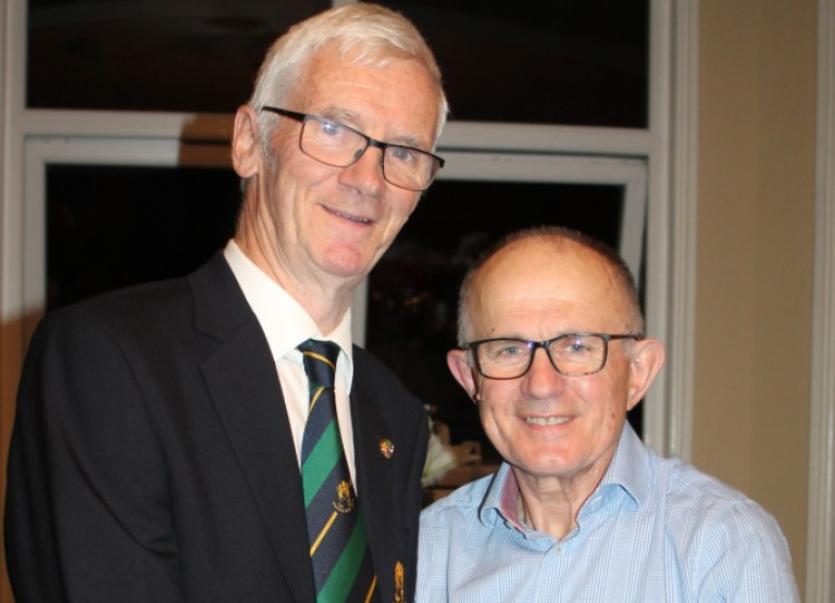 Captains Prize
John Hackett’s Captains Prize took centre stage at the weekend, played as a 36 hole stroke competition. With qualifying rounds set for Friday, July 19 any, July 20, over 200 members registered to compete for the main prize.
Unfortunately, adverse weather conditions on Friday forced the Committee to abandon play and thankfully, it was possible to facilitate all competitors on Saturday.d Saturda
With the top 39 players seeded for Sunday, play got underway early and the main qualifiers battled challenging weather conditions again before the winner was decided. Eventually, Ned Commins with a fine score of 142 declared the winner with William Maher a very worthy second.
The prize giving took place at the Clubhouse on Sunday night with a good turnout acknowledging the popularity of the Captain. The President, Terry McKenna introduced John Hackett and welcomed his family and friends to the Club. He also commented on John’s over 40 years membership of Thurles Golf Club and that his Captains day will always be remembered for the fact it coincided with Shane Lowry winning the British Open at Royal Portrush.
John Hackett thanked everyone associated with making his weekend a great success. He heaped praise on all committee members, course and office staff, bar staff, members who played, those who set up the prize display, those who prepared for and attended his reception and complimented all those who won prizes in the various categories. He presented his main prize to Ned Commins who responded by acknowledging the excellent contribution John has made to the Club.
The Captain then presented a prize to the Lady Captain, Alice which the ladies will play for on Tuesday next. John thanked Alice and the lady members in the Club for their support and acknowledged the good working relationship between both Clubs. Alice responded, complimented John on his day and expressed best wishes to him for the future
Finally, John thanked his family members and spoke movingly about his current situation and the challenges ahead. The MC, Vice Captain Enda Bourke wished John, on behalf of all members of Thurles Golf Club, good wishes for the weeks and months ahead and a recovery to full health and looked forward to having him back on the fairways before the end of the year.
John Hacketts Captains Prize Results:
1st Ned Commins (17) 142
2nd William Maher (13) 136
3rd Chris Delahunt (22) 142
Gross Kieran Kennedy (+1) 147(Gross)
4th Liam Cleary (12) 143
5th Eamon Hayes (10) 143
6th Joe Irwin (15) 143
7th Michael Cleary (17) 144
8th John Dwan (15) 144
9th James Smyth (10) 144
10th Denis Cleary (14) 145
Gross 1st 18 Paul Byrne (Jnr) (2) 74
1st Nett 1st 18 Tom Quinlan (23) 68
2nd Nett 1st 18 David Crowley (7) 71
Gross 2nd 18 Edward Maher (5) 74
1st Nett 2nd 18 Dessie Taylor (17) 70
2nd Nett 2nd 18 Pat O’Connell (14) 72
Past Captain James JF Phelan (14) 145
Veteran Tom Commins (25) 147
Juv/Student John Brett (10) 69.