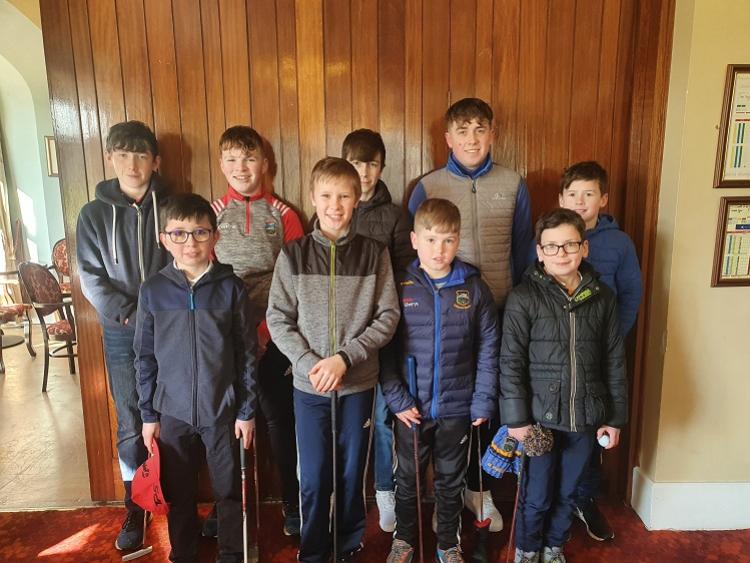 CAPTAINS / PRESIDENT DRIVE-IN
The annual drive-in by the Captains and President took place at the weekend. Unfortunately, the mixed team competition scheduled for the morning had to be deferred due to heavy overnight rain.
The Captains and President were piped from the clubhouse to the 10th tee by Michael Flanagan who has performed this traditional role for many years.
First to hit was Junior Captain, Oisin O’Brien, followed by Lady Captain, Anne O’Grady, Men’s Captain, Enda Bourke and President, John Stakelum. We are glad to report each of them hit fine drives up the 10th fairway! Every drive was cheered by a good turnout of members, well-wishers and families.
The drive-in was followed by speeches from each of the Captains and President while all present enjoyed a relaxing afternoon in the clubhouse afterwards.

JUNIOR GOLF
On Thursday last we had the first meeting of what we hope will be many more when some of our Juniors met with the Captain Enda, President John and Liam Troy from Munster Golf. They were introduced to this year’s Junior Captain Oisin O'Brien and had some discussion about Club rules and etiquette. This was facilitated by members of our newly formed Junior Committee and was followed by food and some putting tips from Liam. Unfortunately the weather wasn’t conducive to playing golf but with the Fred Daly just around the corner we will meet again in early March.
On Sunday Oisin led the March to the first tee by piper Michael Flanagan and he proved that the juniors are a force to be reckoned with by hitting a missile up the 10th in front of a huge crowd gathered for the Captains Drive.

ANNUAL SUBSCRIPTIONS 2020
Annual Subscriptions are now due for payment. Anyone wishing to sign up for Direct Debit for the first time must complete a Mandate form in the office. Any members paying by direct debit can call in to Ashling in the office to collect your 2020 membership sticker.

REPAIRING DIVOTS / PITCH MARKS
Can members please ensure they collect sand bags before start their round and also repair pitch marks on the greens which are in great condition at the moment. Thank you.

TOP TWENTY WINTER OPEN TEAM OF 3 QUALIFIER
Our hugely popular 14 Hole Open Team of Three S/F (Any Combination) returned on Sunday, November 3. Play any day of the week and Sunday after competition. Entry fee per person – members €5; visitors €15. Grand Final will take place on Saturday, April 4, 2020. Further information and current leader board are posted in the Clubhouse.

SPRING LEAGUE
Round One of the Spring League has been extended to Saturday, March 7 due to the poor weather conditions last week. Team A play Team B (Team A top of draw) and Team C play Team D (Team C top of draw). All matches must be played on the 1st nine holes in play. After each match is completed please forward the result to your team captain. Best of luck to all players.