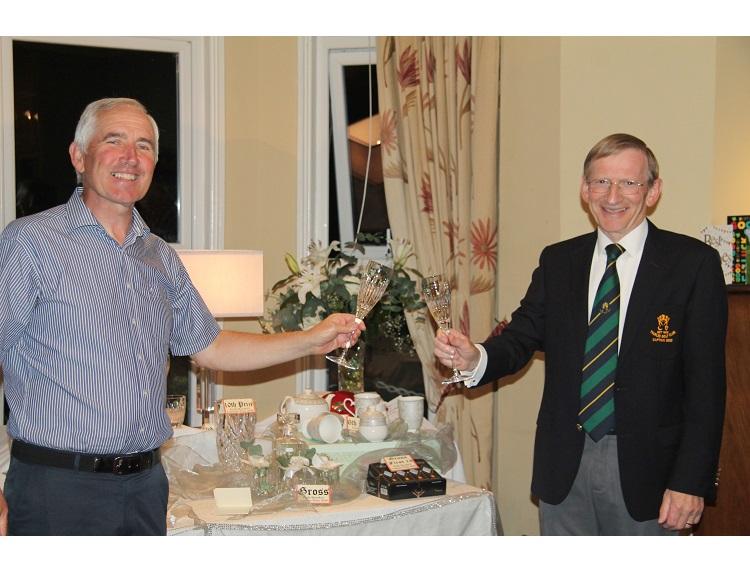 Pat Coote won Enda Bourke’s Captains Prize at the weekend in fine style. Playing off 14, he shot rounds of net 62 and 66 for a combined score of 128, winning by 5 shots from second placed Brian Lanphier. Pat was accompanied by his family as he collected his first prize at the Club on Sunday evening.
Almost 300 members played in the competition which started in challenging weather conditions ,with qualifying on Friday and Saturday but ended in glorious sunshine on Sunday with a number of excellent scores returned and the usual, if only hard luck stories by others.
The final day started with a reception for the Captain and his family. Club member and Captain of the Tipperary hurling team, Seamus Callanan paid a visit to the Club in the morning with the Liam McCarthy cup and Enda made a presentation to Seamus on behalf of the Club to acknowledge his achievements in 2019.
Due to GUI guidelines prize winners were advised to call back to the Club on Sunday evening for collection of their prizes once the results were announced. Vice-Captain Billy Clancy invited Club President, John Stakelum to introduce the Captain. John thanked Enda for his contribution to Thurles Golf Club both as volunteer and officer in a number of roles and also spoke about his voluntary work as President and founder member of Thurles Special Olympics Club. He commented on Enda’s sporting career and achievements in both Mens hockey and golf and complimented Enda and the Mens Committee on their work for the Club in 2020.
Enda thanked John Hackett for nominating him for the role of Captain and thanked all members who had supported him and contributed to the Club during his 5 years on Governing Body in various roles. He highlighted his satisfaction with the increase in memberships and the BRS booking system that is working well and vital it is retained for the foreseeable.
He thanked all the Committees he has worked with and wished the Lady Captain, Anne O’Grady well for the remainder of 2020. He complemented the course workers on the great job they do to keep the course in excellent shape and spoke highly of the admin staff especially Ashling who has been his right hand person since he was first elected to Committee 2016.
Enda paid special tribute to the course volunteer members and the work they continue to do on behalf of members. He also thanked Eamon O’Gorman and the catering staff and highlighted the Club professional Raymond, mentioning that Ray will be hosting induction courses for the new members shortly.
Finally, Enda thanked all associated with making the Captain’s weekend special – Susan and Dot for setting up the presentation table, Jim Finn for his presence all day on Sunday, for all the cards, gifts and good wishes he received and John Malone, Billy Clancy, Ashling and all the Mens Committee and support members who organised and ran the weekend competition.
Enda finished by complementing and thanking all those who took part in his prize and congratulated all the winners especially the overall winner, Pat Coote.

Other Golf news from Thurles