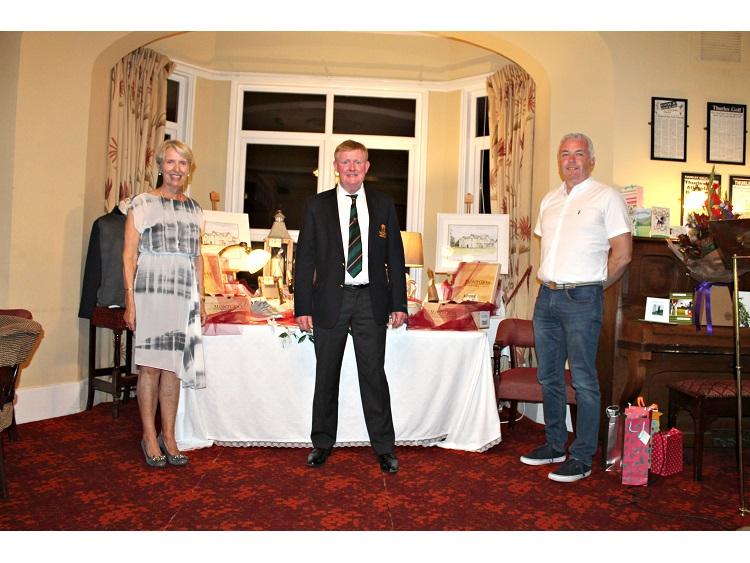 MR. JOHN STAKELUM’S PRESIDENTS PRIZE
The Club hosted Mr John Stakelum’s Presidents Prize at the weekend with a large turnout of golfers and played in excellent weather conditions. The Men’s prize was won by Fergus O’Brien with a score of 41 points who had a better back 9 than Gerry O’Dwyer who also finished on 41 points. The Ladies prize was won by Anne Hackett with a score of 38 points with Lil Leahy second on 37 points.
Due to Covid restrictions the winners were asked to collect their prizes at the Club early on Sunday evening with Tomas Ryan, Vice President coordinating affairs. He called on the Captain, Enda Bourke to introduce the President.
Enda welcomed John, Breda, Laura and Aisling and members of the Stakelum family to the Club. He paid tribute to John and spoke about the Stakelums long established business in Thurles, the strong connection with hurling and John’s own All Ireland medals won for racquetball and golf. He complimented John on the wonderful array of prizes and thanked John for his contribution and commitment to Thurles Golf Club and particularly this year with all its challenges and changes.
President John then spoke and thanked his Governing Body colleagues, Enda and the Men’s Committee and Anne O’Grady and the Ladies Committee for their support throughout the year. He thanked the course workers for keeping the course in excellent condition, spoke highly of Ashling in the office and Club Pro, Ray, the bar and restaurant staff, Susan and Dot for helping with setting up the prizes table and the on-going work of the member volunteers who have contributed hugely to the Club in recent years.
John also highlighted the increase in younger golfers this year and the new energy they bring to the Club. His ambition is to see these members get involved at Committee in the near future and ensure they have a say in the running of the Club.
Finally, John thanked his own family for their support and complimented all the prize winners which are listed in full in this report.
John Stakelum’s President’s Prize (Men) - 18 Hole Singles S/F: G.O.Y.
1st Fergus O’Brien (12) 41pts (18 back 9). 2nd Gerry O’Dwyer (16) 41pts (17 back 9). 3rd Jamie McCormack, Under 40 category (15) 44pts. Gross Kieran Kennedy (0) 38. 5th Liam O’Dwyer (15) 40pts (13 back 6). 6th Donal Kinnane (14) 40pts (12 back 6). 7th Thomas Fogarty (5) 39pts. 8th Gerard Maguire (12) 38pts (22 back 9). Past President Jim Phelan (18) 36pts. Juv/Student Fred Crowley (18) 39pts. C.S.S. Saturday 36pts; Sunday 35pts.