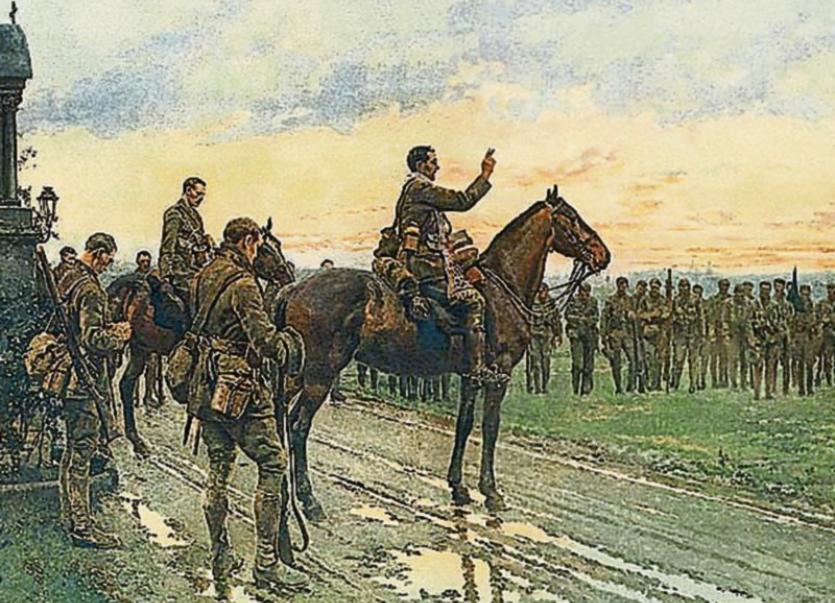 In 2014, I learned the citizens of Ireland were planning to celebrate the service of its veterans of World War I during 2015.

Specifically, honor and respect would be shown to those veterans who had loyally served in the Irish Military Forces, having served as participants in the various Irish regiments assigned to the British forces. These efforts were to be highlighted and acknowledged for their heroic deeds. Initially, one of the days set aside for the celebration was targeted for May 8, 2015.

Many of these Irish soldiers were KIA (killed in action) or wounded as they bravely and gallantly served. However, many of those who returned had been less than honorably treated for this service by the local citizenry.

I am proud to note here that my Uncle Frank, Chaplain Francis A. Gleeson, served with those forces during that time. I understand that over the years he has become a rather well known and admired Irish military figure.

The May 8th happening marked the one-hundredth anniversary of an historic and costly battle, as well as the anniversary of the Fortunina Matania painting of Chaplain Gleeson administering Absolution to the troops on the eve of battle. In essence, his service was the driving motivation for these celebrations.

In this narrative I trace the journey of myself and a group of 23 American nieces, nephews and their families through this exciting and happy passage.

The service at Glasnevin Cemetery was very well planned and thought through in every detail. The Europeans have had much practice in these kinds of celebrations and they carry them off in grand fashion.

To further set the tone for the day I will insert here a short piece that will help provide an awareness about the subject at hand. This is a preamble that Paddy Gleeson, Senior Tour-leader, had prepared and uses during his monologue in conducting tours at the Cemetery:

Father Francis A. Gleeson, Templemore, County Tipperary. (1884 - 1959). Fr. Francis Gleeson was a Military Chaplain to the 2nd Battalion of the Royal Munster Fusiliers in the First World War. He is one of my favorite people for the reasons briefly touched upon below.

A Man of Action: Jovial Fr. Gleeson of the Munsters, when all the officers were killed or wounded at the first battle of Ypres, had stripped off his black (Chaplain’s) badges and, taking command of the survivors, (he) held the line. (Robert Graves’ 1929 Book, Goodbye to All That.)

A Terrible Day: On Saturday 8 May, 1915, the Munsters halted at a wayside shrine near Rue de Bois. Fr. Gleeson, on horseback, facing A Company and wearing his stole, gave them a General Absolution. The war illustrator Fortunina Matania later captured the scene in a famous painting.

A Terrible Night: Fr. Gleeson, who was aged 30 at that time, comforted those he could and administered the Last Rights. He described the scene as follows in his war diary.

Spent all night trying to console, aid and remove the wounded. It was ghastly to see them in cold cheerless outhouses, on bare stretchers, with no blanket to cover their freezing limbs. I shall never forget that young officer with the shattered left arm, nor poor Borrowdale of the Welsh who was a great organist and who played for me in Essars. Heartbreaking to see him dying there - wasting away. Hundreds lying out there in cold air all night at Windy Corner. No ambulances coming. They came at last at daylight.”

I’ve stood many times at Fr. Gleeson’s grave in Glasnevin Cemetery, sometimes with nephew Paul Gleason from Pennsylvania and members of his family. Sometimes I’ve started to recite the particularly extract cited above, but I’ve never managed to finish it. Standing at his grave, the words from his war diary are simply too much.

Fr. Francis Gleeson - A brave priest and soldier. - May he rest in peace.

Initially, we all gathered at the foot of the Cross of Sacrifice where the ceremonial wreaths would be placed. In attendance was a uniformed Honor Guard, the Pipers & Drum Corps, riflemen, even a chaplain in uniform on a horse representing Chaplain Gleeson. All very impressive.

The entire procedure was carried out with little or no cooperation from the weather gods. All of the speakers, wreath laying ceremonials, musical renditions and other specific functions went on precisely as planned. All flawlessly carried out.

At the close of the main ceremony at Cross of Sacrifice, myself, as the oldest and closest relative, and my niece Amy Gleason Marchisio, as the youngest, placed a wreath at his grave, followed by my leading the group in a recital of the Lord’s Prayer. At the conclusion of the prayer, the formal procedure for the occasion was being brought to an official close.

With a sigh of relief, all umbrellas were shut down and all the attendees cheerfully retreated to the dry and warm interior of the museum to enjoy the Cemetery’s hospitality.

I will note at this point that, in my most humble opinion, this part of the trip, initially announced to be the “main event” and “reason to be” for the entire planned trip, went off flawlessly. The performance by each and every participant and the wholehearted acceptance of the entire proceeding by all present could not leave more to be desired.

An added feature was a scheduled presentation by archivist Noelle Dowling of the Dublin Diocese. During the last year, there has been an electronic rendering of the complete works of Chaplain Gleeson’s diaries released to the public. Ms. Dowling was kind enough to promise to send to me a full copy of those works, which I have since received. It was a most generous gesture on her part.

This extensive family trip had initially been built primarily around this very special Gleason family event. All had gone so well, and we were all contented, extremely excited and happy at the glorious outcome of the entire celebration. The word “perfection” enters my mind. We all sat together in the City of Dublin amid the contented smiles of those who had taken on a pleasant assignment and carried it through to its joyous conclusion. Here’s to all of us.

The Town of Templemore Celebration

Upon the completion of the ceremonies at The Glasnevin Cemetery, this happy and completely satisfied family group proceeded on Saturday morn from Dublin to gather again in the Town of Templemore. We gathered for some family touring of the “ole home town” and, of course, the other Chaplain Gleeson ceremonial to take place here on Sunday, May 10th. This was to be a completely separate celebration by a different military and civilian group to honor Chaplain Gleeson in his home town of Templemore.

The day had an auspicious beginning with Sunday morning mass in the Sacred Heart Church where Chaplain Gleeson was ordained so those many years ago. The good father saying the mass alluded to our family party in the congregation and mentioned the afternoon celebration honoring our relative in the town square. A few nice added touches.

After the mass the group gathered with some of the Town Fathers to discuss what, if anything, were we to contribute to the day’s festivities. It was at this time that your humble writer was to find out that I, as the oldest and closest relative to the honorary, was to be the Guest of Honor and participant in the ceremony itself. I was to place the celebratory wreath at the monument during the proceedings and was even asked to voice a few words to the crowd during the culmination of the service.

The Town celebration was to commence at 2 pm. The entire presentation proceeded in splendid fashion. When called on to deliver my message, I believe I alluded to our Gleason family’s presence among the attendees for the occasion, as well as our town’s family connection with the subject and others. I was delighted to be the one chosen to perform the special and singular honor of laying the wreath at the recently erected town monument honoring my uncle and the Munster Fusiliers.

It was wonderful and everything went so well, better than any of us could have possibly wished for. The assembled dignitaries, the size and number of attendees, in spite of the weather, the other talks, the military attendees, the pipers and drummers, the music… All blended together to form this magnificent tribute to a town son.

There were so many deserving of praise who made this occasion come together. Those running the program were Martin “Gary” O’Shea and Sgt. John Reynolds of the Sister Aine (Templemore) Historical Society, who joined together in their efforts. I also wish to add a special thanks to Ronan Loughnane of the Sister Aine Historical Society, as well as former mayor Martin Fogarty and my close friend Paddy Gleeson. My Irish cousin John Gleeson defending me from the onslaught of torrents of rain with his giant umbrella. Thank you, John. If I have failed to pay tribute to anyone that I should have, let me assure you they are in my heart.

In spite of the inclement weather, the tribute came off so smoothly and effortlessly. In addition to all of the other aspects, I was delighted as the guest of honor to have been presented with a magnificent and beautifully decorated Memorial memento for the occasion. I was truly stunned by the detail, scope and beauty of the gift. It currently occupies a place of honor in my home in America.

At the end of the outdoor festivities, Gary O’Shea invited all of those in attendance to a midday feast at a dry location―inside Sacred Heart Church.

Amid much chatter and discussion, it was unanimously noted by one and all―cited, affirmed, recognized, concluded, acknowledged, certified, assured and agreed―that the entire American Gleason/Irish Gleeson Expedition had been a wonderful and total success in every manner, shape and form. We were all exhausted, but enthused in the largest meaning of those words.

As many of the readers of my exploits know, I have been to Ireland innumerable times. Each and every trip has been a most pleasant, joyous and a magical experience for me. That is why I so enjoy writing about them. I do not grade them in any way, as each one has left me with a feeling of wonderment and peace of mind. However, I must note that this particular jaunt certainly elevates and completely fills my memory bank to overflowing.

In some strange and magical way this writer has found in the land and soil of Ireland what has become in his mind and heart “my home away from home.”