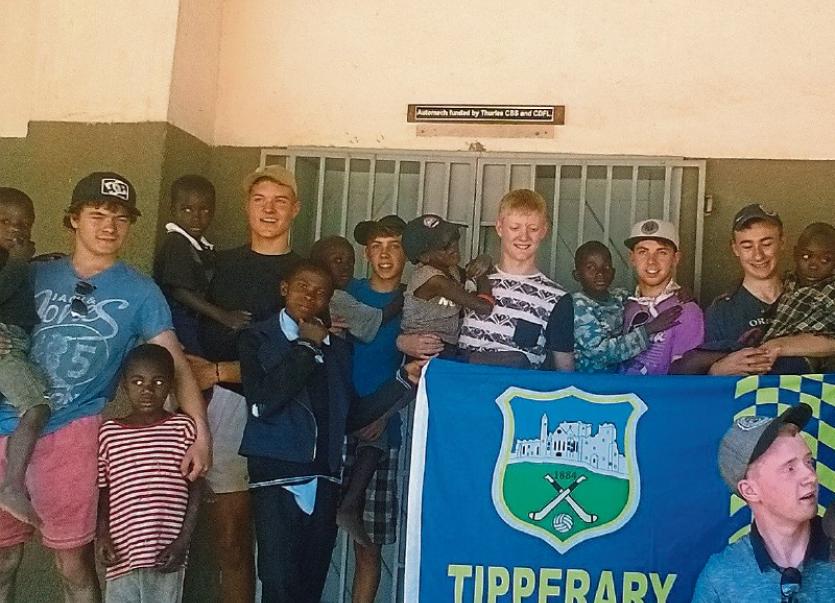 Thurles CBS has, for thirteen years, been supporting the Zambian Immersion Project, with six different groups having travelled to Mufilira to link up with former Principal Br Mick O'Donoghue.

The Immersion Project has been a hugely successful one and has helped to raise the awareness and profile of the work that the Christian Brothers are doing in Zambia.

It has also helped to raise funds for the Christian Brothers who work in Mufulira and to help improve the lives of the Zambian people - the latest group of eight students and three teachers brought 22,000 Euro with them, the proceeds of months of fundraising in the parishes of Tipperary. They immersed themselves in the Zambian culture and gained a better understanding of the problems in the developing world during their trip and have confessed to being profoundly affected by the experience.

Among the programes run by the Christian Brothers are:

The Tipperary Plots Agricultural Project - a 70 acre fertile farmland which was converted from scrub. It gets its name from the generous donations from Thurles CBS over the last number of years. Maize is grown during the rainy season and vegetables are grown under irrigation during the dry season. The maize is then used to provide porridge daily for all the trainees and the remainder is sent to the Feeding Programme. This programme sees the Christian Brothers help feed a total of 200 poor families in Murundu and Mufulira. These families get basic supply’s such as beans, salt, sugar, mealie meal, cooking oil and a bar of soap. There is a special programme for children under five who are not thriving. Here they are fed and obtain good healthy diets.

The Murundu Development Centre is a training centre for those that have left school early. It is situated in Murundu, a poor rural village with a population of over 12,000 people. Pupils are trained in metalwork, motor mechanics and building. It has over 100 students.

The Wash Programme is a Water, Sanitation and Hygiene Programme for nine schools in the Mufulira area. Hand pumps and electrical pumps, showers, new toilets and drinking water are provided through this much needed programme with some 9,000 beneficiaries. Clinics also benefit hugely.

The construction of 45 small houses (2 rooms) near Murundu village has been completed for the elderly. There are also beds, lockers, outside toilets, showers and a meeting room available. Water supply has been installed with electricity for the houses expected shortly

Three new houses have also been built for the medical staff with a small delivery room for the maternity section. Shelter for people waiting treatment is also included and this is the only medical facility to care for the local population with many sick and elderly people and young children and mothers.

The are two houses and six bed-sit apartments providing accommodation for eight teachers. Toilets and solar facilities are also available in this remote region. At present there are 370 students in the Chibolya Community School and the Brothers provide books and stationary, and help pay teachers and provide basic toilet facilities for the school.

Due to the Ebola crisis, the 2015 trip had to be delayed until October. Each of the eleven in the travelling party received seven different vaccinations prior to the trip, but still managed to pick up some tummy upsets along the way. For the eight lads it was a major deal to be away from home on their own for such a long time, but they were able to Skype their families thanks to Br Micks help.

Darragh Byrne and Willie Creedon, both from Thurles, and Diarmaid Meagher from Castleiney were on hand with teacher Ollie Kelly to outline their work and what they witnessed when they travelled to Mufilira via Dublin, Dubai and Lusaka, before an eight hour bus journey to be greeted by Br Mick. They were accompanied by James Hammersley from Clonoulty, Fionn McCartan, Alex Murphy and Daniel Matthews from Holycross, Eugene Ryan from Rossmore, and teachers Caroline Ahearne and Theresa Hogan, on the ten day trip which opened their eyes and their minds to a very different world.

These lads had been chosen following the writing of an essay, an interview and then fundraising initiatives, which were supported and undertaken by all the other applicants also. And, since their return they have been working hard to spreading the message to the rest of their peers, their parents, family members etc. People have been very anxious to talk to them about their experiences and the lads are only too delighted to oblige.

Describing Zambia as 'a very beautiful country' Willie Creedon points to the fantastic work undertaken by the Christian Brothers is helping the very many who need help. "They all know Br Mick and they deeply appreciate his work. For us to see what he does and how far our fundraising goes, was a real eye opener. You would have total respect for them all," Willie said.

Darragh Byrne speaks of setting off on a walk with school children in Murundi - about 15-20 in the group. By the time they had reached their destination they had upwards of 100 following 'the white men', all walking barefeet and in great spirits. "One little lad picked up a massive shard of glass in the sole of his foot and was bleeding profusely. His older brother just pulled it out and rubbed his foot in the clay before the set off again. They are seriously tough - if it had happened to us back home, we'd be in A&E for stitches and on crutches," he says.

Diarmaid Meagher is determined to tell everyone of the experience as best he can. "It's very hard to put into words. We have all seen the photos and heard the stories, but until you are there and see it four yourself, it's very hard to understand. They have very little but they are very appreciative of anything you give them. The kids play soccer with a ball made of string and rags - we gave them new footballs and they were so overjoyed. It was very special to see the reaction. You would just love to have been able to give them more. We had been told not to give money because you could very easily be overrun with people - it was heartbreaking to be turning a blind eye to small children who have nothing, especially when we had phones in our pockets worth a few hundred Euro. It didn't seem right," he said.

Of course, by telling their story, the lads are spreading the message of the good work of the Christian Brothers - long may they continue to make a difference to the lives of very many in Zambia, as they did for many generations, here at home in their own country.