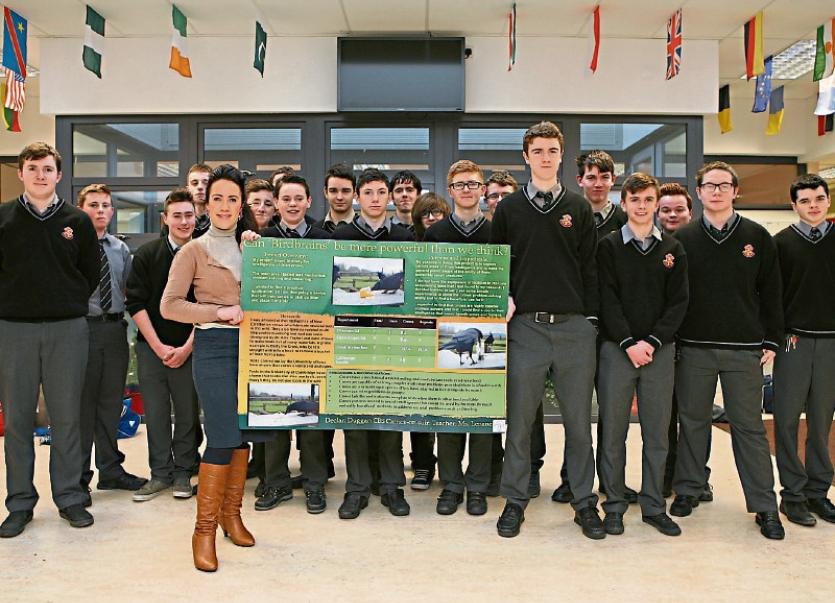 Sixteen year-old Declan Duggan's project "Can Bird Brains Be More Powerful Than We Think" earned the rosette in the Intermediate Biological and Ecological Category of the science competition that ran at the RDS from January 6 to 9.

The Transition Year student from Owning near Carrick-on-Suir said his project centred on four experiements he carried out on crows that gather at this home every day when his mother feeds the family's chickens.

The experiments, carried out between late October and early December last year, tested the crows' ability to get access to food in a variety of containers ranging from a plastic tub and hinged boxes to a bucket placed in a tube. Three of the experiements worked for Declan and proved to him that crows can problem solve and they usually do so in groups.

Declan, who is son of Marie and Robert Duggan, said this was his first time to take part in the Young Scientists Exhibition and he found it a great experience.

"I met loads of people and it was great talking to the public about my project and experiencing the whole social side of it. Even writing up the project was a great experience," he told The Nationalist.

He plans to build on the research he did by conducting further experiments next summer with the aim of designing a device to train crows to pick up litter and put it in a bin and also to train them to pick up coins. If his research goes well, he hopes to enter the Young Scientist Exhibition again next January.