'People of the Year' Awards 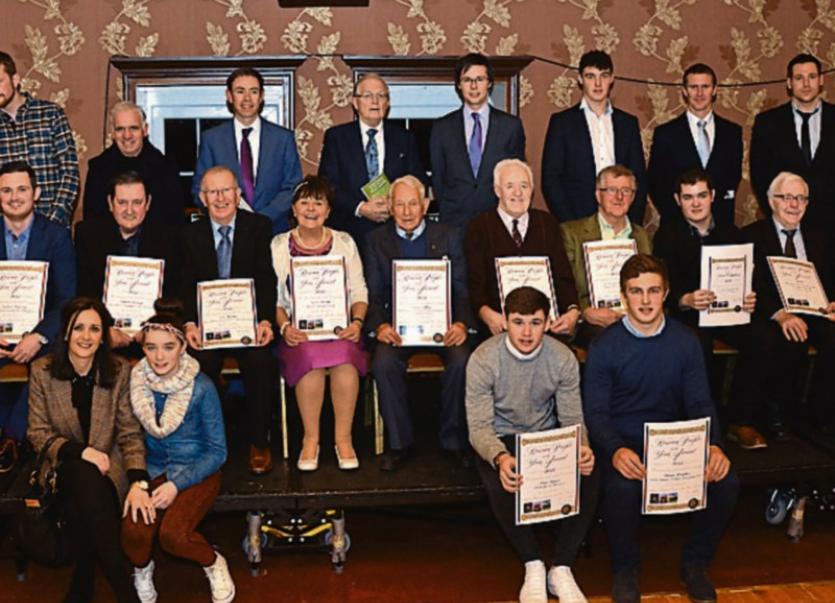 A 24-page booklet, edited by George and Carmel Cunningham, was printed especially for the occasion with short bios of the recipients of the People of the Year Awards and other relevant material.

This was freely distributed to all who attended following a voluntary donation in aid of RP book projects. Due acknowledgement was given within to the main sponsor Bernies SuperValu and the associate sponsors, Roscrea Heritage Society, Rocktop Asset Management Company and Roscrea Credit Union. The event was held in association with Racket Hall Country House.

This unique celebration of all that is good in Roscrea life and living was warmly and enthusiastically supported by a very large crowd who delighted in the very full programme of music by junior CCÉ and two all-Ireland winners, Darragh Carey Kennedy and Michael Ryan of CCÉ Ros Cré, and the illustrated presentation on Roscrea 2015 by George Cunningham which commenced the proceedings.

Over 700 new books were then presented to various recipients. A pilot project of placing new books in housing estates to encourage children to leave down the edevice and take up a book was started with representatives from Gleann Glas and Kennedy Park/Brophy Tce/Cois Carraig.

Unfortunately there was no representative of the Public Library could be present to accept the formal presentation of books from Rev. Shannon deLaureal. This heritage collection in the Public Library now holds just under 4000 volumes, not counting the 2015 donations.

Acting as MC, George Cunningham introduced each of the recipients. Main sponsor Brian Colclough presented each with their Certs (beautifully printed in Walsh printers and mounted by Redmond Photographers). Each recipient also received a SuperValu voucher or boxes of relevant books. For example to celebrate and commemorate CCR’s great sporting year some 75 new sporting books were presented to the CCR Library.

Each recipient responded warmly to their award. A light supper from the hotel ended what was a special night full of love and care as the good will was so palpable throughout the entire proceedings.

Next year sees the 30th anniversary of these Roscrea Awards and the organisers hope to make the night a very special occasion. So far, over 55,000 new books have been presented by Roscrea People through monies generated by the annual magazine and the voluntary donation at the RPYA.