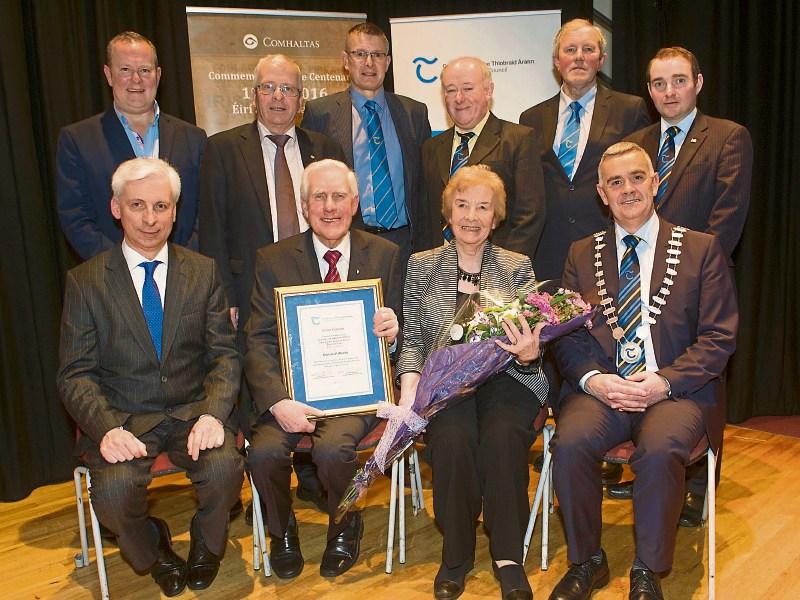 Tipperary Co. Council accorded its highest honour to Senator Labhrás O'Murchú on Thursday evening, a full Civic Reception for the man described as an 'iconic person'.

This is only the third time that Tipperary Co. Council has granted a Civic Reception since its North-South merger in 2014, and the first time for an individual instead of a group.

Cathaoirleach of the Council Seamus Hanafin proposed the motion, seconded by Cllr John Fahey. Cllr Hanafin said a Civic Reception is not lightly awarded. “They are only given to people of signifcant merit, and signicant achievement.”

Cllr Roger Kennedy praised Senator O'Murchú as one of Ireland's “great orators,” while Cllr Michael Fitzgerald Kennedy said the organisation of Comhaltas Ceoltóirí Eireann and Senator O'Murchú are so inextricably linked “that it would be difficult to separate them in the eyes of the general public.” After the foundation of the state, Irish traditional music was in decline and in danger of extinction. That all changed in 1951: “the preservation of Irish traditional music had begun, and 65 years on the music is thriving across the whole country.” Cllr Fiona Bonfield, Cllr Seamie Morris, Cllr Tom Wood, and Deputy Mattie McGrath all paid tribute to the man described as an “iconic person and fantastic republican”.

In his acceptance speech, Senator O'Murchú touched on the themes of love of county and pride of place. “Democracy is very fragile. And there are always others who will not put themselves forwards for election. We do need now in our society is to realise there are huge challenges. I think of the parents and the hundreds of thousands who have emigrated in recent years throughout the world.”

Senator O'Murchú urged others to support Irish business and industry. “Why should a nation like ours, steeped in civilisation, steeped in antiquity probably more than any nation in the world, why should we settle for the baubles at the end of the day?”

The Senator and his wife Una were gifted a bespoke handcrafted wooden lampshade carved in the shape of a stringed instrument by a local craftsman from Templemore.