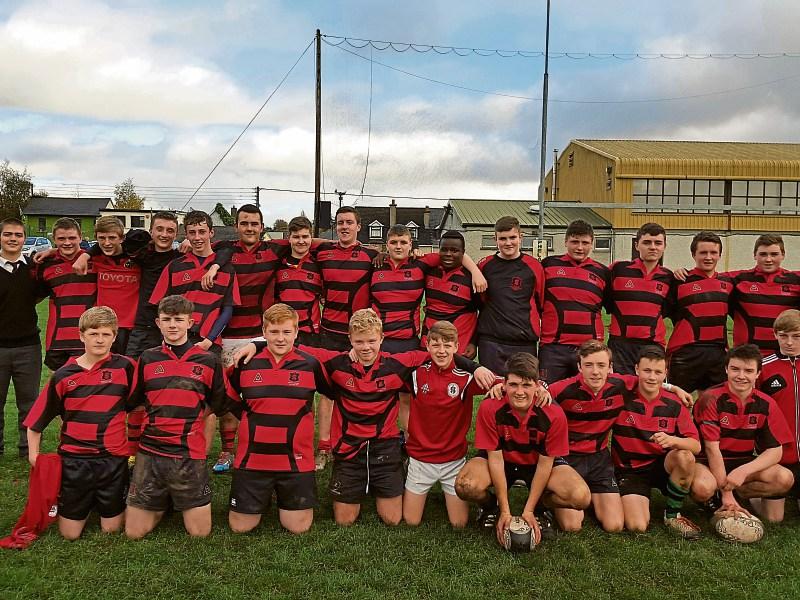 High School Clonmel captured their first Under 15 all Munster McCarthy Cup in emphatic style with a convincing 49-0 win over Colaiste Chiarain Croom of Limerick at UL's all-weather pitch.

Both schools had travelled the province wide on route to this final with the High School beating Scariff Community College Co. Clare and Ballincollig CS Cork in the quarter and semifinals respectively.

High School kicked off with the favouring wind in their backs and fly half Josh Power went long to gain every advantage in the opening minutes. A period of sustained High School pressure five metres from the Croom try line reaped rewards when captain Cian Walsh broke from a central ruck and barged through the defenders to ground just right of the posts for an early lead. Power couldn't convert and the gusting winds would prove a torment for both kickers in open play and from set pieces all day.

The restart saw a similar period of High School pressure. Hooker Enda Dunphy made massive ground on a breakaway run through the middle before being tackled metres short of the line.

The resulting ruck saw Eddie Macintosh pick possession and bulldoze over for the game's second try under the posts and Power enjoyed the easier placed kick.

Croom had a battering ram of their own and the direct line running of captain James Tomkins at No.8 was a constant threat from scrums. On three separate occasions it took last gasp tackling from Jack O’Loughlin, Macintosh and full back Aaron Kinsella to prevent certain tries.

However with the prevailing wind behind them and confidence soaring from the opening success the High School made hay. Second rows Sheehan and Lonergan and wing forward Phelan ensured healthy possession at the break down for Maguigan at scrumhalf who began to take control, putting Shane Fitzgibbon and Billy Murphy in for a try each before the break.

Even with a seemingly unassailable 27-0 lead at halftime, the game was far from over in many minds as the wind gauge now favoured Croom. But following the restart Croom continued to get very little change back from the breakdown and Macintosh's power in possession was wreaking havoc in their defensive line.

Tries from Walsh and Power early in the second half really killed off the contest with Power converting his own score with a gigantic kick into the wind from the touch line.

High School emptied the bench in the last quarter and Croom enjoyed a rare spell of possession in the Clonmel half, but two breakaway tries from lightning winger Fitzgibbon polished off an utterly dominated hour of rugby and the game finished 49-0.

Bandon Grammar, a recently established ‘A’ school in rugby, are the last name on the McCarthy cup and the Clonmel side's dominance in last week's final is testament to the strides that the school are making in the sport. The Under 15s now embark on the road to defending last year's Cleary Cup success, while the 16s are in the quarter final of the King Cup on February 23 against Killaloe.