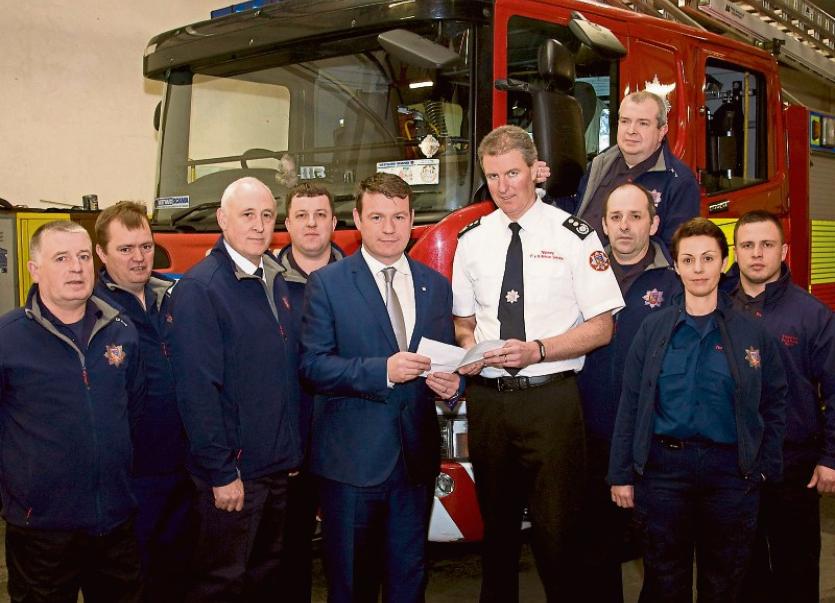 After 30 years Cashel is to get a new fire station.

On Thursday last Minister Alan Kelly came to the current station to announce details of the new fire station, as part of an overall programme of construction/refurbishment of fire stations throughout the country.

The existing station on Ladyswell Street no longer fits the criteria laid down for such facilities on a number of grounds; location, accessibility, the age and condition of the building and lack of training facilities for the fire crew..

The new three bay station with appropriate ancillary accommodation, associated training yard and drill tower, will be built at Wallers Lot, on the outskirts of Cashel and the site of the current County Council depot.

The Cashel brigade took occupancy of the current location in 1986. The former McInerney’s garage was built in the 1950s by the late Patrick and John O’Connor, Dangan, Cashel, who at the time were main agents for Massey Ferguson in Munster.

Previous to that Cashel Fire Brigade was based at upper Friar Street in a purpose built station dating from 1953 and before that in the entrance hall of the old Town Hall on Main Street.

Coincidentally an original snippet on this very subject, from a local newspaper dated January 31 1953, surfaced over the weekend.

A Dance - and out goes the Fire Engine

Cashel has a modern fire engine. But, at times it is a bit of a nuisance. For whenever a supper dance is held in the town, the engine must be shifted.

Down the town it is driven-quite slowly and without the bells and in to “Hannigans Garage.”

The Town Clerk, Jack Maher, one of the fire fighters, gets the garage key and the boys are notified: “If there’s a fire, we meet at Hannigan’s Garage!”

The Town Hall garage is cleared and the supper buffet erected. And down the wide staircase from the town’s only ballroom in the Town Hall come the hungry dancers into the garage, to take their snacks. Who cares about a whiff of petrol or oil?

A new €1,000 fire station has just been built in Cashel. But the lighting is not yet competed. So the engine- and the dancers- must wait some more weeks for comfort.