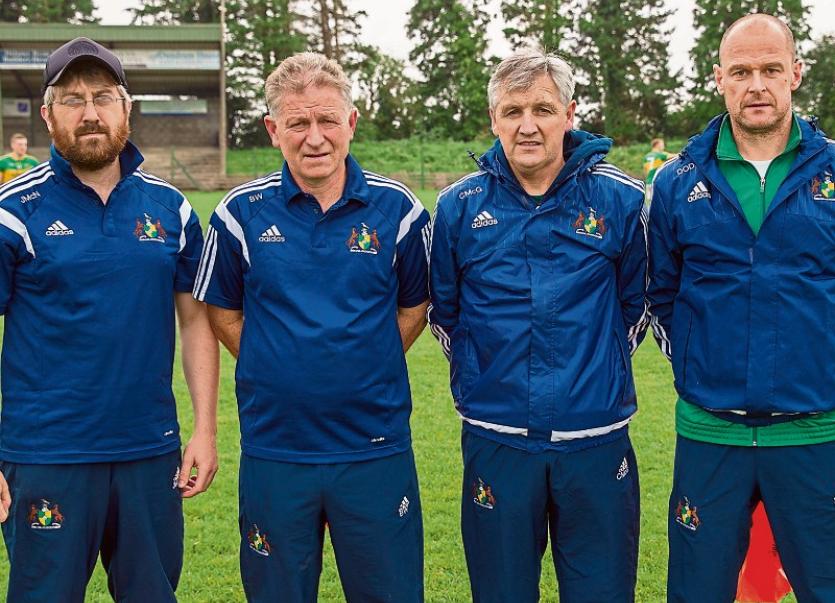 Their defeat of Nemo Rangers in the Munster Final last November created history, as Clonmel Commercials became the first Tipperary team to win the senior provincial football championship since its inception in 1965.

Yet the victory was no cause for celebration for team manager Charlie McGeever. "I didn't celebrate because we were stuck with another match a fortnight later", he says.

"Having won in Mallow I was really worried that we would take our eye off the ball in London", he said in reference to the All-Ireland quarter-final they played against Tír Chonaill Gaels in Ruislip on December 12.

"There was more pressure on us going to Ruislip than there was in the Munster Final because very few people gave us a chance against Nemo; but no provincial champions had lost a quarter-final in London.

On top of that the lads celebrated hard after the Munster Final and I was worried it would be a step too far".

However the manager's fears were unfounded, as Commercials swept to a convincing 2-12 to 0-9 victory. "That was our most mature performance of the year, the game wasn't in doubt from beginning to end.

This team has answered every question that has been asked of them all year and there's no reason to expect that they'll stop doing that".

Some more difficult questions will be posed this weekend, when Commercials take on Leinster champions Ballyboden St. Enda's in Saturday's All-Ireland semi-final in Portlaoise, nine weeks after that successful foray into London.

"We're going in as underdogs", says Charlie McGeever. "Ballyboden are one of the biggest clubs in the country and they're Leinster champions, the pedigree is there. They have All-Ireland inter-county senior medal winners in their ranks and the Player of the Year from 2013 in Michael Darragh Macauley.

They tick a lot of the boxes for favourites. They are a similar club to Nemo Rangers, with a good mixture of youth and experience. They also have top players such as Stephen Hiney, Conal Keaney and Colm Basquel. They also have a huge asset in Paul Durcan, the Donegal goalkeeper who they're flying home from Qatar for the game, which also gives an indication of their financial muscle. Ballyboden are a big, strong and physical team. They have a great will-to-win. They looked beaten in the Leinster Final against Portlaoise but a combination of that will-to-win and Portlaoise's inability to get over the line saw them through. You would have to respect that performance and result because Portlaoise have been county champions for something like the last ten years".

After landmark victories in Mallow and Ruislip Commercials took a couple of weeks break over Christmas.

"When we returned training on January 2 everyone made a commitment that we would give it everything in preparation for the All-Ireland semi-final. Despite school, college, family and work commitments everyone's application has been superb and we've moved up a gear since the start of the year.

The age profile of the team is so young that some of them aren't probably fully physically developed yet.

The break over Christmas was great for them, although I thought there might be a fall-off in their fitness levels. But within a fortnight they were back to the fitness levels they had before the Munster Final. In the last few weeks there has been a big change in terms of their focus".

When asked if it had been difficult to manage the two months break he replied "one of the disadvantages is that we don't know. We're not Crossmaglen or Castlebar (the other semi-finalists), ourselves and Ballyboden (who are each making their first appearance at this stage of the competition) are different and we've never had to manage it before.

Picking up injuries was our biggest concern and fortunately we've lost nobody".

Speaking ten days before the game he said he was delighted they had a full squad to choose from, other than Richie Carroll who's out with a long-term knee injury.

He also made the point that no other competition had such a long break between matches.

"We're still playing last year's competition. Usually the further you go in a championship the games come thick and fast, like they did in the Munster Championship. At some point in the year we'll be left high and dry for the following year", he said, adding that he believes the All-Ireland Championship should be played off in a reasonable time frame.

Despite that his team are dealing with the hand with which they've been dealt.

"We've tried to improve any aspect of our preparation that we can. We've brought in former Tipperary trainer Michael McGeehan to kick us on a little bit and avail of his know-how and experience. He's one of the top coaches in the country and a lot of the boys know him from the county squad.

The County Board gave us Dr. Morris Park in Thurles to train in each Wednesday for the last month and that's a great facility".

Commercials played the Tipperary and Wexford seniors and the Cork U-21s in challenges, matches that Charlie McGeever says were close and competitive and had been a help.

The team went on a training camp to the Gold Coast near Dungarvan last weekend to complete their preparations.

"We're going up to O'Moore Park in the best possible shape and we won't want for either fitness or preparation. I really believe it will come down to the better team on the day and we'll be able to gauge where we are as a club.This will be a step up, no doubt. It will be great if we win and if we lose it will be a barometer of where we are as a team".

Charlie McGeever says that Commercials have grown as a club on their journey to the All-Ireland semi-final.

"Clonmel people who wouldn't have been seen for a while have been coming to the matches and the football has been good, every match has been a contest.

We got a shock when we went to Ruislip because we didn't expect to see so many supporters, it was like a home match. That augurs well for the semi-final and people who haven't seen us play yet will turn up in Portlaoise. Even though Ballyboden are a Leinster team we should also have have the support of Laois people because we're neighbouring counties.

It has been a very positive journey with the team and the supporters and whenever this ends it will be nice to carry that support forward into the future".