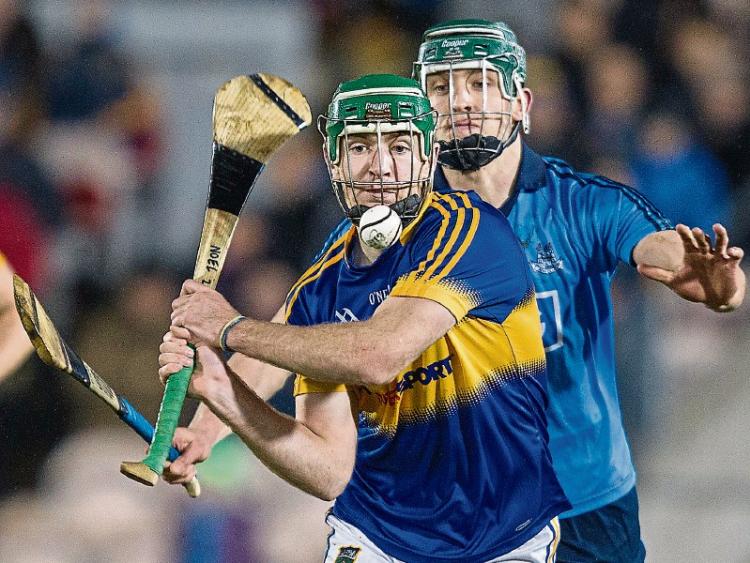 Tipperary didn't compete in the Waterford Crystal Trophy and Dublin won the Leinster equivalent, the Walsh Cup, but it was the home side that was sharper and more incisive when they met in the first round of the National Hurling League at Semple Stadium on Saturday night.

New manager Michael Ryan really couldn't have asked for a more convincing first competitive outing with all but five points of their impressive 1-23 total coming from play.

It wasn't a night for fancy hurling with a constant drizzle and heavy pitch and the direct approach paid handsome dividends for Tipperary, with long balls down the centre reaping a good reward.

And chief to prosper was Jason Forde who hit 1-5 from play in the highlight performance of the night. The Silvermines player led the Dubs defence a merry dance with his goal in the 12 minute setting the tone for the night. He fielded a long delivery, turned and shot low to the corner of Conor Dooley's net.

The score put Tipperary 1-2 to 0-1 ahead and they built on the lead as the game developed. By the 30th minute they were 1-8 to 0-2 ahead, with Dublin hitting just one point from play, and the visitors had only added one more score by the break when Tipp led 1-9 to 0-3.

Ten first half wides might be a cause for concern for Tipp but the conditions were difficult and at least they were creating the chances. Dublin were much less productive, too often dropping balls short into the grateful grasp of keeper Darren Gleeson, with free-taker Paul Ryan really off his game from placed balls and replaced for the second half.

While Forde was top scorer, Conor Kenny chipped in with three good scores and new Tipp Person of the Year Noel McGrath celebrated with a nice brace.

Tipperary might have had a goal in the first thirty seconds but Conor Dooley saved brilliantly from a John McGrath shot and although Michael Breen was wide from the follow up, Conor Kenny put Tipp ahead in the second minute.

Newcomer Daire Quinn hit two wides in a row with John McGrath off target from a free and when Paul Ryan equalised from a free in the ninth minute following a Michael Cahill foul on Dotsy O'Callaghan, it looked as if Dublin might make Tipp pay for their laxity.

But in truth their challenge soon started to peter out. Forde restored Tipp's advantage with a point, then hit the game's only goal, and Conor Kenny made it 1-3 to 0-1 in the next move.

O'Callaghan hit Dublin's first point from play in the 13th minute but Tipp hit back with five without reply. It was all one way traffic with two John McGrath frees, two from play from Forde and the other from Noel McGrath.

Daire Plunkett broke the sequence with Dublin's third in the 31st minute but John McGrath restored Tipp's nine point lead from a free following a foul on Bonner Maher. Just before the break Paul Ryan summed up Dublin's difficulties in the first half when he failed to properly rise a free in front of the posts that was blocked and cleared.

Noel McGrath resumed in the second half where Tipp had left off in the first with a superb point within forty seconds from the sideline. McMorrow replied for Dublin within two minutes and for the third quarter the Dublin play improved as they traded point for point with the Premier without ever threatening the lead.

Mark Schutte and sub Colm Cronin replied to a John McGrath free, then when Forde pointed after a sweet interchange of passes with Noel McGrath, Dublin came back through McMorrow to make it 1-12 to 0-7 eight minutes into the half.

Wing back Paudie Maher then made his first scoring foray forward with a superb score, followed by a David Treacy free.. And when John McGrath pointed from a free, the visitors hit back with two in a row from sub Darragh O'Connell and another Treacy free to bring the Tipp lead back to seven, 1-14 to 0-10 midway through the half.

But that was as close as they got as Tipp stepped up a gear again, with subs looking eager to make their mark. John McGrath and Forde hit lovely points in the space of sixty seconds before sub Dylan Fitzelle marked his arrival with one of the best points of the game.

John McGrath stretched the lead to 1-18 to 0-10 before Bubbles O'Dwyer announced his arrival in some style, hitting three lovely points in the space of five minutes, with a Treacy free the only Dublin response.

As the clock wound down, an Eamonn Dillon score for the Dubs was sandwiched between another Conor Kenny point and Paudie Maher's second of the day to complete the scoring.

It was very much job done for Tipperary and a promising start to what will be a very competitive league.

Michael Ryan has committed to using his panel as widely as possible and certainly his blend of experience and youth worked here, albeit against a below-form Dublin who failed to reproduce the form that had seen them win the Walsh Cup.

In the full back berth, Tossy Hamill, flanked by the experienced Cathal Barrett and Michael Cahill, had a very steady game, while the new midfield pairing of Michael Breen and Daire Quinn had the better of their more experienced Dublin opposite numbers, Niall McMorrow and John McCaffrey, before eventually making way in the second half.

Jason Forde was the star performer upfront with a display that will surely cement a regular starting place, while Conor Kenny and the McGrath brothers Noel and John all looked sharp - Noel making his first competitive start since his surgery for caner and highlighting his display with one super score.

Sub Dylan Fitzelle did his prospects no harm at all when introduced while Bubbles certainly indicated to the management team that he wants a starting spot.