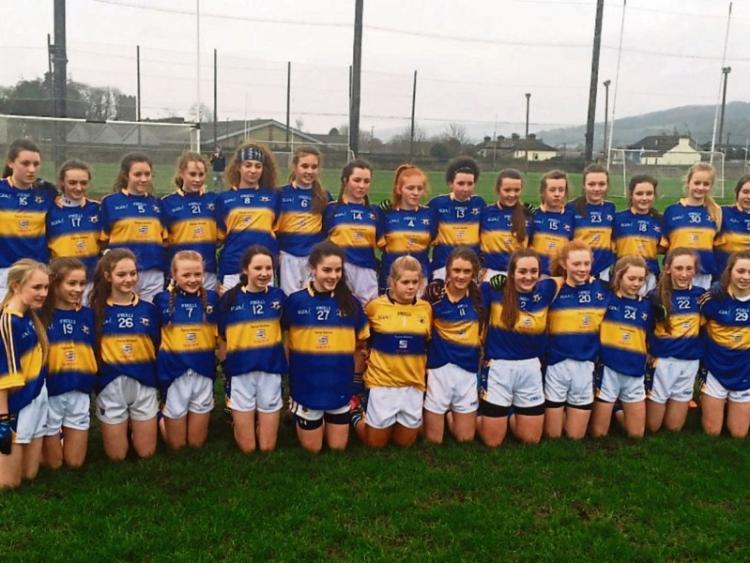 Tipperary Under 14 girls began their Munster football campaign with an opening round win against Limerick on Saturday in Clonmel.

Limerick won the throw in but Tipperary turned over the ball immediately and Orla Winston set up Tipp’s first attack which resulted in Alice Ryan slotting the ball over the bar for the first score of the game.

Tipperary dominated the next 15 minutes during which joint captains Ciara Dwan and Caitlin Kennedy scored a goal and a point. Limerick goalkeeper Leah Hayes Coen was in excellent form pulling off superb saves in the 3rd, 6th and 15th minutes to keep Limerick within touching distance.

A goal from Limerick’s Sarah O'Brien and a point from Emer O’Keeffe in quick succession brought Limerick right back into contention to leave the score at 1-2 to 1-1 for Tipperary with 17 minutes gone in the first half.

As the game began to open up more Tipperary finished the half strongly, scoring 4 points and a goal from Ava Fennessy to leave the half time score, Tipperary 2-6 Limerick 1-1.

When the second half commenced Tipperary hit a “purple patch” and showing some lovely footballing skills took the game to Limerick. The forwards began to show excellent interplay and moved the ball seamlessly into free space and within ten minutes had scored 2:5 without reply, Tipperary 4:11 Limerick 1-1. Great credit must be given to Limerick, where most teams might throw in the towel, Limerick did the opposite and showing excellent heart and determination put Tipperary under immense pressure for the last 20 minutes.

A penalty was converted by Limerick’s Iris Kenneally in the 42nd minute and the same player popped up again up with a point in the 44th minute.

The final two scores of the game came from Tipperary with a point from Caoimhe Mulcahy and a goal by Caitlin Kennedy from a well worked 45m to leave the final score Tipperary 5-12 Limerick 2-2.

This was a fine team performance from Tipperary throughout the field. Attacks began in defence and the forward lines were in scoring form.

There were outstanding performances all over the pitch with Tipp’s midfield paring of Dervla Heffernan and Orla Winston putting in a tremendous hour's work.

If this Tipperary team can maintain this form in the remainder of the Munster campaign they have the players to go a long way in this year’s championship.