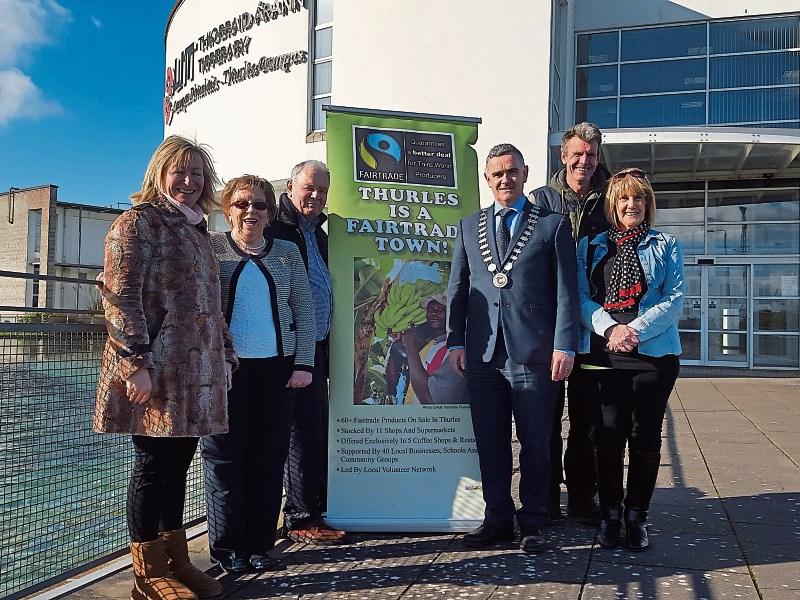 Thurles Fairtrade Town Committee are all set to host the annual Fairtrade Fortnight which runs from Feb. 29th to March 13th.

A series of events have been organised to mark the fortnight and Chairman of Tipperary County Council, Councillor Seamus Hanafin has endorsed the initiative.

“I would encourage all the people of Tipperary to renew their support for Fairtrade during the two weeks February 29th to March 13th which has been designated “Fairtrade Fortnight” and to ask all retail outlets to stock Fairtrade Products.

By switching to Fairtrade for their regular shopping for products such as Teas, Coffee, Sugar, Chocolate bars, Bananas, Cotton Goods etc. Tipperary people make a difference to small producers in developing Countries. The Fair Trade model has been shown to be effective and to assist its target group. Carrick-on-Suir, Cashel, Nenagh, Roscrea, Thurles, and Tipperary Town have all achieved Fair Trade Status. Cahir, Clonmel and Templemore have worked in the past to achieve this status and I would urge all other areas to get involved in this very important and worthwhile venture,” Cllr Hanafin said.

The following events have been organised in Thurles during Fairtrade Fortnight.

Jose Omar Rodriguez Romero – just “Omar” to his friends – a 4th Generation coffee producer, coffee lover, and resident of the village of Capucas, San Pedro de Copan, Honduras, accompanied by a representative from Fairtrade Ireland, will give a talk in LIT Thurles Campus on the benefits Fairtrade has brought to his communityon Thursday March 3rd at 10.45. The general public, schools are more than welcome to attend.

A big breakfast in conjunction with the Credit Union will be held where any members or visitors will be invited to taste Fairtrade bananas, tea and coffee, and cakes made using Fairtrade products where possible on Thursday March 10th between 10 and 12.