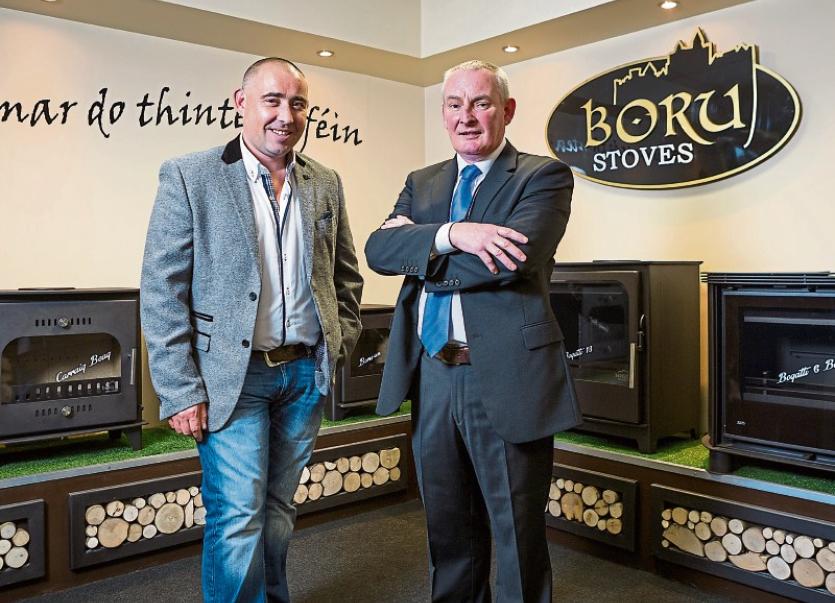 Homegrown business Boru Stoves look set to have another very successful year following their announcement they are to create up to 30 extra positions across the company in the coming months.

This latest expansion brings employment at the factory to almost 100 people while the new positions will be in engineering roles, sales and machine operators.

The company, which began operating at the beginning of the recession in 2008, has since grown to become the country's leading manufacturer of stoves as well as carving out market opportunities in America and Europe.

The company was started by father and son team Edward and Dermot Fitzgerald who spotted an opening in the market for Irish produced stoves made from locally sourced materials rather than importing ready made stoves from China. Within days of their 'eureka moment' Edward, who had almost 40 years experience in the home heating industry began developing the first Boru product while son Dermot focused on a marketing campaign.

Despite coming in for criticism for attempting to start a business in the middle of a recession, Dermot and Edward said they believed they had a “successful product” from the start.

“In a way starting in a recession may have helped us initially. The price of oil was very high and people were looking for other ways of heating their homes,” explains Edward.

In the first three years of business, Boru Stoves grew by 100 percent year on year with last year's turnover for the company hitting €4.5million. Having firmly established a client base in Ireland and the UK, Dermot and Edward then focused on creating their own R&D team to bring new products to market. Their latest invention, the “Bogatti” has already been patented with its international launch taking place at a trade fair in Verona, Italy this week.

In the first year there were nine employees working in the company, jumping to 25 by 2012. Soon after, the original manufacturing premise in Golden became too small to deal with demand so a new production and sales location was selected at the former Dwan drinks factory on the Templemore Rd in Thurles.

As a further sign of establishing a concrete base in the town the Fitzgerald family recently purchased the building and adjacent lands.

“We're here to stay. We weathered the recession and came out on top. This year is very exciting for us as we bring new innovative products to the market,” says Dermot at a recent showcase day held at the factory. In recent years, Boru Stoves has also carved out a market for itself in LA for people wanting to bring an element of 'the aul sod' to their homes.

“In those cases it's more so for aesthetic purposes that people go for the Boru Stove but we have also proved extremely popular in remote areas in Alaska,” adds Dermot explaining that the Boru Stove has also found a new legion of fans among the 'off-grid' communities who live out in the wilds of northern Alaska.