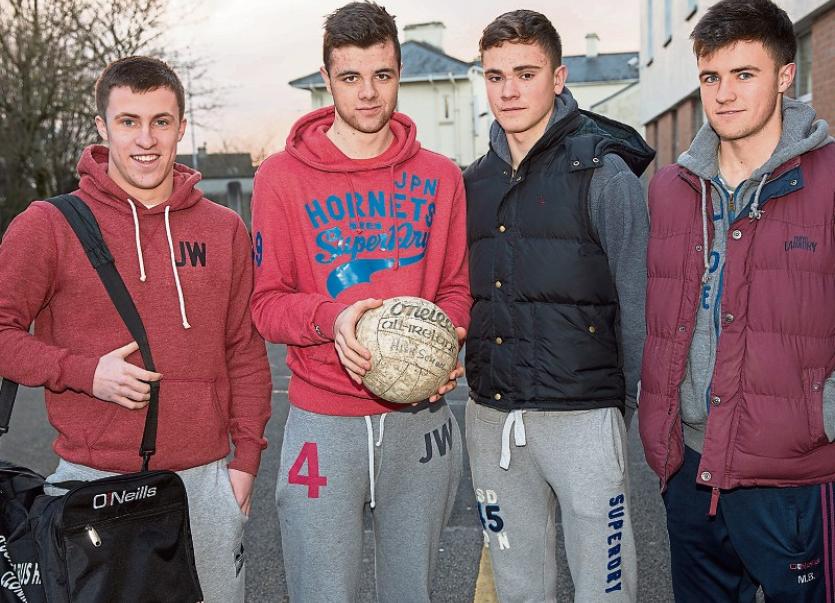 The Munster Colleges Football Championship ‘A’ final goes ahead at Mallow on Saturday next where Clonmel High School will be hoping to bridge an 88-year gap and bring the Corn Uí Mhuirí back to County
Tipperary for the first time since 1928.

However, the challenge facing the High School is huge with no less than the storied St. Brendan’s of Killarney standing in their way; the 20-times competition winners ranked out-and-out favourites, once again, to capture the blue riband of Munster Colleges football.

Eight of the last nine Munster Colleges Senior titles have stayed in The Kingdom with Dingle (4), Killarney (2), Caherciveen and Tralee triumphant, an obvious indicator to the strength of Kerry and minor football in particular. On the other hand, Clonmel High School are the only school from the Premier County to have won this competition, albeit a long lifetime ago.

The Clonmel school, backboned by players from The Nire, Moyle Rovers, Clonmel Commercials, Kilsheelan/ Kilcash, and Ardfinnan, are fully deserving of their place in the Munster U18½ showpiece having come through a tough four-team group, followed by quarter-final and semi-final wins.

In the group stages High School recorded wins over Killorglin and Rochestown before losing out narrowly to Tralee CBS, but still qualified on points difference for the knock-out stages.

In the quarter-final they defeated Ballincollig by 1-11 to 1-8 and in the semi-final two weeks ago had six points to spare over Rochestown, 1-10 to 0-7, in a game played at Fermoy.

In comparison St Brendan’s breezed through their group with comprehensive wins over Abbey CBS (Tipperary), St. Flannan’s (Ennis) and Coláiste na Sceilige (Caherciveen), winning by margins of 12, 10 and 20 points respectively.

In their quarter-final against fellow Kerry side, PS Chorcha Dhuibhne they destroyed the Dingle boys by 13 points, a seriously impressive result considering the West Kerry school were going for a fifth Munster crown in-a-row, and a third consecutive All-Ireland (Hogan Cup) title.

In their semi-final encounter ‘The Sem,’ as it is locally known (even if it is no longer a diocesan seminary) had 15 points to spare over St. Flannan’s.

The pedigree of St. Brendan’s College is famed in football folklore. They have a tremendous tradition and and a look-back at some of their former ‘star’ pupils is like a who’s who of the very best in Gaelic football. Paidí O Sé, John O’Keeffe, Pat Spillane, Seamus Moynihan and Colm ‘Gooch’ Cooper are all alumni who have donned the famed green and gold of St. Brendan’s. You would be challenged to find a more famous five anywhere in Gaelic football. Today’s crop also wear that badge of honour and carry that weight of expectancy every time they grace a football field.

All that stated, the Clonmel boys are going in to this Munster final in very determined mood and hopeful of pulling off a major shock.

Team manager, Tony Gleeson, while cognisant of the huge threat St. Brendan’s pose, has great belief in his own charges.

“We came through a tough campaign to date and are delighted to be in a Munster ‘A’ final competing against the very best in the province. We are just one of three secondary schools in the whole of Munster now playing both ‘A’ football and ‘A’ hurling (Corn Uí Mhuirí and Harty Cup) and those demands were a factor in our earlier defeat to Tralee CBS.

“St Brendan’s won the Frewen Cup last year before losing the All-Ireland final to Good Counsel of New Ross. This year’s Corn Uí Mhuirí side is made up mostly of that Frewen Cup winning team. You must also remember that St. Brendan’s have a plethora of Kerry minors in their side - both from last year’s All-Ireland winning minor team and on this year’s Kerry panel. We are basically playing a Kerry minor team on Saturday next,” added Tony, a teacher in Clonmel High School since 1981.

The three-times county winning senior medallist with Clonmel Commercials went on to add:

“All that aside and knowing we are up against it from the start, let’s not forget this is a two-horse race. We have an equal chance. We ran St. Brendan’s to three points last year so we won’t be afraid of the challenge facing us. We have a more balanced side this time round, more a team effort without relying on particular individuals to produce outstanding performances. We won’t lack in endeavour, we won’t want for commitment on Saturday next, we know we have the skills and the ability to mix it at this level provided we play to our potential on the day.”

“I am satisfied with the way things are going of late for us, we are going well in training but (speaking ahead of the weekend) I am worried about injuries. There is a full programme of minor hurling and under 21 football this weekend with different county panels training. It is chock-a-block and I am hoping no one picks up knocks. We could have done without all of that,” he said.

Tony, who coaches the side along with fellow teacher and former High School pupil, David Nugent of The Nire (Waterford minor football manager for 2016), knows exactly what his charges have to come up with on the day if they are to produce an upset.

“We have to start well needless to say. At various stages this year we have put in some good first half performances and slackened off, and on other occasions we finished strongly having not started so well. We have defended trojanly at times along the way and we have worked some good scores also. But against St. Brendan’s we will have to combine all that and we will have to go from the start and maintain that intensity throughout. And we will have to minimise errors and missed chances. They will make mistakes and we will make mistakes and the team who makes the least errors on the day will win,” added the Meath man.

Six years ago the Clonmel High School were successful in both the Munster ‘B’ and Ireland ‘B’ colleges competition, defeating St. Attracta’s of Tubbercurry (Sligo) in the All-Ireland final played at Portarlington.

Since then Ard Scoil na mBráithre have been competing at the top table of Gaelic football and, like so much in Tipperary football of recent years, have been making steady progress. Saturday next is another giant step on that journey and the Clonmel school are under no illusions about the task ahead.

“Nothing is expected of us against St. Brendan’s of Killarney and we have absolutely nothing to lose. We are underdogs, no doubt, rank outsiders and all of the media don’t give us a chance. But the High School have been underdogs all their lives, we are used to that and we are hoping that that will motivate us in the final against Killarney” concluded Tony.