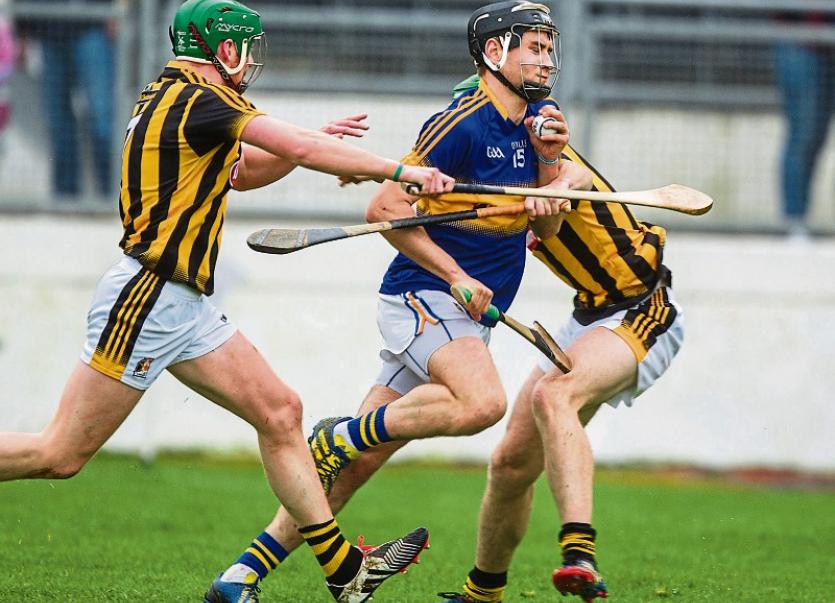 It may be a new season but it’s the same old story.

The shadow of Kilkenny continues to darken our horizon.

A two-goal, double-whammy at the end offered a familiar – and depressing – script.

It may still be only February during the early skirmishes of the league, but Sunday last at Nowlan Park felt uncomfortably familiar.

Another spring it may be, but there’s no new beginning.

Once again Tipperary failed to stay the distance. The similarities with last August in Croke Park were scary – even down to the unfortunate slip by Cathal Barrett. Seven months ago it was that slip which let Shane Moloney in for the Galway winner; this time an identical misfortune set Jonjo Farrell free to set up the match-changing goal for Kevin Kelly.

It was unfortunate for the corner back who’d played well but where was the cover when he lost his footing? At a time in the game when we were ahead by a point and needing to keep everything tight and secure we left ourselves woefully exposed at the back. Look at the space that was available to Kilkenny in front of Darren Gleeson in those final moments as Mickey Cahill had been drawn outfield and nobody tracked back to fill the void.

It’s a case of lessons not learned as once again we fail to nail down a game in those critical final few moments. It’s all fine and dandy to put on a display for sixty-five minutes but most key games are won and lost in that final phase when concentration is vital.

The optimists will point to the positives where Tipperary weren’t led until the sixty-seventh minute.

A squandering of goal chances, however, had left the team vulnerable to Kilkenny’s final push. Conor Kenny started the trend with that open-goal miss in the very first minute. ‘Bubbles’ brought a great save from Eoin Murphy shortly afterwards; keep it low and bouncing has to be the advice on those efforts. There was another half-chance when John McGrath might have earned a ‘penalty’’; then in the second half ‘Bonner’ failed to beat Murphy and another half-chance fell to Niall O’Meara but the pass was a little too far ahead of him.

That’s a lot of goal opportunities with zilch to show for it all. Kilkenny too missed a few chances but crucially ‘nailed’ the two that really mattered.

Out of it all you can pick some positives but if you want to learn, as Mick Ryan suggests, then it’s the negatives that must be addressed. And there were worrying negatives that can’t be sugar-coated.

Going into this contest most pundits would have agreed that Tipperary had a really powerful half back line on duty. This surely would be the buffer to shield the inside line and act as a launch pad for attacking moves at the other end. Unfortunately it did neither. James Barry did most hurling of the three but overall it was a line that was out-muscled and could never cope with the physicality of the likes of Reid, Fennelly, newcomer Maher and, at times, Walter Walsh.

There were times in the first half especially when Brendan Maher seemed to forget that the primary function of a defender is to mark an opponent. Kilkenny’s rookie, James Maher, was afterwards declared man-of-the-match – no further comment needed.

For Paudie Maher too it was a forgettable occasion, the patience of the management finally snapping near the end. There are times when his hurling seems clueless: like the crazy tackle on Reid; or the unhurried clearance straight to Walter Walsh for another point; or the wind-up for another clearance which, like against Galway last year, is again baulked only this time, luckily, it ricochets wide.

As a potential championship half back line this display has reopened the debate about that formation. Again at the attacking end ‘Bonner’ has been earmarked as the leader of the pack, yet on Sunday another unknown newcomer, Robert Lennon, completely overshadowed him. If our key men, the would-be leaders of 2016, are found so wanting then what hope for the newcomers?

There’s been much comment on our altered style of play with a preference for ‘the modh direach’, route one direction. It always presumes we have ball winners on the receiving end and hasn’t that been a difficulty in past years. It’s a difficulty that hasn’t gone away, you know, which should be no surprise given our reliance on a lot of similarly-styled players. In future, I suspect, we’ll have to mix it up more rather than this endless hoofing of long ball into attack.

There were some notable positives, such as the impact of John McGrath in attack. It’s not too often that we see Paul Murphy’s direct opponent make such an impression. ‘Bubbles’ too, I felt, put in more graft this time than is usual, which again must be recognised. Tomas Hamill was another to endorse recent impressions, again looking solid at full back.

At midfield Michael Breen had a decent shift overall, though caught too easily by the block on at least one occasion. Daire Quinn did okay early on but faded and was replaced.

Otherwise I thought it was encouraging to see Mickey Cahill continue recent trends. Cathal Barrett too did a deal of useful defending though he needs to avoid the aggravation, which became a distraction, especially when Jonjo Farrell came on. Dan McCormack’s work rate is never lacking though whether he has the hurling to complement it is still at issue. Noel McGrath made some useful contributions but needs to be more centrally involved. None of the replacements got much chance to impress, Niall O’Meara probably doing the best of them.

A final comment on the game: the refereeing was poor. The yellow card dished out to Michael Breen was a crazy call – was it even a free? Then the wild pull across Cathal Barrett’s leg went unnoticed by ref or umpires. Players deserve a better standard of officiating.

On a bad weekend for Tipperary hurling generally Our Lady’s Templemore came up short in their Harty Cup bid, failing by three to Ardscoil Ris of Limerick in a dogged encounter at Nenagh on Saturday.

The game was really lost in the opening half when Templemore had the strong wind at their backs and needed to build a buffer of at least five or six points to defend on the turnover. Instead they retired just two up and were always going to face a struggle to get over the line on those figures.

In fairness they never ceased battling and Ardscoil, who hit nine second half wides, could never get into the comfort zone.

A few breakaways by the Tipperary school threatened to upset the trend but Ardscoil were tenacious too and deservedly held out for the win.

It wasn’t the prettiest of games in the conditions with defences packed and well on top – neither goalie had a save to make. Harty hurling can often be like that at this time of year.

Individually I thought Bracken’s Paddy Cadell was impressive for Our Lady’s.

This result means that Tipperary schools have now contested seven of the past nine Harty finals but the Thurles wins of ’09 and ’15 have been the only successes. It’s a pattern that’s not unlike our county’s senior hurlers – close but rarely winning.

Finally the West division last week lost a notable personality with the passing of Jimmy Hennessy, Dundrum. In his ninetieth year Jimmy featured in many different capacities in the association. His playing days coincided with Kickhams’ era of dominance in the West during the fifties. Then in the sixties he switched to the boardroom replacing his neighbour, Jerry O’Dwyer, as West secretary for over a decade.

At county level this was an era when the divisions supplied county selectors and right throughout the sixties Jimmy featured on various county selection committees. His greatest moment in that capacity was undeniably in 1971 when he teamed up with John Lanigan, Theo English, Kieran Carey and Sean Ryan as the senior hurling selectors on the All Ireland winning team, which beat Kilkenny in the final – O happy recall!

On a personal level he was the man who cajoled this scribe into replacing the late Bill O’Donnell as West Tipp PRO, a route that subsequently led to this column. It’s probably something that not everyone will thank him for! Anyway he was a passionate GAA man. May he rest in peace.