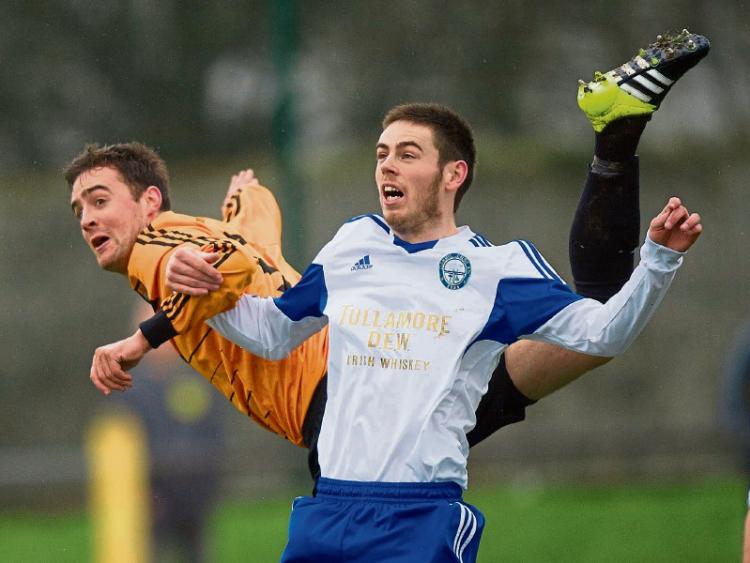 Clonmel Celtic continued their good run of form against neighbours Clonmel Town with a hard-fought but well deserved 2-1 win at the Complex on Sunday afternoon.

In a response to those who thought that Celtic’s recent good form against Town could have ended given their indifferent form of late and some recent impressive performance from Town, the visitors produced a perform-ance when needed.

They started the game well and looked the better side in the early exchanges. On 25 minutes they hit the front when David Joyce got on the end of a Kevin Waters through ball and he chipped the advancing keeper to give Celtic a deserved lead.

It got even better for Celtic ten minutes later when Ross Condon was on the end of an Ian Barnes cross and he fired home to put Celtic two up.

Tony Scully missed a chance to pull one back for Town late in the first half and the home side improved in the second half coming more into the game.

That said, Celtic had a number of opportunities to put the game to bed. It looked as if they might regret these missed chances when Paul Shanahan slotted home from a corner 17 minutes from time to set up a tense finale and it was made even harder when Ian Barnes was harshly given a second yellow to leave Clonmel Celtic with ten men for the final minutes but they dug deep to hang on for a deserved win.

St Michael's always had the edge here at a damp Cooke Park on Friday night.

After a number of early chances, the home side finally took the lead in the eight minute when Joey Mulcahy picked out Shane Murphy on the right and he got in behind the defence to square for Pa Quinn to score from close range.

Quinn again went close again two minutes later and a Brian Buckley free kick on twenty minutes just flashed by the post. Buckley finally scored the second just before the half hour mark, with a rebound from close range, and David Grincell made it 3-0 six minutes before the break with a great finish from a Mark Hoban pass.

A minute before the break Christopher Higgins was fouled in the area and David Slattery hammered the penalty to the net to give his side a very comfortable half time lead.

The second half followed a similar pattern and Grincell made it five shortly after the break scoring from close range following a Joey Mulcahy corner kick. The tempo of the game dropped a good bit after this and Old Bridge had some good moments before Shane Power got a goal back on the hour mark with a good left foot effort from inside the area.

Saints then brought in Padraig Fogarty, John O’Brien and Ryan Deere, and Deere made it 6-1 with nine minutes left when he rounded the keeper and passed to the net. Grincell got his hat-trick three minutes from and put Saints firmly on course for the league title.