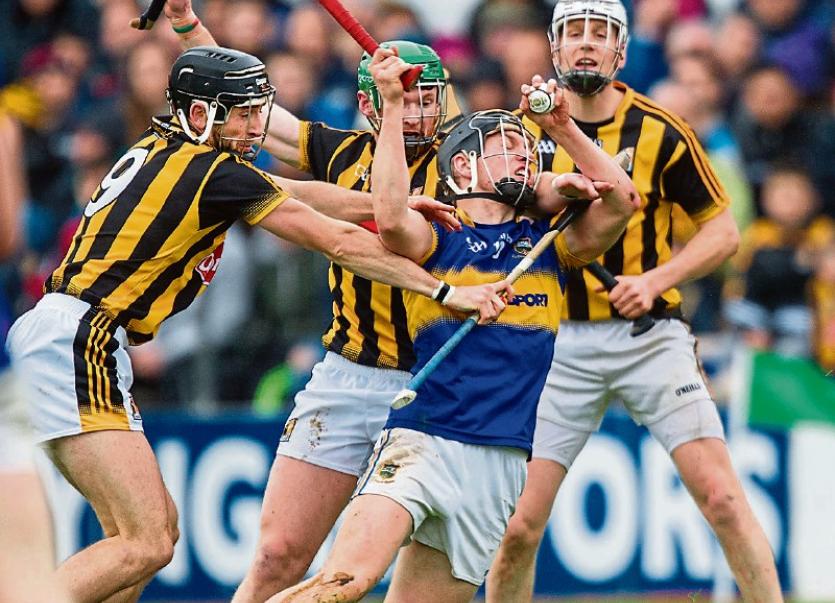 It seemed that Tipperary were on course for a rare victory over Kilkenny but then the All-Ireland champions found a way to win, like they usually do.

Tipp were inching towards what would have only been their third win against Kilkenny in thirteen attempts since 2010 but the rug was pulled from under their feet in the dying embers of Sunday's National Hurling League game at Nowlan Park.

Having led for practically all the way they were outscored by 2-3 to 0-2 in the last seven minutes, including additional time, to extend that depressing sequence.

And so, not for the first time, a Tipperary team had failed to wrap up a victory that was well within their compass. Four minutes of normal time remained when TJ Reid converted a free to leave just a point between them. The stage was now set for a grandstand finale between teams that had battled with typical intensity in front of an attendance of almost 11,000.

Then in the 67th minute substitute Jonjo Farrell took advantage of Cathal Barrett's slip to lay the opening goal on a plate for Kevin Kelly and put Kilkenny ahead for the first time. It was the only time that Barrett - his team's best defender who minutes earlier required treatment after he had put his body on the line to block a goal-bound effort- had been exposed.

Bubbles O'Dwyer responded with a converted free but the pendulum of superiority had now swung in favour of the home side and TJ Reid had a point from play, before Bubbles gave Tipp some hope with another accurate free in added time.

However that hope was extinguished when goalkeeper Eoin Murphy's puckout broke kindly for Kevin Kelly. Instead of taking the easy option of a point he went for the jugular and drilled a low shot past Darren Gleeson. TJ Reid added further salt into the wounds with a late point from distance.

Tipp manager Michael Ryan pointed out that it was still only February and that more lessons can be learned from defeat than victory. However this game amply demonstrated the size of the task facing him, as he attempts a rebuilding job. His brief honeymoon period, following that big win over Dublin, is now officially over.

Having played with the wind in the first half Tipp were in front by a point (0-9 to 0-8) at the midway stage, which was a slender advantage in the conditions.

A John McGrath point meant that the lead stood at 0-9 to 0-5 after 26 minutes but then unanswered points from Kilkenny's TJ Reid |(from a free) and two from the impressive James Maher altered the game's mood.

Two points within a minute of the restart, from John O'Dwyer and John McGrath, gave Tipp some breathing space. A TJ Reid free, Padraig Walsh from play and TJ Reid, with his first score from play, had Kilkenny back on level terms 8 minutes into the second half. Noel McGrath restored Tipp's slight advantage before Bonner Maher missed a great chance to extend the lead to four when his low shot was blocked by Eoin Murphy.

However even if they had grabbed a goal at that stage it's debatable whether Tipp would have successfully pushed on for home; the feeling that there was a stronger kick left in Kilkenny, and that they had the wherewithal to prevail in a tight finish hung over Nowlan Park all afternoon.

Insetad of a Tipp goal the next score came from Kilkenny's James Maher to ensure that the sides were level again 12 minutes into the second half. Undeterred, Tipp motored on and as their manager said there was plenty to admire about the performance. After a slow start John McGrath emerged as a player of real importance. He occasionally linked up effectively with his brother Noel in the opposite corner and Noel supplied the pass that enabled John to restore their single-point lead in the 48th minute.

That score followed good work out the field by James Barry; the centre back picked up the level of his performance in the second half, although his direct opponent TJ Reid was one of Kilkenny's most prominent players. A wayward clearance by Padraic Maher was punished by Walter Walsh but a free and a '65 from Bubbles O'Dwyer, who carried one of the main threats in attack throughout the game, put Tipp within sight of the finish line until Kilkenny felled them with those late sucker punches.

Tipp had another sniff of the goal 13 minutes from the end when a stretching Niall O'Meara, who had replaced Conor Kenny, saw his low effort deflected for a '65. Without the benefit of a goal they were always unlikely to escape from Nowlan Park with a victory.

The worry now for the chasing pack is how effortlessly Kilkenny can introduce newcomers into the team without disturbing its overall balance. On Sunday centre back Robert Lennon, wing forward James Maher and wing back Diarmaid Cody, manager Brian's son, all slotted seamlessly into the system.

Tipp had the strong breeze and the drizzle at their backs in the opening period but their supporters in the 10,892 attendance were soon witnessing a familiar problem, as they failed to win sufficient possession from Darren Gleeson's puckouts.

They might even have had two goals inside the opening three minutes - Conor Kenny had a point after 35 seconds when he had the goal in his sights and then Bubbles O'Dwyer saw his piledriver deflected over the bar by Eoin Murphy.

Kilkenny had their first real sight of goal after 23 minutes when Darren Gleeson produced a sharp save from John Power, with James Barry denying TJ Reid from the rebound.With Michael Cahill on his toes in defence and Daire Quinn starting brightly in midfield Tipp had the bulk of the possession in the early stages and a Noel McGrath score had them three ahead (0-5 to 0-2) after 12 minutes. A John McGrath free meant that the gap stood at four after 19 minutes,

That was still the difference after 26 minutes (0-9 to 0-5) but then Kilkenny roused themselves to take much closer order by the break.

The second half proved another eagerly-contested affair, but wind-assisted Kilkenny only thrived on the closeness of it all and the outcome had a certain inevitability about it as the minutes ticked away.