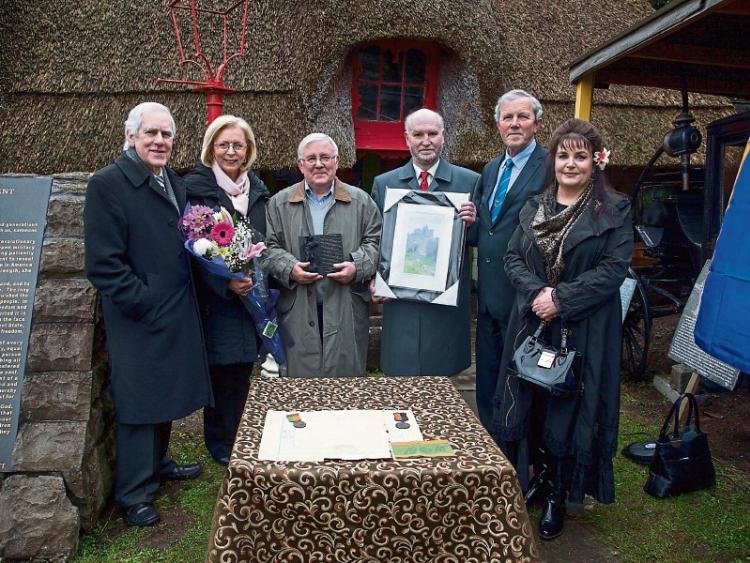 Michael Donovan, born in Boherclough Street, Cashel, in 1898, fought under Eamon De Valera in Bolands Mills in 1916, and subsequently in The War of Independence under Brigadier Oscar Traynor.

All of his original memorabilia, received as a result of his active participation in those historic events, has now been donated to Cashel Folk Village - his 1916 Active Service Medal, plus the armband he wore in combat; his War of Independence Medal plus Certificate; a photograph of Michael with Eamon De Valera and other surviving combatants, taken some years later; his Military Pensions Records; his obituary, wherein he was accorded a full military burial in 1957 with An Taoiseach represented by Lieut. Col. Sean Brennan A.D.C.

All of Michael's memorabilia had been held in a bank vault in England by his nephew Mark, who resides in Merseyside. Because of the historiclal importance of 2016, the centenary of The 1916 Easter Rising, Mark made the extraordinarily kind decision to donate the treasure trove back to Michael's birthplace of Cashel. Mark initally contacted The Cashel Heritage Centre, where Olivia Quinlan very kindly referred him on to Cashel Folk Village.

Mark subsequently spoke to Bernard Minogue in Cashel Folk Village, and after very cordial discussions agreed to fly back to Ireland to make the historic donation. And so, we fast forward to Saturday, February 27, at 12.45pm.

Labhras gave an inspiring acceptance speech that held the large crowd present spellbound, as he brought home to everyone the importance of 1916 in so many different ways. Senator O'Murchú also paid a very fitting tribute to Martin O'Dwyer, famed local historian and founder of Cashel Folk Village, who was a great friend of Labhras. Martin is sadly no longer with us, as we very shortly commemorate the first anniversary of his death.

Martin, through his incredible work, built up Cashel Folk Village into a wonderful 1916 Easter Rising/ Irish War of Independence/ Irish Civil War Museum combined in Ireland, and also the only 1916 Easter Rising Garden of Remembrance/Memorial Plaza in Ireland, and hence no more fitting home could be found anywhere in this country for Michael Donovans 1916 and War of Independence Memorabilia. Bernard Minogue, speaking on behalf of his wife Tracey and himself, thanked Senator O Murchu for his magnificent acceptance speech. thanked the crowd for their attendance, thanked Billy O'Dwyer Bob for his playing of the bagpipes preceding the event, but most of all thanked Mark Donovan and his wife for being so incredibly kind as to allow Cashel Folk Village to be the final resting place for Cashel man Michael Donovan's 1916 memorabilia.

It goes without saying that the collection will receive pride of place within the museum.