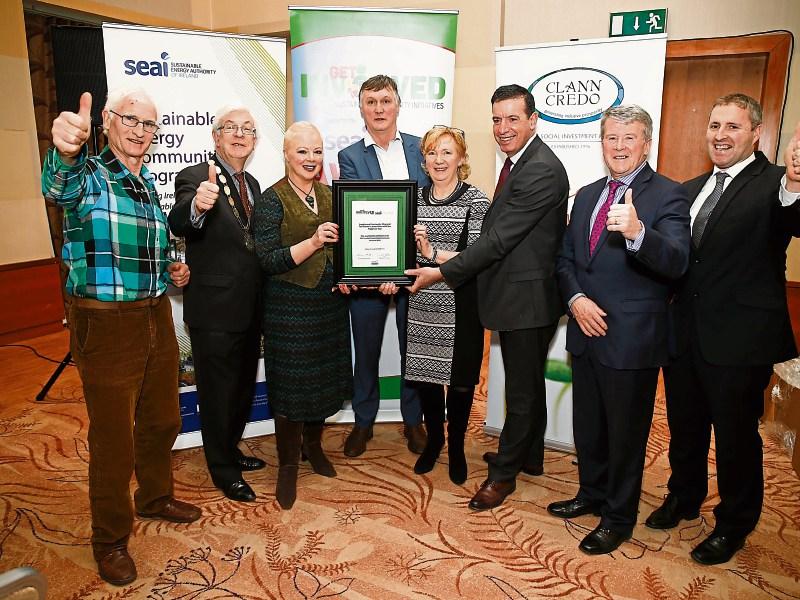 Celebrations were in full swing at Loughmore Cottage and Tearoom last Thursday after it was announced that the innovative co-operative had scooped two top prizes at the annual ‘Get Involved’ competition after being nominated by the Tipperary Star earlier this year.

Loughmore Cottage co-founders Mary Fogarty and Maeve O’Hair along with Loughmore Community Co-Op chairperson Jim Russell were in high spirits as they collected a double bursary of €6,500 for their work in transforming Loughmore and creating a new epicentre in the one-time dying village by establishing a shop, café, post point services and providing a source of revenue for up to 30 locals.

The group took the overall prize of €5,000 at the sustainable communities awards sponsored by the SEAI out of 35 projects put forward by regional newspapers across the country.

As a further mark of their success and recognition, Loughmore Cottage also scooped second place in Clann Credo's Community Impact award as voted by the public taking home a further bursary of €1,500.

A steady flow of well wishers stopped by on Friday morning and over the weekend after news began to spread about the Cottage’s double win in Dublin to show their support and congratulate the Cottage team on all their hard work.

Earlier this year the tearoom received a visit from the judging panel headed up by RTE presenter Duncan Stewart who heaped praise on the work carried out by the Cottage team saying that Loughmore Cottage is the type of “innovative thinking that could save dying villages in every county.”

Loughmore Cottage and Tearoom, nominated by the Tipperary Star, was one of 35 entries put forward by regional newspapers for the 2015 Get Involved Sustainable Communities awards.

Editor of the Tipperary Star Anne O'Grady said she was thrilled to see the Cottage team receive such high recognition.

“We are delighted that Loughmore Cottage and Tearooms received this prize for all the work they have done in bringing life back into Loughmore once again. They were a delight to work with over the past year and are a true credit to Loughmore and the surrounding area,” she said. Co- founder Mary Fogarty said everybody at Loughmore Co-operative were simply “honoured” to receive two such prestigious national awards.

“We are so proud, honoured and privileged for this incredible accolade,” said a delighted Mary who added that the money will be put to very good use to help in the fundraising efforts for a new environmentally sustainable building in the Cottage gardens. “We also want to thank the parish of Loughmore for their continued support over the last four years. We wouldn't be where we are today without the involvement of every volunteer, youth club member or visiting disapora and we are so grateful for all their support,” she added.

Duncan and the judges fell in love with Loughmore's untouched beauty, innovative thinking and possibility for growth on their visit earlier this year, inspired by the work of the community run co-op which has since prompted a host of replica tea rooms and village shops across the country. The Get Involved award is the latest accolade for the Cottage following on from their ' Best Cafe/ teashop in Ireland' title as chosen by the Irish Times in 2012.