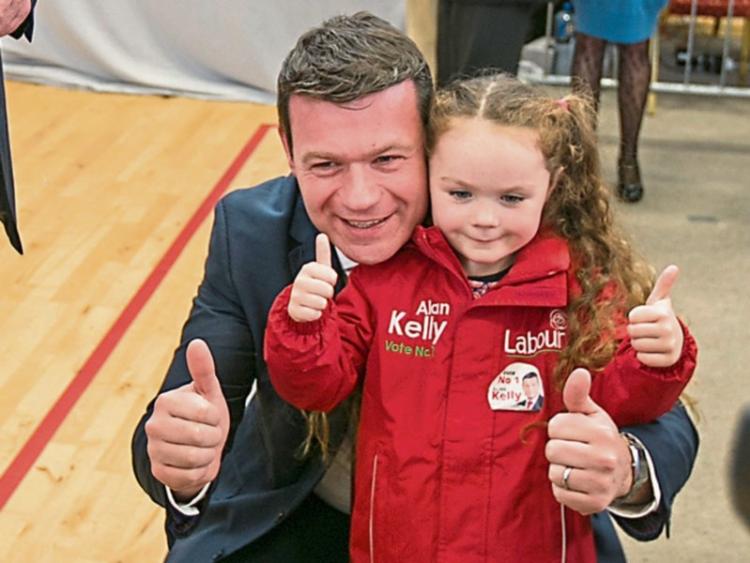 The county has lost two government ministers in this election with Tom Hayes losing his seat and Alan Kelly most likely going into opposition as a member of a greatly reduced Labour Party.

‘The new political landscape means the south of the county is left with the prospect of not having any political representation in the next coalition government unless either of the Independents Mattie McGrath or Seamus Healy reaches an agreement to support any coalition formed.

It's highly unlikely the left-wing Healy will enter into such an arrangment with the mainstream parties.

A staggering 41% of Tipperary voters turned their backs on the main parties and gave their first preference votes to Independent candidates.

Kerry, where the two Healy Rae brothers secured seats, was the only other constituency in the country to vote so strongly for independents.

The big casualty was Fine Gael, which lost both its TDs, outgoing Minister of State Tom Hayes from Golden and Templemore based Noel Coonan, while its third candidate Cllr Marie Murphy from Clogheen was eliminated in the first count.

Tipperary is now without a Fine Gael representative in the Dail for the first time in the party's history.

The party's first preference vote plummeted by 20% from the 2011 election as the electorate punished the outgoing coalition government for five years of austerity.

Tom Hayes, who topped the poll in the old South Tipperary Constituency in 2011, lost out to Labour's Alan Kelly in the battle for the final seat in the seventh count.

The 64 year-old has served as a Fine Gael TD for 15 years and says he needs to consult his supporters before reaching a decision on his political future.

He said the dramatic drop in the Fine Gael vote was undoubtedly a protest vote against the outgoing government that had implemented tough decisions over the past 5 years in putting the country first, he said.

He cited the impact of the abolition of the town councils and amalgamation of the north and south Tipperary county councils to save money and the ongoing problem of patients waiting on trolleys in South Tipperary General Hospital among the issues that prompted voters to vote against the Government parties.

Michael Lowry swept back into the Dail in the first count amid huge fanfare from his supporters.

It was the fifth time in a row he has topped a general election poll but the prediction that he would have a large surplus didn't materialise.

He said it was a "very sweet" election for him because he had done it five times in a row. "We have taken a lot of criticism and we have been subjected to a lot of public scrutiny. I am just so pleased that my family has been able to come through it," he said.

South Tipperary's two outgoing Independents Mattie McGrath from Newcastle and Seamus Healy from Clonmel retained their seats against stiff odds. Newcastle based McGrath had been tipped by many to be, at best, fighting for the last seat but instead he was the second candidate elected after nearly doubling his first preference vote.

Healy overtook outgoing minister Tom Hayes and Alan Kelly in the 5th count when his vote was greatly enhanced through the distribution of the votes of Sinn Fein's Seamus Morris, and secured the fourth seat in the seventh count without reaching the quota.

Along with the Independents, Fianna Fail was the big winner with Jackie Cahill from the Thurles area regaining one of the two seats it lost in its electoral meltdown of 2011. Cahill, a former President of the Irish Creamery Milk Suppliers Association, managed to out vote his arch FF rival Michael Smith, and Smith's transfers brought him over the line in the 6th Count. Fianna Fail's candidate in the south Clonmel Cllr Siobhan Ambrose was eliminated after the second count.

Labour deputy leader and outgoing Minister for Environment Alan Kelly won the battle for the last seat after pulling clear of Hayes in the last two counts after benefitting from the distribution of votes of two other north Tipperary candidates, namely the eliminated Michael Smith (FF) and elected FF TD Jackie Cahill's surplus.

The delighted Portroe man said he was mighty relieved to be re-elected but admitted it was a "bittersweet" momemt as so many of his party colleagues had lost their seats. He said the fact that the constituency's two ministers were left battling for the last seat was something both Fine Gael and Labour will have to reflect on.

"We went into government five years ago to save the country and we did that. Obviously the people aren't fully satisfied with how we did it and we need to reflect on that."

He believes Labour should now spend the new Dail term in opposition rebuilding the party for the local and European elections and he believes Fine Gael and Fianna Fail should form the next government.

"It’s 2016. It’s 100 years since the Rising and civil war politics is over. The country requires a stable Government and I think it’s about time the two of them put their differences aside. There is very little if anything between them and it is time they came together and form a Government. The people voted for that and that is what should happen now,” he said.

The defeated Fine Gael TDs Tom Hayes and Noel Coonan, however, have argued it's time for the Independents to step up and become involved in whatever new government coalition is formed.

Tom Hayes didn't favour a Fine Gael/Fianna Fail coalition. He said the people of Tipperary had voted in three independents so they wanted them in power in governments. "They really need to step up to the plate now and do something instead of whinging from the sideline. They are elected; they have the policies they say to open all the garda stations and rural post offices so let's do it now. This is their opportunity," he said.

Noel Coonan said he would advise Fine Gael to stay out of Govenrment and let those people who had promised so much and who did all the complaining, frightening and scaremongering of the people go into government and address the issues and continue to rebuild the economy.

"I think one term in government would be an ideal dose of medicine for them," he said.