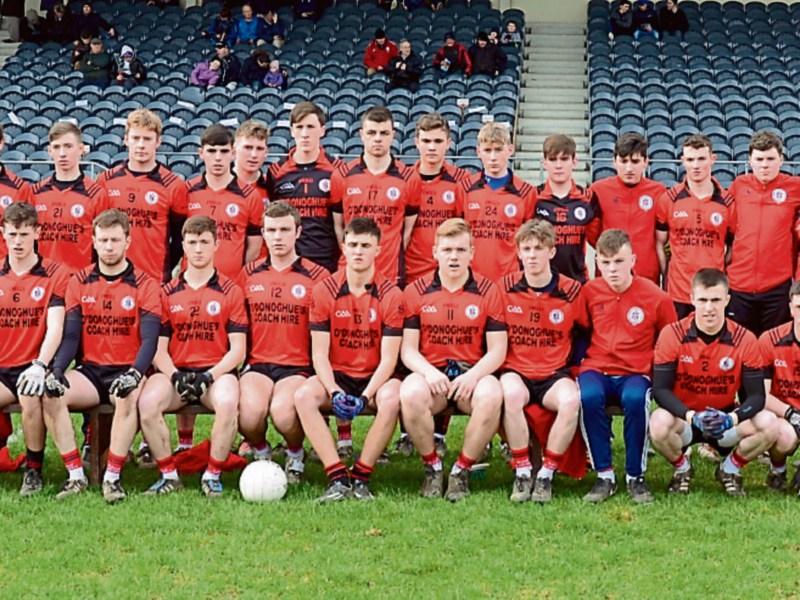 CLONMEL HIGH SCHOOL’S dream of bridging an 88-year gap to bring the Corn Uí Mhuirí back to Clonmel was shattered at Mallow on
Saturday last with a humbling defeat to St. Brendan’s of Killarney.

Well flagged in advance as being a challenge of gargantuan proportions against the aristocrats of Munster colleges football, the yearning of a first title since 1928 would turn into a 29-point nightmare defeat before the full-time whistle was blown.

The 20-times provincial champions came with a stellar reputation having won their previous five rounds by an average margin of 12 points per game and conceding a maximum of 1-6 in any fixture. At 1/5 with the bookmakers prior to throw-in, St. Brendan’s were not alone favourites to sail past the High School but were hotly-fancied by many for ultimate All-Ireland success.

The underdogs started positively, from the throw-in Mark Kehoe was fouled and Michael O'Reilly kicked the resultant 45m free sweetly over the bar for the lead. A glimmer of hope perhaps?

Definitely not so. Within a minute St. Brendan’s picked up on an unforced error and quickly delivered the ball to corner-forward Evan Cronin at the edge of the square. He gave Aidan Tobin no chance with a superb finish.

From the kick-out St. Brendan’s Dara Moynihan gathered at midifeld and a swift three-man move set up the opposite corner-forward Michael Casey for another well-taken goal.

This was exactly the kind of start the High School dreaded, and having been torpedoed twice in just over two minutes it was always a sinking HS CBS ship thereafter.

Killarney were majestic in their fielding around the middle, Lee O’Donoghue, Billy Courtney and David Clifford dominant, and with fast moving interacting wing-backs and wing-forwards seemingly everywhere, they added nine points from play by the 24th minute to lead 2-9 to 0-4.

In the 15th minute a rare opportunity fell to the Clonmel boys when Michael O’Reilly set up Michael Barlow with a goal chance but Killarney keeper David Carroll pulled off an excellent save to deflect over the bar. It was to be their only clear-cut green-flag chance of the day.

In the 27th minute a third goal, courtesy of David Shaw, bobbled over the line following an initial great block by Aidan Tobin. In the lead-up to the goal High School captain Stephen Ryan was black-carded, therefore making a demanding day even more difficult. At half-time St. Brendan’s were 3-10 to 0-6 clear, the destination of the cup already decided.

At the break an all-at-sea High School moved the deck chairs around a little but there was to be no rescue. Three points from play for St. Brendan’s inside the opening 90 seconds of the second half emphasised the gulf in class.

Thereafter it was exhibition football from a super slick St. Brendan’s but full credit to the High School who kept trying manfully to the very end.

Two late goals by substitutes Donnchadh O’Sullivan (penalty) and a scorcher from William Courtney brought an end to a totally forgetful day for the Clonmel High School, their only point in the second half coming in the final minute from Dara Ryan.

It was a cruel lesson for the young High School footballers, the early goals clearly upsetting their confidence and unsettling their shape and thereafter the occasion seemed to get to them.

The disappointment of defeat was magnified knowing that they didn’t do themselves justice on the big stage and the great performances of earlier wins against the likes of Killorglin, Rochestown and Ballincollig on the way to the decider were lost against an albeit far superior Kerry machine. But let there be no doubt the High School are far better than this performance indicated.

On a difficult day there were some spirited displays even in defeat from the likes of Mark Kehoe, Gavin Whelan, Gavin Ryan, Kyle Peters, Michael Barlow and Adam Peters but overall they were playing second fiddle throughout.