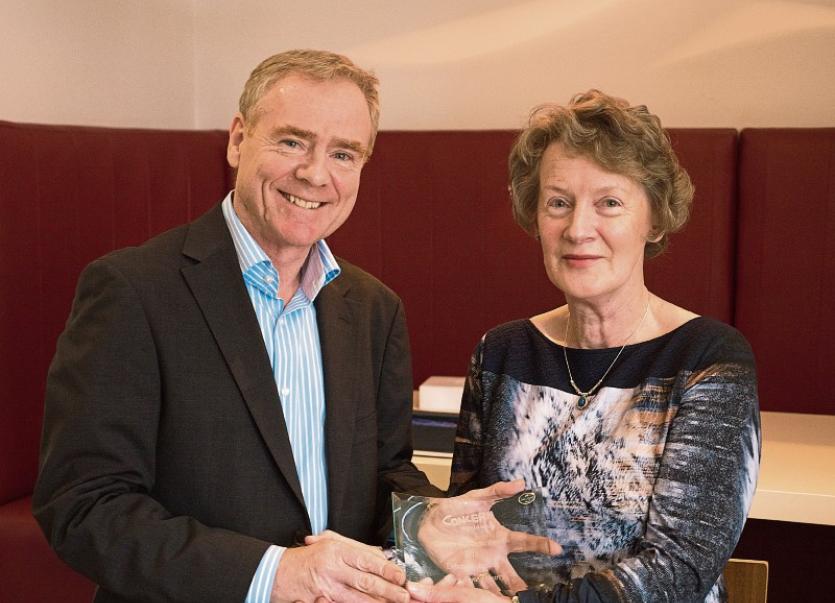 A TIPPERARY author who donated all proceeds from her books to Concern Worldwide was one of two Tipp women awarded for their incredible campaign work at the recent Concern Volunteer Awards.

Betty Lynch (77) from Tipperary Town – who has four children and five grandchildren - is well known to church-goers who see her and her team collecting donations outside church gates for Concern, Ireland’s largest humanitarian aid agency.

The fundraising stalwart is also a popular contributor to Tipperary Mid-West Radio where she speaks about Concern’s development and emergency response work around the world.

Betty has published several poetry books to raise funds – the first in 1993 during massive displacement in Sudan when she gave Concern the IR£5,500 proceeds she received from her first publication.

She then gave the IR£4,500 made from another book in 1994 in response to the genocide in Rwanda – a country where Concern remains and does crucial work for refugees fleeing conflict in the neighbouring Burundi.

Betty and her group of volunteers – who include members of her choir The Tipperary Singers – have raised an astonishing €73,675 for Concern since 1993. And she hopes to raise thousands more funds from a new poetry collection she is currently working on.

Her efforts were recently acknowledged by the hugely grateful Concern chairperson Tom Shipsey and chief executive Dominic MacSorley, who presented her with the ‘Outstanding Commitment Award’ at the Concern Volunteer Awards.

Speaking after the event in Dublin, Betty thanked her fellow volunteers and the people of Tipperary for their generosity despite many local economic hardships. She said: “I am very moved and humbled to have received the award and would like to thank the people of Tipperary for their extreme generosity. It’s such a privilege to do some little thing to help. It is only a small little thing.”

Referring to the ongoing crisis in Syria – where 4.5 million people have fled conflict – she said a poem she wrote about the Bosnian crisis in 1994 could also be about the current turmoil in the Middle East. Betty added: “I found one of my poems on Bosnia and realised that I could actually just change the title and one or two lines and the same poem would be about Syria today. It was providential.”

She praised Concern for their work in Srebrenica and in Kosovo during that conflict – when thousands were killed and displaced in acts of genocide and ethnic cleansing – and for their ongoing humanitarian aid efforts around the world.

Another Tipp-woman - retired mum-of-three Mary Anne Fogarty from Templemore - won the Concern Debates award, recognising her work in schools to help promote a better understanding of poverty and justice issues.

She has mentored the Thurles Presentation Secondary School debates team for many years and adjudicated other debates. Mary Anne has watched on from the sidelines as the Presentation teams collected many trophies in debating competitions - but this was her turn to receive a prize.

She said after the ceremony: “Concern always has the ability to get in where the need is greatest and look after it. “I was with Concern in Haiti and they really get involved with small vital projects, like installing water taps somewhere and [providing] a small maternity hospital.”

Mary Anne praised the students in her debating teams and explained what they get from taking part, adding: “It is the communication skills they get too and the confidence.”

The awards, now in their third year, celebrate the vital contributions made by Concern’s 1,600 volunteers – who ensure funds are there for people living in extreme poverty in countries like Syria, Sudan, Chad and Niger. Speaking at the awards presentation ceremony, Concern Chief Executive, Dominic MacSorley said: “The importance of volunteering cannot be overstated in the history of Concern as we simply would not be here today without the input of volunteers.

“Many of our volunteers support Concern in ways that may only be known to a small number of people.

“It’s not always the most glamorous task to be organising collections on cold winter days or sitting in school halls adjudicating debates but we just could not connect with the public without your input and the fruits of your labour can be seen in the strong support that Concern enjoys.

Anyone who wants to volunteer to help raise much-needed funds for Concern can text the word SUPPORT to 51772.