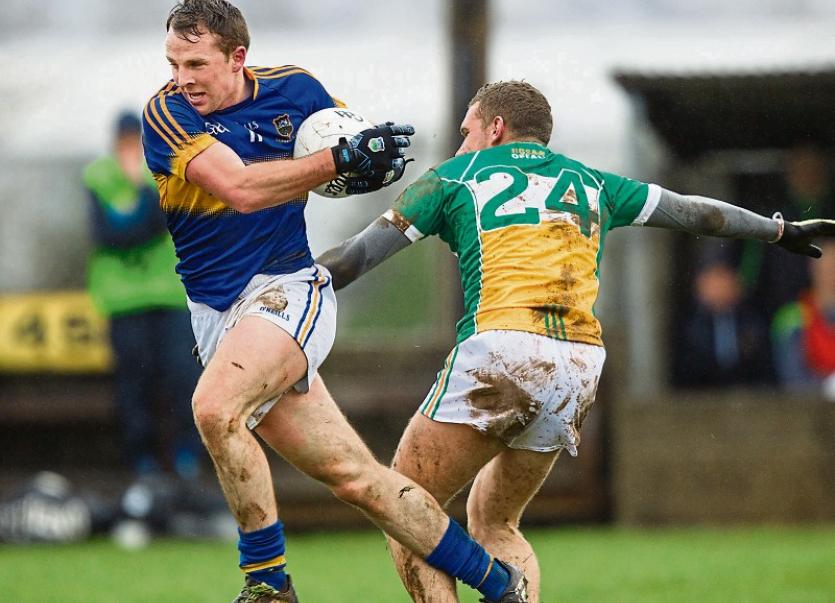 The groundwork for Sunday’s win was laid in an impressive first half in which two goals for the home side, scored by Michael Quinlivan and Martin Dunne, ensured a nine points lead at the interval. At no stage thereafter were Tipperary under any serious threat of relinquishing such an advantage.

At this stage of the league with four games played and three to come, against Longford (away), Kildare (home) and Sligo (away), Liam Kearns’ side are in the driving seat to secure one of the two promotion spots for football at a higher tier in Division 2 come next spring.

On Sunday last at a very heavy Sean Treacy Park, Tipp produced by far their best display of their campaign to date in what was expected to be a far closer contest that what transpired. Following a fairly even first 10 minutes or so, after which the home side led 0-2 to 0-1, Tipp put in a storming burst and yielded 2-4 without reply between the 10th and 20th minutes.

The first goal was well finished by Michael Quinlivan on the edge of the square following a ball played in by Jimmy Feehan; the Clonmel Commercials full-forward beating defender and goalie to fist home the goal.

Three points in quick succession from a lively Conor Sweeney (two from frees) stretched the lead to 1-4 to 0-2 before Sweeney set up midfielder Martin Dunne and the Moyle Rovers man buried his goal chance with aplomb.

A minute earlier a fine move started by Jimmy Feehan linked up Peter Acheson and Philip Austin to present Brian Fox with a great goal chance which went just wide off the post. Tipperary could have been even more comfortably ahead at the break than the 2-8 to 0-5 lead they did enjoy.

Credit in the first half to a dominant midfield pairing of Alan Moloney and Martin Dunne under the kick-out, and to Robbie Kiely and Peter Acheson for link-up play.

The visitors started the second half much better and three early points from play inside six minutes, two from the talented Niall McNamee, gave ‘The Faithful’ hope. However the scoring dried up after that - they wouldn’t score again until the 61st minute with their last four points all coming from frees.

Tipperary only added three points themselves in the whole of the second period, two frees from Quinlivan and a point from Sweeney.

Tipperary took the opportunity - with one eye on the Kerry under 21 game on Wednesday - to introduce all six substitutes. Offaly manager, Pat Flanagan did likewise , but the visitors were never going to deny Tipp the league points which have effectively guaranteed their place in Division 3 and also keep the drive for promotion very much alive as Tipperary head for Longford on Sunday next.