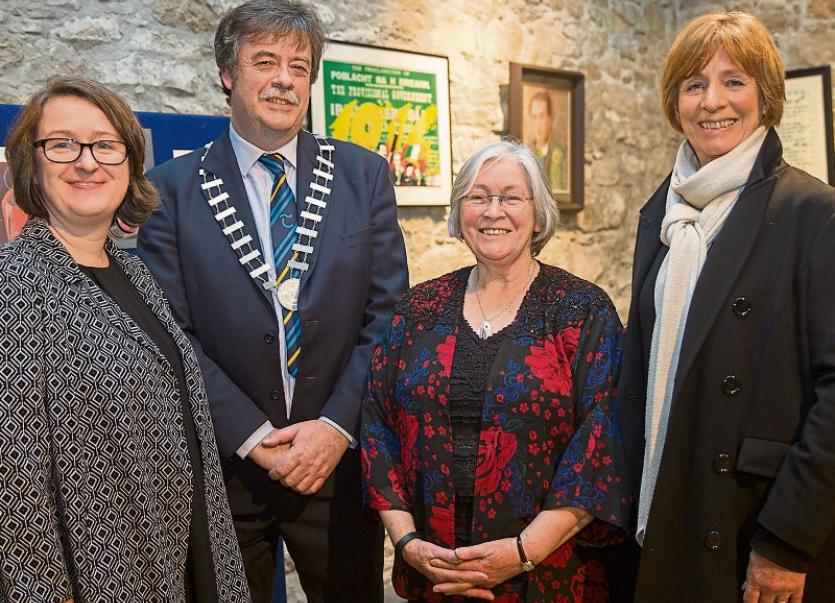 As we draw closer to Easter Sunday on 27th March, events commemorating the 1916 Rising are increasingly taking centre stage as the nation remembers the insurrection of 100 years ago.

Locally on Wednesday evening last South Tipperary Arts Centre (STAC) launched their “1916 in Print” exhibition at the Main Guard which showcases in visual form a wide ranging selection of 1916 memorabilia, mostly of a Tipperary relevance.

On display for the duration of the exhibition which will run right throughout the month of March to its conclusion on Easter Saturday (26th) are a range of paintings, prints, photographs, drawings, calligraphic works, poetry, etc.,of 1916 interest, with many by local artists.

Also on display in the fabulous Main Guard exhibition hall are memorabilia of the Rising, books, cuttings, etc. of national but mostly local interest which the seriously interested or the casual browser will enjoy.

Maureen Purcell, in her welcoming words to those present praised the ongoing support of the local council in all the endeavours of STAC over the past 20 years and thanked everyone for their efforts in supplying exhibits and those involved in the actual construction of the exhibition itself. She also announced that more exhibits would be added to the display over the coming days and weeks and there was plenty of interesting items to view from the wide display.

The gathering was also entertained with two poign-antly delivered poems by Mary Burke (Padraig Pearse’s ‘The Mother’ and also ‘The Sacred Fire’ by Dora Sigerson Shorter) and by some traditional Irish music from Emma Lacey and Clodagh Kelly. Local poet John Fitzgerald also read from his poem about the seven signatories of the Proclamation.

The exhibition should prove popular with everyone, young and old, with an interest in the history of the period and particularly in how it is expressed in visual form. It will be of great interest also to primary and secondary school students. It runs until 26th March.