It's an exciting 'dog's life' for Nathan and Autumn! 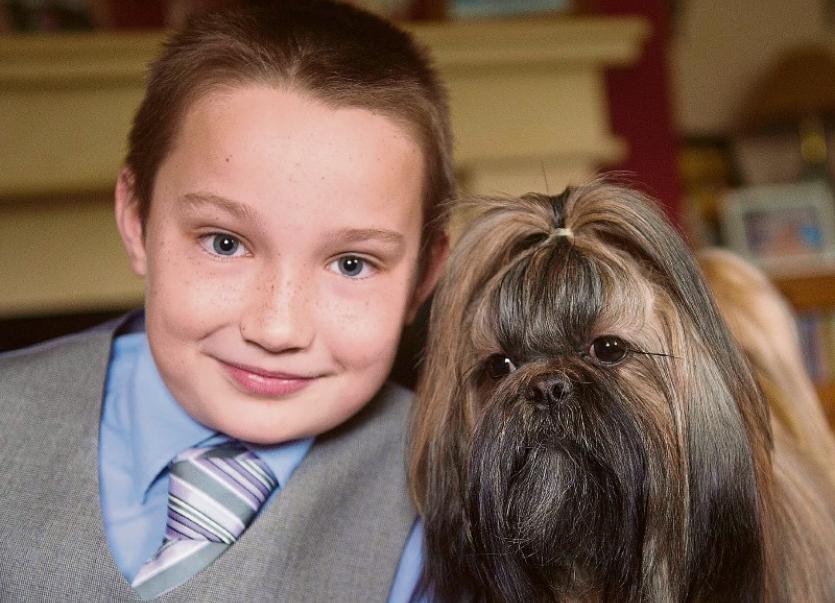 They say a dog is a man's best friend, well this week a young Tipperary man and his devoted dog will be making their mark together at one of the world's most famous dog shows.

Ten year old Nathan Quinn, from Ballyduggan, Mullinahone, and his 16-month old Shih Tzu 'Autumn' are taking to the show ring at Crufts, the world's largest dog show, in the Yearling Class on Thursday, March 10 - where he will the youngest Irish competitor this year.

Nathan and Autumn will be up against the 'creme de la creme' of the canine world, but they are just excited to be taking part in such a prestigious event and plan to do their best and have fun.

Nathan may be young, but no less than international judges have already remarked to his parents that he is 'a natural' and adults who show dogs could learn a thing or two from him!

Growing up in an animal -loving home it was inevitable Nathan would also want his own pet. Parents Oonagh and Peter show dogs - Peter a Beagle and Oonagh Shih Tzus. The family also have a black labrador rescue dog.

Oonagh began showing her dogs about five years ago and bred a litter last year from her prize winning pair. Nathan was with her at shows from the start at by the age of six was asking when he could start showing his own dog. He picked a puppy from that litter and started taking her to shows. He had never shown or handled in competition before but he just 'took off,' Oonagh told The Nationalist, and he started winning.

Last September Nathan and Autumn qualified for Crufts at a show in Belfast.

As it is the dog that is competing and not their human, Nathan can be in the show ring with adults of all ages. There is a separate 'junior handling' competition for younger dog owners but for now Nathan just wants to concentrate on Autumn and showing her, without the focus on himself.

Autumn, or to give her her full registered name 'Shiawase Dreams of Natalie,' is named in honour of Nathan's big sister Natalie who passed away almost ten years ago. She always wanted to be a vet an d loved dogs too. She was a volunteer with Paws in Mullinahone. Oonagh and Peter got into showing their dogs almost as a therapy after her tragic death in a road accident. She will be in all their thoughts especially on this special family occassion.

Oonagh said Nathan is a sensitive little guy who loves his dog and is eager to learn and is good to take advice from experienced competitors. He helps with feeding, grooming and cleaning the kennels at home. “He loves that little dog and she trusts him,” Oonagh described them. She's his pet first and then a show dog. Shows are “a family day out with the dogs, if we win it's a bonus.”

Oonagh's own Shuh Tzus have 'qualified for life' for the show but this year they are just taking Autumn and concentrating on Nathan.

She said Crufts will be a big change to what they are used to, and a bit daunting, for Nathan but “as far as he is concerned he is taking home the best dog.”