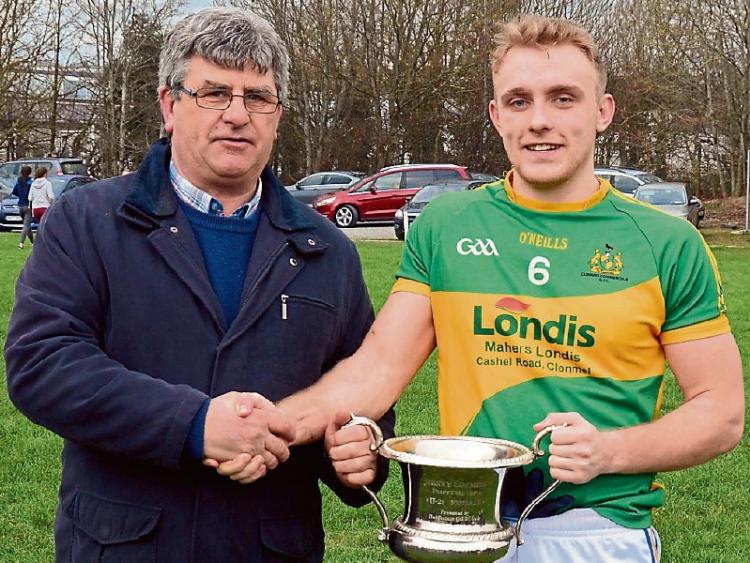 Clonmel Commercials’ bid for a three-in-a-row of County Under 21 ‘A’ football titles remains on track following their South final win over Moyle Rovers.

At Ned Hall Park on Saturday last, in a repeat of last year’s decider, the champions withstood the challenge of arch-rivals Moyle Rovers to complete a first ever hat-trick of divisional titles at this grade.

The two key moments of the game came just before the break and again in a four-minute spell towards the end of the second half.

As half-time approached and with the challengers leading 0-5 to 0-4, a slick move through the Rovers defence involving Jack Kennedy, Ross Peters, Paudie White and Richie Gunne was finished to the net by team captain Kevin Fahey. The goal gave Commercials a crucial lead and also a huge psychological boost at the interval.

The first three points of the game were all frees; Rovers with two from Stephen Quirke were leading 0-2 to 0-1 after 10 minutes, Paudie White replying for Clonmel Commercials.

Quirke then kicked the game’s first point from play and on 15 minutes after Ross Mulcahy was fouled Rovers had the chance to go 0-4 to 0-1 up but a ‘handy’ free went wide of the upright.

A point from Michael O’Reilly on 20 minutes and another fine effort from Paudie White levelled matters for the first time five minutes before the break.

A softly-conceded free allowed Quirke to inch Rovers ahead in the 29th minute but the game’s only goal followed in added time. A five-man Commercials move was well finished by Kevin Fahey for the half-time lead, 1-4 to 0-5.

A point from Moyle Rovers’ Brian Norris shortly after his introduction was the only score from either side in the third quarter as the game tightened considerably. When Rovers’ Stephen Quirke equalised with yet another free on 46 minutes a grandstand finish looked on.

However, as if sensing real danger, Clonmel Commercials quickly upped a gear to exert their superiority and four points in a row between the 48th and 52nd minute proved match-winning.

Ryan Lambe, within three minutes of coming on, kicked a fine point from 30 metres for the lead; quickly followed by Paudie White (free), Kyle Peters and Calvin Boland, as the stronger finishing Commercials took a command they would not relinquish.

Late on Quirke added his sixth free of the day but the ever ubiquitous Padraic Looram got on the end of a Ryan Lambe pass to wrap up another Commercials win.

No doubt the better team won on the day with their forward line in particular having far more options than the the challengers. In defence Sean Gunne, Liam Ryan and the whole half-back line stood out. Jack Kennedy and Padraic Looram impressed in the centre with Ross Peters and Michael O’Reilly always available for ball up front.

Rovers will be devastated at another final defeat to Commercials. They gave their best shot on the day but came up short. Sean Murphy, Tadhg Fitzgerald and Morgan Irwin held their own in defence with David Roberts, Dara Ryan and Stephen Quirke carrying the workload up front. An overdependence on frees and just two points from play over the hour was never going to be enough to dethrone Commercials.

Footnote: In this game Commercials captain Kevin Fahey was playing in his third competitive fixture in seven days: (1) v Offaly in Tipperary Town for Tipp seniors; (2) v Kerry in Tralee for Tipp u/21s; (3) v Moyle Rovers in Clonmel for his club. He also came on as a sub on Sunday last for Tipp seniors v Longford in Longford - a fourth game in eight days! And we are forever hearing talk about player welfare and burn-out. But is anyone really listening?