Pat Flynn is Cashel Person of the Year 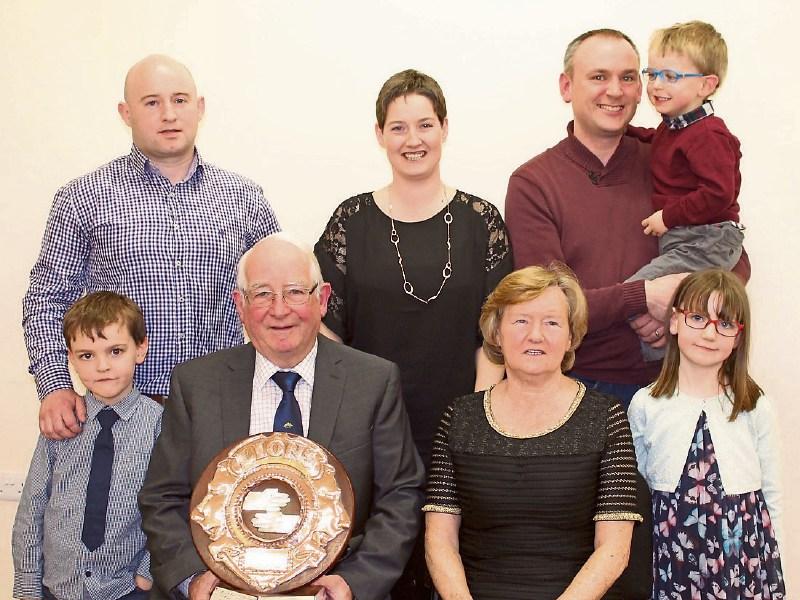 Pat Flynn, a retired Cashel businessman and well-known for his involvement in the community was named Cashel Person of the Year for 2015 last week.

The award, organised by Cashel Lions Club since 1987, is the greatest honour that can be bestowed on anyone in the community as it identifies and recognises the person who has contributed significantly to the life of the people in Cashel and District during the previous year.

It’s a very coveted award and its popularity is reflected in the number of nominations – seven in all - for this year’s honour. Pat was nominated by Una O’Donoghue, who saw in him, as she said at the presentation, ‘a decent human being who was forever contributing in some way to the betterment of the community. He brought humour and pleasantness to his work and there was nobody more deserving of the award.’ Una’s son, Pat, added his reasons why Pat was so deserving. According to him his contribution went back a long way, as a shopkeeper, for his work with Cashel Rugby Club, for meals on Wheels and latterly for his work with Tidy Towns. ‘Pat was at the centre of everything. He was a busy man, always ready to get busier,’ he concluded. Paddy O’Leary stated he knew Pat since the sixties. He remembered him for his work in the Chamber of Commerce. He was highly respected for what he did, which he did quietly and in the background. Paddy Downey praised his work with the Tidy Towns. He stated that he was involved as long ago as the 80's and he remembered him with Ned Thornton planting flowers on the Golden Road, when there were very few people involved. The presentation of the award, which took place in Halla na Feile on Tuesday night, was made by Councillor Louise McLoughlin. She congratulated Pat on winning the award. She recognised the dedication and passion he brought to the many groups and organisations he contributed to and concluded by saying it was a privilege to present him with his trophy. At the beginning of the proceedings Lions President, Marie Gayson, welcomed everyone to the event. She was very happy with the choice of Pat for the award. He was a person who did a huge amount, much of it anonymously, for the benefit of the community and he did it all without any expectation of reward.