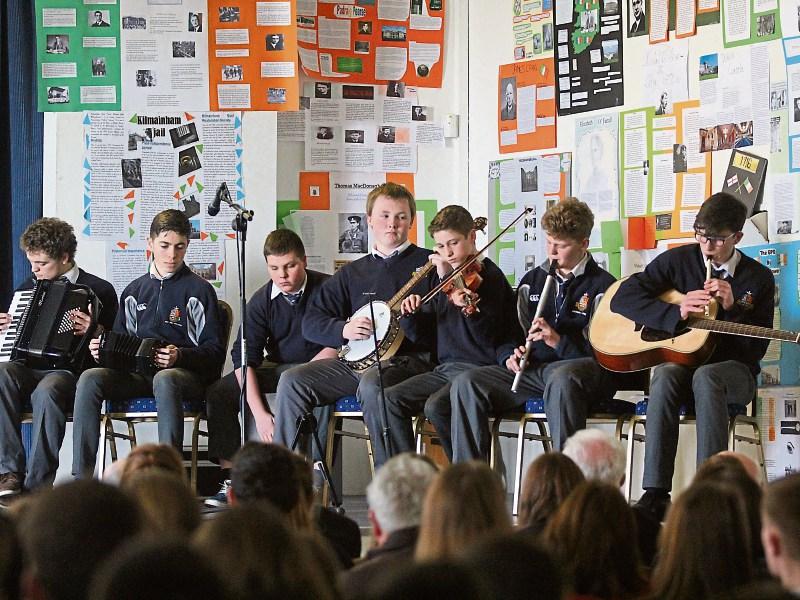 Commemoration of Easter Week 1916 has become a pre-occupation throughout this centenary year.

Historical connections with the events of 1916 are amassing in all parts of Ireland and beyond.

Rockwell College, New Inn, Co. Tipperary is one such place that shares a very strong link to the 1916 Rising. Two Commandants and a number of insurgents have a place in the annals of Rockwell College.

Thomas MacDonagh, executed on the 3rd of May 1916 was one of the seven that signed the Proclamation of the Irish Republic. MacDonagh was Commandant of the 2nd Dublin Brigade at Jacobs Factory. Born in Cloughjordan, Co. Tipperary in 1878, MacDonagh arrived in Rockwell College in 1892 after the death of his father. He was described as a ‘small, sturdy built boy with curly brown hair and large grey eyes’. He also had a ‘mischievous humour and a love of ghost stories’.

He spent nine years at Rockwell, four years studying as a student, and five years showing an inclination to the priesthood, applying to join the Holy Ghost order in 1900. While at Rockwell, MacDonagh taught English and Latin, and was inspired to reflect on his poetry and romantic nature.

Consequently, he wrote several poems during this time of his life, including ‘In Festo Sancto Spiritus Ad Sanctum Spiritum’ and ‘The Sea’. Despite leaving the College in 1901 to pursue a career in teaching, he continued to write poetry and prose. His volume of work is large and shows a man of great sympathy, Love and Nationalism. Eamonn De Valera, Commandant at Boland’s Mills during Easter Week 1916, arrived at Rockwell in 1903 as a teacher of Mathematics and Physics.

In his single year in Rockwell he was part of the boarding college staff and in his position got to know College and the surrounding area very well. He was a part of the college orchestra and was seen locally in and around Cashel. In the aftermath of the Rising De Valera was initially sentenced to be executed, but for various reasons, the sentence was commuted to life in prison. De Valera went on to have an extremely illustrious political career and despite being seen as a controversial and divisive figure, no one can deny his impact on Irish history. De Valera never forgot Rockwell College and often paid a visit throughout his career, some expected, others unexpected. A surprise visit by De Valera in 1922 raised tensions in the college. On St. Patrick’s Day that year a convoy arrived in the gates of the College containing De Valera, Cathal Brugha, Sean Macbride and Joe MacDonagh, brother of Thomas. They were proceeding to Kilkenny for an anti-Treaty rally and wanted to remain the night. To make matters worse, at the same time, a state of Martial Law had been imposed on the area by the Free State army. Other visits to the College by De Valera were more ceremonial. In 1941 he presented Rockwell with the award in promoting the Irish Language as he was both Taoiseach and Minister for Education at the time. In 1964, De Valera, as President of Ireland, arrived for the Centenary celebrations of the College.Other past members of the College who had a connection with Easter Week 1916 were Eamonn Dore, of Glin Co. Limerick. Dore was a student in Rockwell from 1912 to 1914. He was Sean Macdiarmada’s personal bodyguard during the Rising. In the immediate aftermath of the rebellion, Seamus O’Neill, an Irish teacher at the College, was arrested by the British Army in a round-up of suspects. Initially held in Cork prison he was later sent to Lewes gaol, eventually to be released on a pardon sometime later.