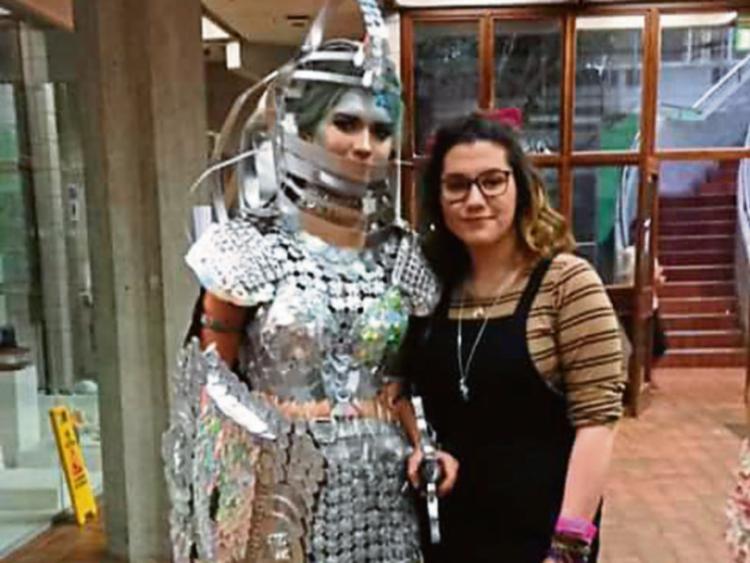 A busy Leaving Cert student at the Presentation Secondary School in Clonmel has found the time to design a costume that has reached the All-Ireland Final of the Junk Kouture recycled fashion competition.

The Silver Slayer entry that has been designed, sourced and created by Jamie Caron will proudly take its place at the All-Ireland final, which will be held at Dublin's 3Arena on Thursday April 14.

Jamie's costume is made from 2,000 recycled bottle caps from a local nightclub, flattened, drilled and hand-stitched together with cobbler’s thread; recycled exam CDs softened, cut and shaped; 500 can pull tops from the school canteen; scrap metal from a local junk yard and recycled leather belts.

Accessorised with a shield and sword, this Silver Slayer is ready to do battle on the catwalk.

Jamie was inspired by the idea of female power and the strong independent nature of women.

"I took my inspiration from the image of the armour from Game of Thrones drawings and animations of knights, which most, I found, if not all were of men. I wanted to reinvent the look of armour in a modern, fashionable way and in a way that suited and fitted a woman's body, while also still having a powerful warrior-like feel to it. And so Silver Slayer was born".

As well as studying for her Leaving Cert, Jamie is also preparing a portfolio for the Limerick School of Art and Design and hopes to pursue her dream to study in Limerick next September.

Silver Slayer is modelled by six feet one inch-tall Transition Year student Clara Schubert from Germany, who is spending a year at the Presentation in Clonmel to improve her English. Little did she imagine when she arrived in Ireland that she would be performing on stage at the 3 Arena in Dublin at a national final.

Clara's make-up and hair design is by Andrea Carroll, a 5th Year student who has ambitions to become a professional make-up artist.

70 supporters from the Presentation, including Jamie’s art teacher Mairead Magnier Fennell, will make the journey to Dublin to watch and support Silver Slayer in the final.

The online vote, which counts as 10% of the overall mark, is now open on sponsors Bank of Ireland's Facebook page and closes at midnight on Friday April 8.

This year’s prizes include €2,500 cash for the school, €500 cash and iPad minis for the winning team, as well as a scholarship with the Limerick School of Art and Design. Bank of Ireland is again sponsoring the Glamour Prize, where two outfits and their models will be chosen to attend The Royal Film Premiere in London later in the year.

Jamie Caron is following in the footsteps of the great success of previous All-Ireland finalist costumes from the Presentation in Clonmel, including All-Ireland winner Grainne Wilson and Emma Clancy.

Grainne is currently studying fashion design in the Limerick School of Art and Design.

Junk Kouture has established itself as the premier recycled fashion competition for teenagers throughout Ireland and Northern Ireland.

It encourages young designers in second level education to create striking couture designs and impressive works of wearable art from everyday junk that would normally find its way into the bin.

Junk Kouture aims to inspire and ignite passion in these teenagers, while at the same time subtly educating them about the importance of recycling and reusing waste.