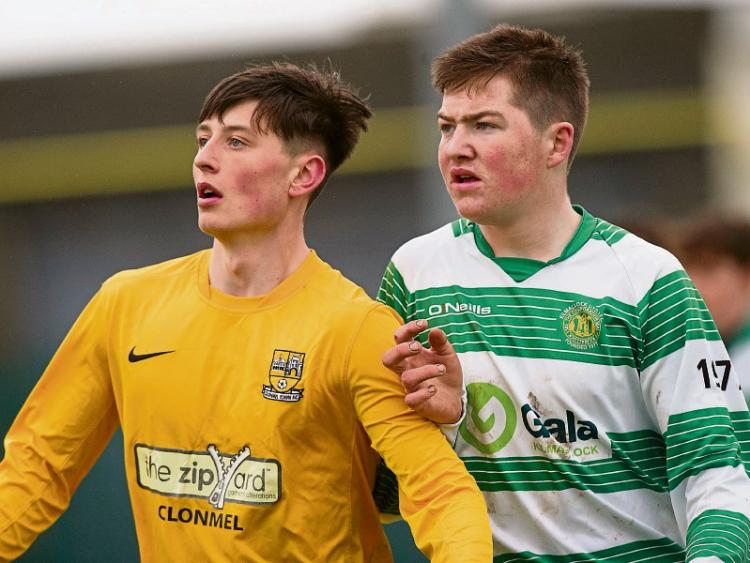 The two form teams in the Third Division and who’ve had little between them in games already this year, played out another close affair on Sunday when it took extra time before they could be separated and Mullinahone moved on to the Peter O’Reilly Cup final.

Early on it was the home side that made the running with Pa Ryan strike from distance hitting the post, but as the game settled down it became a battle in the middle of the field with both sides creating chances and playing attacking football.

In the second half both teams had chances again but no one could take the initiative and put their team through to the final, so extra time it came down to. Ashley Laslett finally put the visitors into the lead with a good strike just inside the area on 92 minutes, but before half-time Burncourt got level with James Mulcahy scoring with a header from eight yards out.

In the second period the home team pushed on for the winner but half way through a promising attack broke down and the visitors countered brilliantly with Kevin Walzer scoring with a strike from sixteen yards out to give his side their spot in the final.

Local rivals Killenaule and Killusty went head to head in this semi-final last Sunday and although the home side put up a strong resistance early on, eventually the winning side pushed on to an easy win and a place in this year’s Cup final.

The home side started weel and were ahead inside five minutes when Paul Webster opened the scoring with a fierce shot from just inside the area.

Killusty hit back quickly though and minutes later were back on level terms when Eoin Fogarty beat the offside trap and slotted home. Webster restored his side’s lead in the 25th minute but a minute later almost straight from the kick off Killusty were again back on terms this time with a goal from Ciaran O’Meara. The visitors finally took the lead for the first time three minutes before the break when Colm Coen rolled back the years and scored from close in, and the same player stretched his side’s lead on the hour mark with another well taken effort. When Dylan Gayson hit a fifth for Killusty 15 minutes from time the home side more or less threw in the towel and left the visitors to look forward to a Cup final in a few weeks’ time.