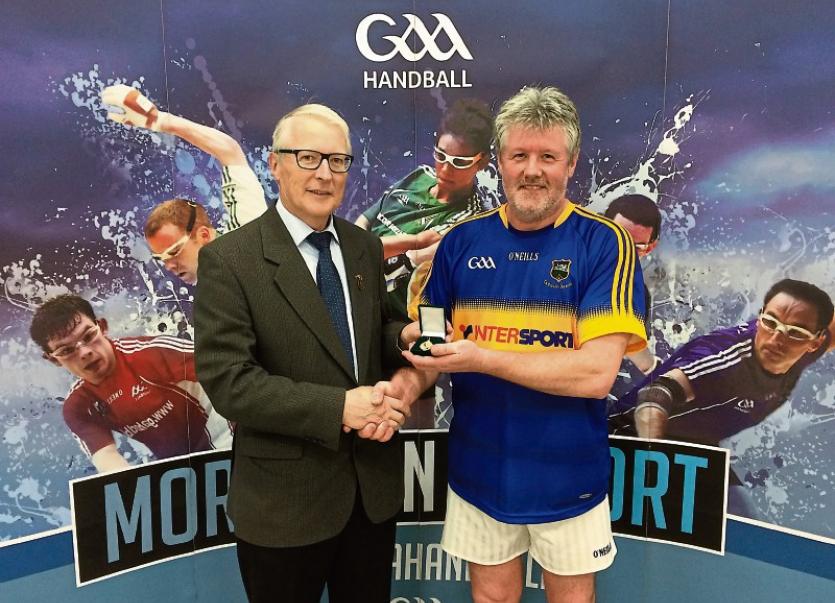 Pictured above: Billy Mullins, Clonmel Handball Club receiving his All-Ireland medal from Willie Roche, President of the Irish Handball Council, on the occasion of winning the Diamond Masters B Singles 40x20 All-Ireland title in Kingscourt, Co. Cavan. He defeated Columbia Holleran of Mayo 21-14, 21-8.

At Emly at 18:00 Emly V Ballylooby/Castlegrace

West Tipperary U21 A Football Final

South Under 21 'B' Football Championship

County Board Draw on Friday night

Our social for the "65 u-15 Sth. Hurling Champions was a great night and very well supported. Thanks to all who helped in any way, a special thanks to the organising committee of Michael Mackey, Patsy Hartigan, Keith Delahunty, Anthony Lonergan and Jerry Kelly .

Membership is now due, has to be in by March 31st.

There was no U8 training on Tuesday night, 29th March but tTraining as usual on this Friday at 7pm.

Tennis coaching Saturday morning in Monroe from 10am to 11am. Ages 6 to 12 years. All are welcome.

Reminder that membership now due.

Following a draw against Emily last Sunday week , our next outing will be away to Cahir next Saturday evening - 2nd April . A good result here will set us up nicely . Throw-in - 6pm. All support appreciated.

We sent a sincere best wishes to Noreen and John Donoghue who celebrated 40 years of marriage. Noreen has dedicated and still dedicates hours of time - not only to Clonmel Óg but to several organisations in the town. Along with the likes of Cora, Aidan, Stephen and Susan, Noreen keeps the Clonmel Óg lotto show on the road. The lotto is the lifeblood of the club and we are very fortunate to have folks like Noreen who altrustically give up their time to support this.

Our under 10 boys will be travelling to Rockwell next Saturday - 2nd April - for a football blitz. Blitz's are great fun activities for the kids and a great opportunity for parents to show encouragement and praise for the boys efforts and hard work. Details , along with Thursday training will go out by text in usual manner.

Our first team boys lost out to a very good Kilsheelan side last Friday evening in Ned Hall Park. We played into a strong wind in the first half and this allowed Kilsheelan build up a good lead that we couldn't peg back in the second half. What was good to see is that heads didn't go down and we got the last two scores - points from a free and from play.

Next game will be 6th April, away to Moyle Rovers.

By the time you read this , we will know the outcome of last Monday evenings (28th March) game v Arravale Rovers. The result here will determine our fate at semi-final stage. So far, the girls have had to dig deep to earn draws against Clerihan and St Pat's. Whatever the outcome on 28th , Johnny Cagney and Mark Gregory must be commended for the great work they have done with this team.

Under 10's - training will continue every Saturday morning at 10:30 and Thursday's at 6pm at the field. (Aim will be to train at hurling on Thursdays and football on Saturdays , though blitz's will dictate, all training sessions will be notified to parents via out text.)

Under 6's - expect to switch to field this week , expect text to confirm.

As always new members will be most welcome to come along.

One Final Push! Membership renewal is now due by 31st March. For juveniles, mentors have already handed out forms and forms are also available every Saturday morning at the dressing rooms.

We have a number of upcoming "Bag packs" to generate revenue required to keep club wheels turning. The first is happening 2nd April - Dunnes , Oakville and Super Valu , Poppyfields. Slots are of 2-hour duration . If you can help text 0879311876 or email susancolman@live.ie with your details .

Thanks for your continued support.

A full house is expected in the Centre on Saturday evening next for the Commemorative Concert Celebrating the Songs and Music of 1916. The organising Committee has put together an excellent programme and tickets for the event are in keen demand.

The subscription is €10 and seats may be booked from both Marian’s Bookshop and Premier Music in O’Connell Street, Clonmel. The Concert will be followed by music in the bar and all are welcome.

Arrangements are in train to officially open our Patron's Corner in mid April and the Centre Committee is now making a final appeal to intending Patrons. The specially designed Commemorative Gallery will be an impressive feature of the Main Hall and the proposal has the potential to provide a unique and permanent snap shot of South Tipperary History embracing our clubs, players, administrators, officials and supporters who have served the Division loyally since the foundation of the South Board in 1907.

The subscription is €100 and further details are available from any South Board member.