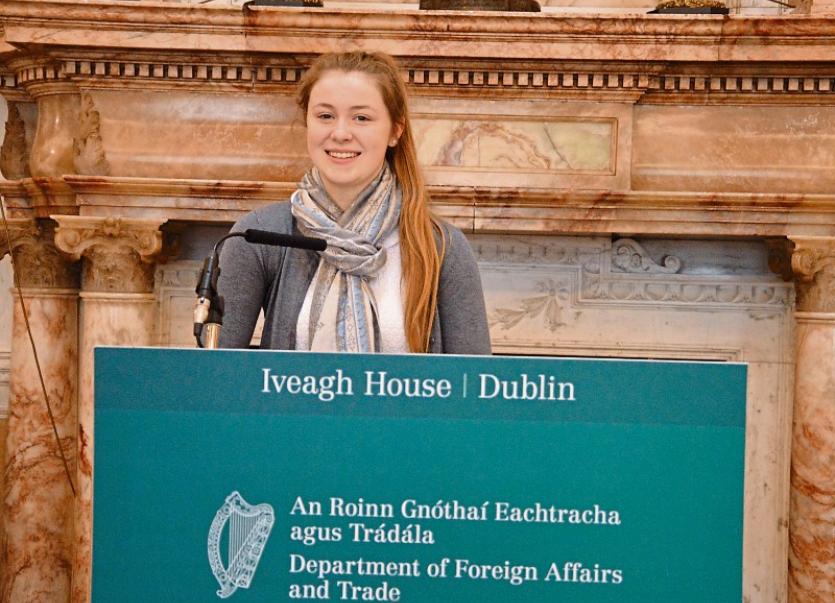 A transition year student from the Presentation Secondary School in Thurles has been selected to join 32 other students from across the country as part of the Iveagh Scholars programme set out by the Department of Foreign Affairs.

Sixteen year old Avril Hogan was selected by an independent panel of judges for her essay on ‘Honouring the Past, Imagining the Future’ and will now spend a week at the Department of Foreigh Affairs where she will take part in mock press conferences, attend seminars and visit other foreign embassies in the capital as well as a trip to Northern Ireland to learn about Anglo-Irish relations.

Avril's award winning essay covered topics such as the 1916 Centenary as well as Ireland's ascension into the UN. The talented hockey player, who lives in Carrick-on-Suir with her parents John and Linda, is a boarder at the Presentation while her younger brother attends Rockwell College.

“My TY coordinator told me about the competition so I started researching lots of different areas and I was delighted to hear I had been chosen.” However this isn't the first winning essay the TY student has composed having recently scooped a top award from Thurles Citizens Information for her composition on their 40th anniversary in the town.

And while Avril has already marked herself out as a talented writer she says she is unsure of any future career ideas but her week as an honourary diplomat may influence her choices.

“I think it would be a very interesting career to have and I'm looking forward to learning more about the work so you never know,” she says.

The Iveagh Scholars Programme is now in its second year and aims toeducate secondary schools students about the work of the Department and international affairs.