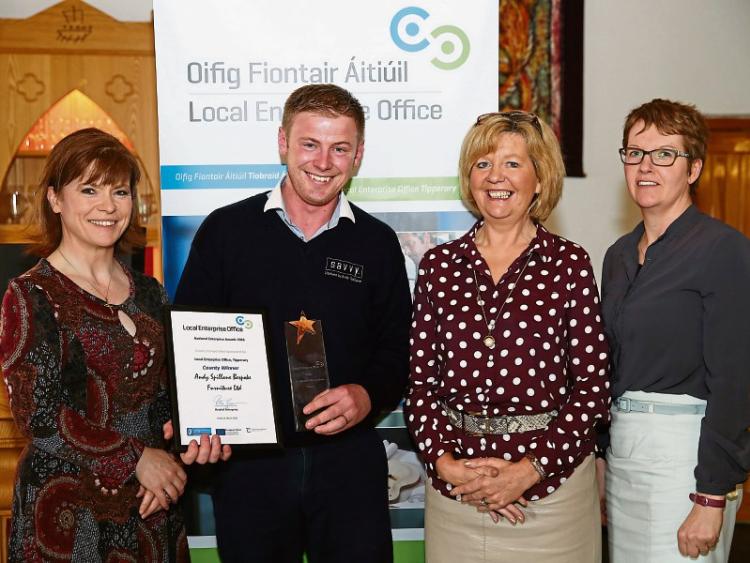 A return to traditional forms of enterprise and strong contenders in the agri-food business were some of the heavy hitters at the second annual county wide Enterprise Competition last Friday which saw Thurles based Savvy Kitchens claim the top spot and a place at the national final in June.

Borrisoleigh’s Andy Spillane from Savvy Kitchens took the top spot in the competition with a prize pot of €1,500 and a place at the regional final where he will go up against entrants from Clare, Limerick and Kerry.

The qualified cabinet maker began his company 'Andy Spillane Bespoke Furniture Ltd' in 2007 and fought hard throughout the recession building a strong client base. In 2010 the company was able to undergo a complete rebranding and rehaul of its Thurles based showroom going on to become one of Munster's leading kitchen retailers employing 14 people. More recently the company has also benefited from exposure through appearances on RTE series Room to Improve.

“Delighted, wasn’t expecting it to be honest,” said Managing Director Andy Spillane. “We're very thankful to our customers and to the judges for selecting us to represent Tipperary in the next stage of the competition.”

The winners were selected from a shortlist of 14 finalists present on the day who are estimated to provide up to 100 jobs in the county between them.

The judging panel were keen to note a return to traditional forms of enterprise and the agri-food sector as strong performers in the competition. Tourism, agri- tech industries, steel fabrication, engineering and security solutions companies were also recognised at the final having also been shortlisted.

Also recognised by the judging panel was Robert Tormey from Lisduff Fine Foods who collected a well deserved runner-up award for his specialist pork processing company.

This innovative food business has been in operation since 2012 at the company's processing plant in Rearcross. No stranger to awards, the company was twice recognised at the Great Taste Awards in London for both their marinated roast-in-bag bacon and black and white puddings ranges which achieved Gold Star status in 2013. Last year fourth generation butcher Robert was also joined by his brother Mike and Seamus Hegarty who came on board with the company.

Third place went to Sinead and Jack O'Dwyer of Pressure Welding Manufacturing Ltd. which has been operating in Thurles since 1980. The company offers high quality stainless steel products and mechanical engineering services for pharmaceutical, beverage, food and semi-conductor industries. The company was also one of the first in Ireland to provide specilaised orbital welding.

This is the latest in a series of awards for Chief Operations Manager Sinead having taken home the best established business category title at Ireland's Best Young Entrepreneur competition last year where she received an investment of €20,000 towards expanding her engineering business. Additionally the former UCC student was also named as Tipp's Best Young Entrepeneur for 2015.

Also picking up an award on the day was Eavaun Carmody from Killenure Dexter Gourmet who received recognition for her work with the premium cattle breed and utilisation of the entire animal and its bi-products.

Eavaun collected an award for 'Excellence in material innovation' having been the first to sell the indigenous Dundrum Dexter beef commercially and will soon be launching a luxury leather range as well as a charcuterie range with promoter La Rousse.

DMA Foods Ltd run by Clogheen native Denis McCarthy picked up a special award for innovation for his range of low calorie potato and vegetable crisps.