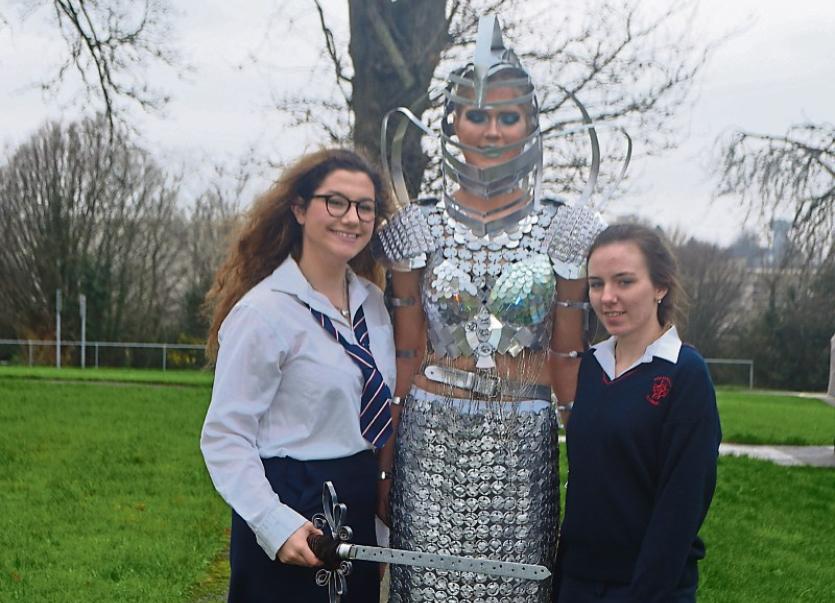 Students from four schools will represent the Premier County at the upcoming Junk Kouture grand final in the 3Arena, Dublin, on Thursday, April 14.

80 designs from across the country will compete for a top prize of €2,500 for their school, iPad Minis and €500 cash for the team.

Students could also win the chance to walk the red carpet at the Royal Film Premiere in London or even get a Limerick School of Art and Design (LSAD) scholarship to cover their fees at the college for one full year of study.

Each of the grand finalists will be adjudicated by model and DJ Vogue Williams, stylist and TV presenter Rob Condon, design educator at LSAD Dr. Tracy Fahey, Vogue India’s Lorna McGee, and not forgetting the one and only Louis Walsh.

In addition to 80 of Ireland’s finest junk designers showcasing their work with entertaining catwalk performances, a host of special guests will be in attendance. Warm up will be provided by the native Irish singing band Seo Linn, who are well known for their take on Avicii’s hit ‘Wake Me Up’, before Louis Walsh’s new up and coming six piece boyband Hometown perform their hit songs ‘Where I Belong’ and ‘Cry for Help’.

Representing the Presentation, Clonmel, is ‘Silver Slayer’, the invention of Leaving Certificate student Jamie Caron. Jamie spent five months designing, sourcing and creating the costume in conjunction with preparing a portfolio for the LSAD.

The costume is made from 2,000 recycled bottle caps from a local nightclub, flattened, drilled and hand stitched together with cobbler's thread; recycled exam CDs softened, cut and shaped; 500 can pull tops from the school canteen; scrap metal from a local junkyard and recycled leather belts.

“My costume is 100% recycled, and I took inspiration from the idea of female power and the strong independent nature of women. I researched images of old medieval knights and armor from the popular show Game of Thrones, creating armor in a modern fashionable way while also flattering and fitting to a woman's body,” Jamie explains.

Jamie says it was an “amazing experience” seeing the costume on stage at the University Concert Hall in Limerick for the southern regional final and that it’s a “once in a lifetime” opportunity to represent her school at the 3Arena. “Silver Slayer is the fashion forward warrior who can drive fear into her opponents with just the chinking sound of her skirt. As she dazzles you with her beauty … watch your back … accessorised with a shield and sword, Silver Slayer is ready to do battle on the catwalk”.

Silver Slayer is modelled by Clara Schubert from Germany, who is spending a year at the Presentation in Clonmel to improve her english. The Transition Year student says: “I’m looking forward to the final because it’s going to be amazing. The experience is enjoyable and very different to anything i've ever done before, but I’m quite nervous too”.

Presentation’s Mairead Magnier Fennel says the excitement builds yearly as students begin the recycling and creating process for Junk Kouture, producing amazing costumes. “This year transition year students designed 12 costumes and five were selected by the judges online to compete at the regional final. The hard work, practice and realisation made for a great night at the University Concert Hall with our 60 supporters travelling from Clonmel,” the art teacher says.

Mairead says Jamie’s costume is very well designed, made with hard work, vision and displays huge attention to detail. “It’s a well finished original design that looks amazing on stage, combined with Clara modelling and performing to Kanye West’s song ‘Power’. Clara has grown so much in confidence and has given 100 per cent to her year in Ireland. Little did she know she would get to perform at the 3Arena. And with Andrea Carroll’s clever make-up and hair design, Silver Slayer is a well deserving All-Ireland finalist costume,” she adds.

Caitlin says it was a “surreal experience” taking part in the southern regional final and then being announced as a Junk Kouture finalist.

“The semi-final was an experience I will never forget as it was one of the best nights I have ever had. The final is going to be even bigger and better”, she says.

Caitlin says being the model puts her right in the thick of the action. “It’s such an amazing and overwhelming experience, and hearing the St. Anne's supporters cheering for us gives me a real buzz. . It was a really proud moment doing the final catwalk after being announced as one of the grand finalists, as all the work we had put into the outfit paid off. It’s a great experience being both the model and a designer,” she notes.

Niamh also says being involved in the semi-final was an “amazing experience”, while praising the other creations in the competition. “There are so many amazing creations, and I’m so thrilled that we get to participate in the grand final. What makes going to the grand final even more special is that we are the first students in Tipperary Town to ever reach the final. I’m really looking forward to the final and seeing my teammate perform on the 3Arena stage,” she smiles.

Jenny says seeing Groovy Garden Girl on stage for the semi-final was “such a proud moment as all our hard work and dedication had paid off” and notes that a bus of 40 will travel from the school to the 3Arena to cheer the girls on.

Patrician Presentation’s ‘Connect’ is the innovation of Transition Year students Emma Cronin, Shauna O’Neill, Mark Hayde, and Jack Spillane. Inspired by vintage Hollywood, the outfit is accompanied by a hat, necklace, earrings and arm jewellery made out of old telephone books and envelopes.

Model Emma says it was “nerve-racking” preparing for the semi-final. “Before I go on stage I have mixed emotions. I was shaking with fear doing my rehearsal, but I still went on the stage and did all the routine. Learning the new routine for the 3Arena is harder than I thought and hope I can pull it off. When I get out on stage, I focus on looking at the judges, doing the routine to the best of my ability and most of all having fun”.

Shauna also says the semi-final was stressful. “I had to do Emma's hair, make-up and make sure everything looks good for the catwalk. I was a little nervous after seeing the other models backstage, but I done my best. Now I'm ready to go to the grand final and do it all over again”.

Mark continues: “It was nice to see the other dresses at the regional final and see how much everyone had worked on their outfits. The atmosphere was amazing throughout the show”.

Jack adds: “Doing Junk kouture is great craic, but it does require a lot of work outside of school. Great determination is needed and you have to be able to visualise what you anticipate the dress to look like. Although we’ve had a few minor disagreements, we work well as a group. It’s a wonderful experience and no better way to finish it off than doing well in the grand final”.

Patrician art teacher Patricia Looby concludes: “This is our 5th time entering the competition, and every year it just gets better with very creative things happening in designing the outfits. More of our students want to go to the final this year as Junk Kouture is becoming a popular event. Our school will be organising a bus of up to 30 or so students, along with parents and family members.”

Tickets for the event are on sale now from Ticketmaster outlets nationwide.