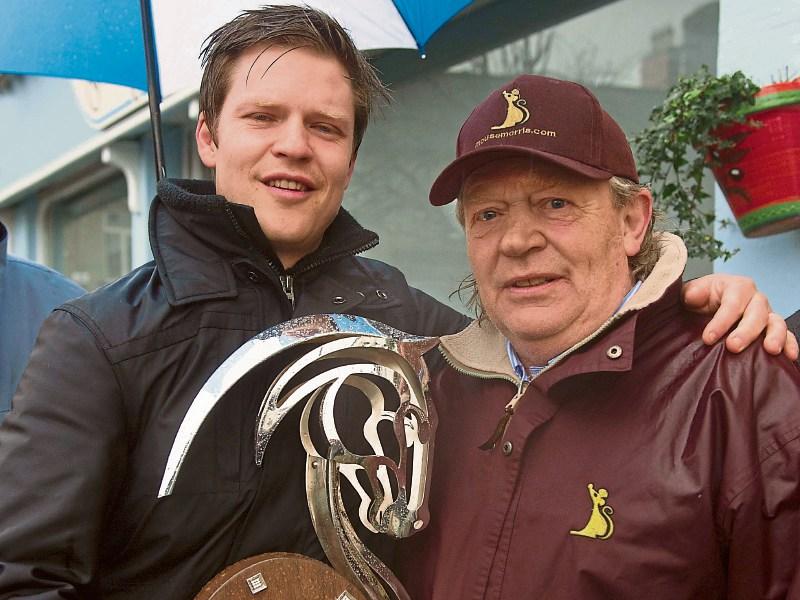 Fethard was en fete on Sunday night as the town welcomed home its Grand National heroes Mouse Morris, Rule The World and the rest of the team that prepared the horse for Aintree glory.

Hundreds lined the streets as Rule The World(right) made his way from Fethard Ballroom across the bridge, along Main Street and into The Square accompanied by his popular trainer who was capping an emotional weekend.

Along with Mouse’s son and assistant Jamie Morris, also there were the stable’s head man Ciarán Treacy, and 19-year-old jockey David Mullins who rode the horse to glory on Saturday in the Crabbie’s Grand National. It was Mullins’s first attempt at the National.

Defying odds of 33/1 and the fact that he’d never won a steeplechase prior to his run in the big race, Rule the World swept to success after the last fence of the gruelling contest, overtaking The Last Samuri and Vics Canvas on his way.

Television footage captured Mouse Morris in tears while watching his charge cross the line and afterwards he struggled for words to summarise his emotions following a year in which he lost his son Christopher (“Tiffer”) in a suspected case of carbon monoxide poisoning in Argentina.

“Life serves up cruel things and good things sometimes, that’s the way it is,” the trainer said at Sunday night’s homecoming in Fethard as Rule The World was getting ready to make his way back to the yard at Everardsgrange outside the town.

He said he was “honoured” to see the huge numbers of well-wishers who turned out to welcome him, the horse and the entire team back to Fethard, in driving rain and biting winds.

“It’s magic, you couldn’t write it. That’s the one we all want to win, we’ve been lucky enough to win the two of them.”