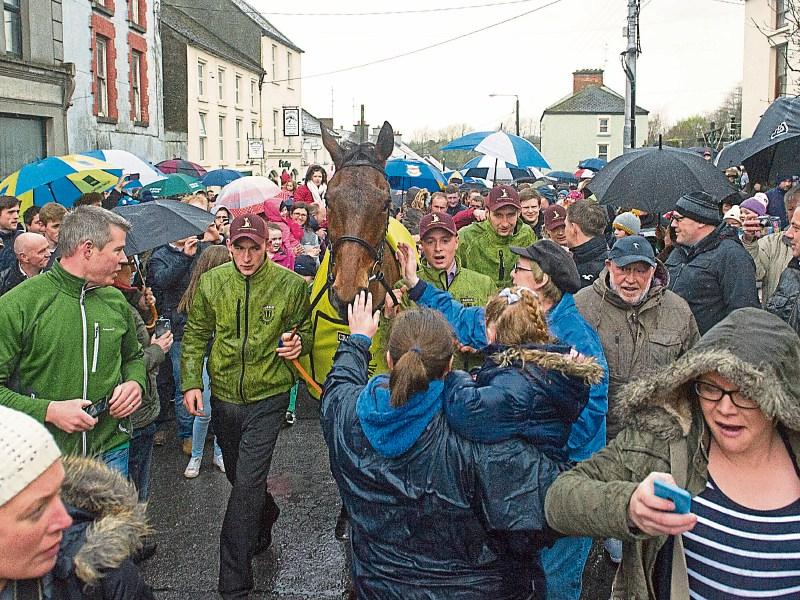 “Nothing can replace the loss of a son, but to win the Irish Grand National and now the Grand National, it shows that life goes on,” the winning owner said as the celebrations got under way on the famous racecourse.

Last June the family was in mourning when 30-year-old Christopher “Tiffer” Morris died while in Argentina, in a suspected case of carbon monoxide poisoning, and his father has said many times in the months since that the tragedy puts everything else, like a horse winning or losing a race, into perspective.

But, as Michael O’Leary said, life must go on and Mouse turned to what he does best, preparing horses for big days in Ireland and England.

The Cheltenham festival witnessed a fine performance by Alpha Des Obeaux in the Ryanair World Hurdle, only to lose out to an exceptional horse in Thistlecrack. Then came the Irish Grand National just over a fortnight ago and this time the Gigginstown maroon and white colours ended up on top, thanks to the Mouse-trained Rogue Angel.

Capping a whirlwind few weeks was Saturday’s victory for Rule The World in the Crabbie’s Grand National, witnessed by a packed Aintree racecourse, 10 million Channel 4 viewers and many more around the world.

“We got a bit of help from somewhere,” the popular trainer said after the race. “Tiffer was working overtime for me.”

Mouse was in demand from the media throughout Saturday evening and Sunday morning but made time to parade Rule The World through Michael O’Leary’s home town of Mullingar on Sunday afternoon before returning to Fethard that evening.

Again he made time to oblige dozens, if not hundreds, of requests for photographs from the huge crowd who filled the streets in poor weather, while the horse himself looked regal and born for such occasions as cameras and phones clicked throughout the homecoming.

The trainer said he was “honoured by the amount of people who have turned out” and added there were no immediate plans for Rule The World, following hints by the owner that he may be retired, having suffered two serious pelvic injuries earlier in his career. “There won’t be a decision made until during the summer. He’ll get a rest now alright, we’ll all get a rest.”

There were “no words to describe” the big win, according to Jamie Morris who said it will take time for it all to sink in. “It’s just amazing to have such support and the response here in Fethard,” he said on Sunday evening. “It’s great for the town.”

The win marked another emotional occasion for the family, he said. “I was saying to friends, if I put my last two years into a book, people wouldn’t believe it. Dad asked Tiffer for a bit of help before the Irish National and he did it and before the English national he said can we ask Tiffer for a bit of overtime… I know he’s pulling the strings up there.”

Jamie said that while music and cooking were Tiffer’s passions, he still took a great interest in the stable’s fortunes.

“Myself and my brother were proud before my father ever trained a horse. This is just indescribable.”