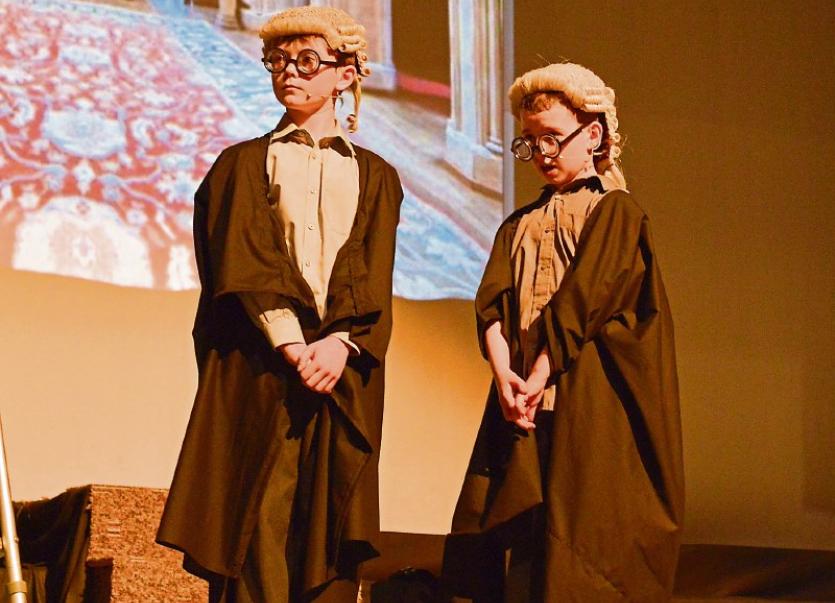 A rousing, rollicking school show drew huge crowds to Tipperary Excel Centre recently to greet the pupils of the Monastery School as they performed their very aptly named “History, Hilarity and Horror”

The beautifully attired school band set the scene with such tunes as “You can count on me” and the Mary Poppins Medley. The opening was further embellished by the Tin Whistle Group and later still by the Company of Campanologists.

The show kicked off with the Pied Pipers revenge on the mayor and the townspeople of Hamelin who were made to rue their broken promise and did well to escape an even worse fate.

There was a timely message too in the very humorous “Boy who cried Wolf”.

Money, they say, is the root of all evil and for poor old Cornelius Michael Moneybody it was a real dilemma, “Where there’s a will there’s a way” this sketch informed us but poor Cornelius was also to learn to his cost that where there’s likely to be plenty of relatives to help solve the problem not to mention the three very shady individuals posturing as solicitors.

For Michael Jackson fans, , this tribute to the man they called “King of Pop” was a real gem. The man that became a global figure in popular culture for over four decades was done full justice in this most delightful scene.

The pupils of 6th class probably stole the show on the night with their nostalgic journey back to the events of Easter 1916. Beautifully portrayed in song and story. From our history books we are all only too familiar with the exploits of Padraig Pearse, James Connolly and others but here for the first time we encounter the human side of that historic week as we come face to face with a behind the scenes view of how the week impacted on the children of the Rising.

The Rocky Horror Show, bizarre ghoulish but also quite funny was not for the fainthearted. It was a daring decision to attempt an hour long show with such a youthful cast but his group rose to the challenge in style . The show which had just about everything even found time to herald coming of the “King” himself who took the stage to rapturous applause.

We haven’t mentioned names, deliberately so, because on and off the stage this was a team effort. To one and all who spent so many tireless hours to bring us such an excellent night’s entertainment we say – Well done again Monastery.