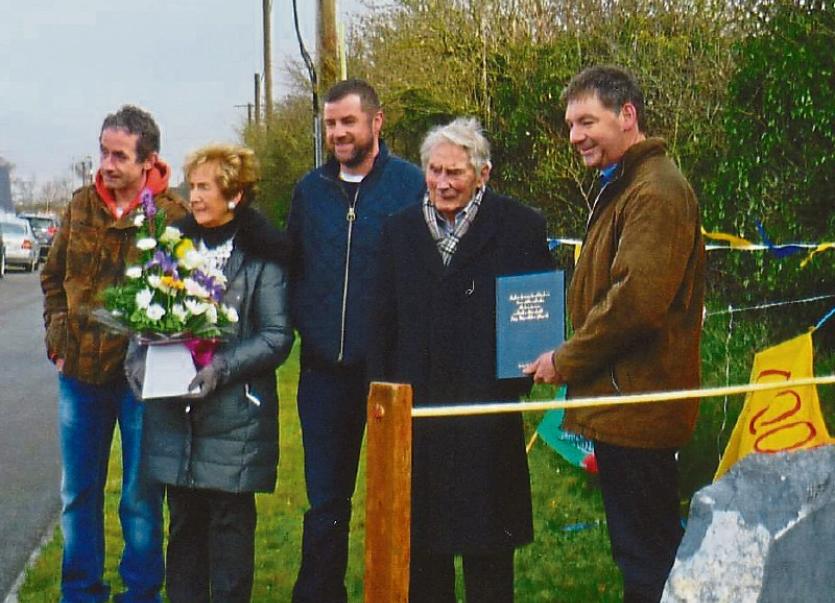 What a great Easter weekend with parades, religious and cultural events highlighted through out Ireland. But in the village of Glengoole the locals and visitors paid a glowing tribute to their own hero, athlete Patsy Fitzgerald. The event well staged and planned will be remembered for a long time.

The sleet showers and wind was appropriate for such an occasion as the man honoured had made his mark so often in such conditions and indeed in warmer climates too. There was pride all round as the area commemorated in stone one of their great and somewhat unsung heroes. A man who won thirty four All Ireland medals in cross country and track & field, representing his country on seven occasions.

The ceremonies were conducted with clockwork precision. Gerry Neville, Sean Treacy Pipe Band, Moycarkey-Borris paraded Patsy from the outskirts to the monument site. Father John O’Rourke did the blessing and said how proud the parish was to have such a great sportsman.

M.C., Mary McGivern in the course of her oration gave a resume of Patsy Fitzgerald’s athletic career, saying he was a sportsman of remarkable talent and ability and brought honour to parish and county in style. Continuing she said it was appropriate that the plaque was displayed near the entrance to Glengoole Community Field as the Fitzgerald family had a great record of generously giving fields for sports meeting, football, hurling, field days and soccer games and she felt it was only right to acknowledge such generosity on this occasion. She outlined the many heroic stories that highlighted his athletic career. Concluding she said that with the record that Patsy holds it was important that everyone knew that the community was the home of a champion and also acknowledged that they were very proud of him for all the honours he brought to them. She said they were indebted to his family, his wife Eileen, (who was presented with a bouquet of flowers) sons Willie, Eugene and daughter in law Helen.

Own Fanning, (Tipperary Athletic Board) who unveiled the plaque said it was a great honour for him. His father and uncles ran with Patsy with Coolcroo A.C., and growing up his father regaled him about all the great athletes from the Killenaule/Slieveardagh area such as John Joe Barry, Jim Sweeney and of course Patsy Fitzgerald. In fact his father was on the team that won the All Ireland in the snow in Belfast when Patsy won the All Ireland individual title. It was an era that athletes had not all the aids that to-day’s athletes have. Then it was common to run over ploughed ground, all kinds of rough terrain, dykes, drains and ditches. The parish was always proud to have outstanding sports personalities such as Patsy, Larry Kiely and Shane Long. He hoped that again Tipperary would reach that pedestal of sport and youth would be inspired by the deeds of the past, and in that past Ireland followed Patsy Fitzgerald. Then it was time for a sumptuous repast in the local hall.

The organising committee wish to thank so many for making a success of the day, (Booklet sponsors) Tipperary Kitchen Holycross; Echo IT; Gleeson Steel Ballysloe; Fosslands Agri services Littleton. Jimmy O’Keeffe Monumental Works Ballysloe who did plaque. Piper Ger Neville, Fr. John J. O’Rourke, Owen Fanning and the athletes that took part in race, The Tipperary Star for publicity. Thanks also to all that helped in any way in the hall. Special thanks to Ann Maire Walshe Tipperary Kitchens for supplying and organizing the gourmet food on the day, Patsy’ s family Wife Eileen, Sons Willie, Eugene, Daughter in law Helen. Sisters; Madge Russell, and Jo O’Connell.

An Easter Sunday that will not be forgotten in the foothills of Glengoole and Tipperary athletics.