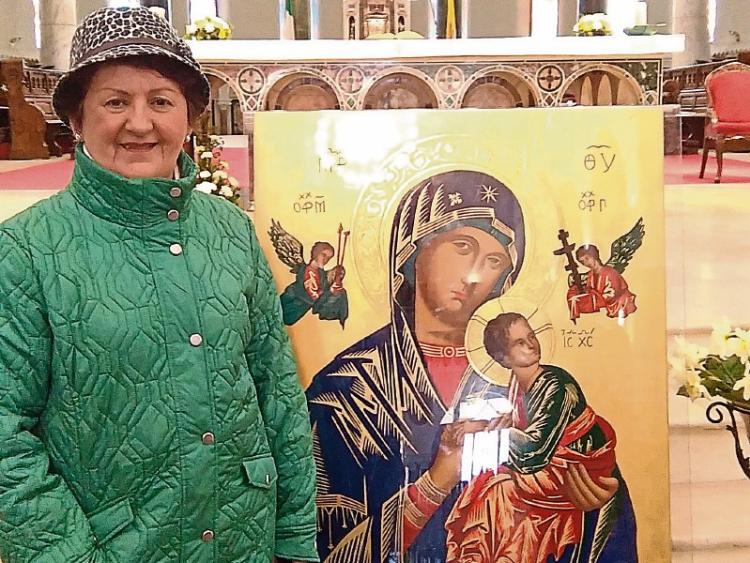 Large crowds gathered at the Cathedral of the Assumption in Thurles last week to pray with a blessed icon of Our Lady and join the Redemptorists in their 150th celebratory year of devotion to Our Lady of Perpetual Help as trustees of the Icon.

The icon was blessed by Pope Francis in Rome on March 23, before setting off on its pilgrim journey to Ireland and its tour of 26 cathedrals in the country.

Throngs of people flocked to Limerick to greet the pilgrim icon on the first stage of its journey before it arrived in Thurles last Tuesday evening.

A total of seven services were held over the two days in the cathedral town including a celebratory evening mass, healing prayer service and a morning mass for primary school children.

To mark the 150th year of devotion to Our Lady of Perpetual Help, the Redemptorists set out on a nationwide pilgrimage of 26 Cathedrals across the country.

The Icon, which was first officially recorded in 1495 however is thought to be much older, has been enshrined in Rome since 1499. The Redemptorists became caretakers of the icon in 1865 as well as missionaries helping to spread the message of devotion to our Lady of Perpetual Help throughout the world. The first copy of the Icon to arrive in Ireland has been venerated in the Redemptorist Church in Limerick since 1867.

The two day celebration was led by Archbishop Kieran O'Reilly as well as Redemptorist Fr. Michael Cusack from St. Joseph's Church, Dundalk who called on those present to “pray for those who have wandered away from God.”

“It is an unusual piece of art as it is not considered to be drawn or painted, instead the icon is written. We hope that the time spent with the icon will help to deepen the faith,” said Fr. Cusack.

The Icon will return to Tipperary on April 23 and 24 when it will visit Holycross Abbey which has strong connections with the Redemptorists through the annual Solemn Novena.